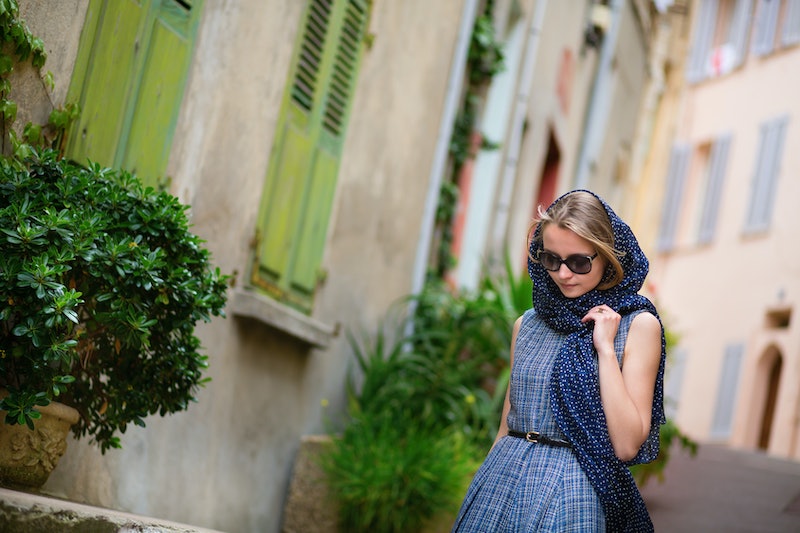 Every woman, everywhere, knows that look. You recognize it after a certain age, usually somewhere around your twelfth birthday — it sinks in the way a new language does, when you eventually understand a full sentence without needing to decipher each word. For years, I’ve been filling out the “Foreign Language Proficiency” sections of college applications and resumes without mentioning that alongside French and Russian, I have unwittingly become fluent in Perv.

Guys don’t have to grab me, follow me, or say more than, “Hey, honey” or, “Have a nice day, Baby” as I pass; I’ve learned to discern the threatening tinge that’s almost always implicit when men choose to bounce supposedly “friendly” words off of women they’ve never met.

I just wanted to walk 10 blocks without some crusty asshole staring me up and down with that specific, searching look that says so clearly, “You are in the process of graduating from 'person' to 'thing,' and this is your commencement ceremony.”

When I was 13, I genuinely believed that if I were just less awkward — less chesty, less clumsy, more able to blend in on a busy New York street — men old enough to be my grandfather wouldn’t look at me the way they did. I blamed my body, my mind, my clothes — everything except the men who were actually making me feel like shit on a regular basis.

Their intentions didn’t really matter to me then. I just wanted to walk the 10 blocks from my house to buy a pair of soccer cleats without some crusty asshole staring me up and down with that specific, searching look that says so clearly, “You are in the process of graduating from 'person' to 'thing,' and this is your commencement ceremony.”

As I got schooled in feminism and learned to hiss “Fuck off,” street harassers ceased to make me miserable. I realized that I wasn’t obliged to play the role of “young female extra” in some catcalling dickbag’s fantasy. Unfortunately, the dickbags themselves didn’t join me in that realization.

I understood that because of what their words might lead to, the things I wanted to do — walk from Brooklyn to Manhattan at night, a Greyhound bus around the country the summer after high school — weren’t any safer just because I’d listened to Le Tigre, affixed a “Riot Don’t Diet” button to my backpack, and had learned to swear.

I’ve been lucky enough to travel a fair amount over the past few years — I spent four months in St. Petersburg last winter, and this summer, I’m living and working in Berlin. Every time I set out solo, though, a Sylvia Plath quote comes to mind:

My consuming desire is to mingle with road crews, sailors and soldiers, barroom regulars — to be a part of a scene… all this is spoiled by the fact that I am a girl, a female always supposedly in danger of assault and battery. My consuming interest in men and their lives is often misconstrued as a desire to seduce them, or as an invitation to intimacy. Yes, God, I want to talk to everybody as deeply as I can. I want to be able to sleep in an open field, to travel west, to walk freely at night…

When I arrived in Germany — a country I’ve never visited before, whose language I don’t speak — I immediately began feeling that unscratchable itch to “mingle” that Plath describes. I don’t want to hide out in a comfortable American cocoon; I want to walk into a bar, order a cheap drink, read my book, and talk to strangers without feeling like I have to play the part of "the girl in the room." It's a role most of us women know well, one that requires us to put on the passive, pleasant, nonthreatening invisibility cloak we learn to don when we venture out alone — whether it’s to the farthest reaches of the world, or just to the deli around the corner.

It’s 9:25 p.m. in Berlin right now, and I’m sitting in a cafe in Mitte, wishing I could just walk home comfortably when I finish writing this. I could watch the sunset, digest my massive, cheesy spaetzle dinner, dip into raucous bars to catch the last few minutes of the World Cup game. But I can’t, because I’m far from my home in a woman’s body. Because if I were attacked, I know the first question I’d be asked: “Why were you walking home alone at night?” Because the grasp at freedom just isn’t worth the fear.

Not being able to walk home alone is far from the worst restriction placed upon women — what scares me, though, is that I’ve been taught to let this limitation go unchecked. I’ve folded the potential danger that my gender opens me up to into my interaction with the world around me, just like I did as an uncertain teenager, passively accepting the role that adult men on the street assigned to me.

I still want to "sleep in an open field," to "travel west," and most of all, "to walk freely at night" — not out of a desire to blend in for the sake of journalistic integrity, but because knowing that I can’t do these things feels unbearable. I wish that total freedom for young women and girls traveling the world, or simply walking down the streets of their neighborhoods, wasn’t still spoiled by shady, imposing smiles from strange men. Because sometimes, you just want to walk alone.

More like this
6 Organizations Fighting Police Brutality That You Can Support Right Now
By Syeda Khaula Saad and JR Thorpe
These Artists Are Reimagining Black History Month To Create A Better Future
By Katie Mitchell
25 Inspiring Quotes From Black Women To Celebrate Black History Month
By Kyli Rodriguez-Cayro and JR Thorpe
19 Instagram Captions For Celebrating Black History Month
By Ayana Lage
Get Even More From Bustle — Sign Up For The Newsletter
From hair trends to relationship advice, our daily newsletter has everything you need to sound like a person who’s on TikTok, even if you aren’t.