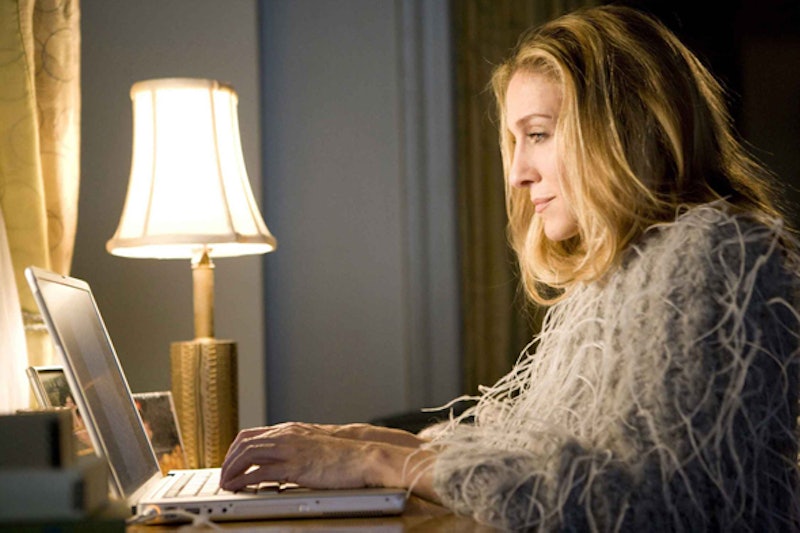 Here are some good things about writers: They're empathetic. Reading all that fiction has made them incredibly sensitive to things like sorrow, inner darkness, loneliness, and struggle — so if you cry, they'll cry too. They're smart, opinionated, and unless they're painfully awkward, they're pretty fun at parties. They love making Lost Generation-era cocktails and arguing about ideas, but they're not averse to gossiping, especially about the literary world. They'll complain about Amazon's stranglehold on the traditional publishing industry and James Franco's writing career-type thing for hours, as long as you keep refilling their glasses.

Here are some bad things about writers: They're solipsistic. They'll use the word “solipsistic” in conversation without bothering to define it, as though they and their vocabulary are the only ones that exist (... which is called solipsism). They read novels so they can say they've read them, not because they genuinely wanted to read them. They're bad with deadlines. They're pretentious. They think the world owes them a book deal.

Alas, a terrible writer must fall into every struggling writer's life, and these are 13 of the worst ones out there. If you recognize one of these people at your local coffee haunt, waving their latest draft at you like it's the New York Review of Books and they're on the cover, grab your espresso and run.

This dude doesn't think he's a better writer than you — he knows he's a better writer than you. See, you're a woman, and he simply doesn't have the time to read your essay about massaging shea butter onto your nursing bra. Naturally, he assumes that you're interested in his writing — because he's the Alpha and the Omega of strong narrative prose — so he'll generously take the time to pass down a few nuggets of Bro Writer Wisdom, like "write what you know" and "kill your darlings." Capiche, hun? As he drones away, he'll gnaw on canapés with his mouth open while staring across the party at someone he thinks is more interesting than you.

2. The Millennial Writer Who's Offended That You Just Kinda Sorta Compared Her to Lena Dunham

Sure, she's writing a TV pilot about a group of twentysomethings in New York City that's "like Sex and the City, but smarter and more realistic." She's also working on a memoir about life as an educated 26-year-old with some student loans, because putting her issues with money and men "out into the world" is the best thing she can do for other people. But God help you if you timidly suggest that Lena Dunham is one of her influences. "That bourgeois sell-out?" she'll snipe. "She's not the voice of my generation." Then she'll scurry off to another coffee shop to write another essay about being a Millennial struggling to pay rent in New York City while making mistakes in public and exchanging quips with hipster boys.

3. The Writer Who Name-Drops Like It's Going Out of Style

She's taken a really fantastic workshop with Tao Lin and once discussed a mutual hatred of early Saul Bellow with Sam Lipsyte and Zadie Smith at a really fantastic Paris Review cocktail party that wasn't quite as good as the Prohibition-themed party thrown by ZYZZYVA a few months ago.

4. The "Esoteric" Writer Who Only Reads Things in German

He "hasn't heard of Twilight," despite the fact that he's a human and has eyes. He's "not on Facebook," but he's all over Twitter. He thinks Pablo Neruda's love sonnets are "cheesy" and Lolita is "more or less pulp fiction." He was born in Idaho but likes to roll his eyes about "American ethics" while talking about the time he lived in Berlin (spoiler alert: it was one summer and he was 12).

Her Twitter bio reads "Dreamer. Thinker. Words are my everything," but she hasn't written a full draft of anything since that time in college when she took a writing class. She talks about putting together a writing group, because she "totally needs the support," but she'd rather talk about writing than actually write. At parties, she introduces herself to people as though she's going to quit her day job at any minute: "Well, I work as a brain surgeon to pay the bills, you know? But I'm actually working on a novel about a brain surgeon who quits her job to work on a novel." Unfortunately, the only evidence of this "novel" is four or five Tweets with the hashtag #amwriting.

6. The Writer Who Loves to Bemoan the Difficulty of His Craft

This tortured soul loves to weep about how agonizing the writing process is, while insisting that he could never be anything but a writer. "Creation is the force that drives me," he murmurs, staring vacantly at a flickering candle, while thinking of a great metaphor about flickering candles that he'll use in a blog post later. "Sometimes I just want to relax in front of the TV, but then I glance over at my typewriter in the corner and I can almost hear my characters begging to be written. I wish I could escape this gift. I really do. But it haunts me."

7. The Non-Writer Who Just Wants the Trappings of the Writing Lifestyle

This person doesn't care about proofreading or Freytag's pyramid. He just wants to take selfies in front of a typewriter. He wants to go to Paris and feel Bohemian; he wants to smoke cigarettes while discussing Gravity's Rainbow; he wants to flirt with alcoholism but, like, in a sexy way. Mainly, he just wants to be able to call himself something cool at his high school reunion, and it's easier to fake being a writer than it is to fake being an Olympic athlete.

8. The Writer Who Confuses "Being an Artist" With "Being Artsy"

You'll find this creature floating through art galleries and referring to "writing as performance." She loves to talk about "compelling spaces" and refuses to "define herself by a genre" although what she writes is clearly confessional poetry. She spends a lot of time getting dressed in the morning and owns an Etsy print that says "Create or Die." Most of her writing doesn't make a lot of sense, because she insists on presenting it in collage form, but she's great at using buzzwords like "renegade" and "collaborate" and "moon."

9. The Boring Writer Who Had the Billion-Dollar Idea That You Didn't

There's nothing elegant about this dude's prose, but it doesn't matter, because he literally has 4 million Twitter followers. That's what happens when you write the screenplay for Transformers 5: Autobot Rising — you get rich. While drinking at dive bars, you find occasional catharsis in complaining about his "stilted dialogue" to your other non-successful friends, but at the end of the day it kills you that he's hobnobbing with Spielberg and you still haven't left your day job even though you were clearly better than him in that one MFA workshop you took together.

10. The Writer Who Can't Accept Criticism

She asked you for feedback on her manuscript, and you — like an idiot — actually gave her feedback. As soon as you told her that her ending wasn't "earned," the room grew silent and you could actually hear her blood beginning to boil. Sure, she smiled and nodded and thanked you for your fantastic advice, but you could see her fingers flying rapidly over her phone, texting her favorite hit-man a precise description of your outfit. Look who earned her ending now.

11. The Ladder-Climbing Writer Who Doesn't Have Your Best Interests at Heart

She ignored you for years until you had that one piece in Salon and now she's all up in your Facebook messages, asking you what's new.

12. The Writer Who's So Much Better at Networking Than You'll Ever Be

How does this brave soul do it? As you huddle in the corner at AWP, terrified of approaching the Indiana Review editors, this dude strides past you with his bag of writer swag and his broad, white smile — and picks up a handful of prime freelance assignments, an agent, and 25 business cards in the time it takes you to remember that one cute editor's name.

His first novel was ripped apart, he can't get a shred of publicity for his second, and he is taking out his anger in the comment section of your latest think piece. You have every reason to suspect that his latest Facebook rant — "Makes me sick seeing all these hacks who've never read DeLillo getting paid for their glorified blog posts" — is directed at you, too. Somehow, this dude has someone decided that YOUR not-very-impressive career was supposed to be HIS, and he won't stop until he makes you feel as terrible as he does. If you're a gracious person, you'll read his second novel and send him a email telling him how much you respect his careful prose. If you're a bad person, you'll really put the nail in his typewriter by writing the script for Transformers 6: Machines 'R' Us and becoming a millionaire.