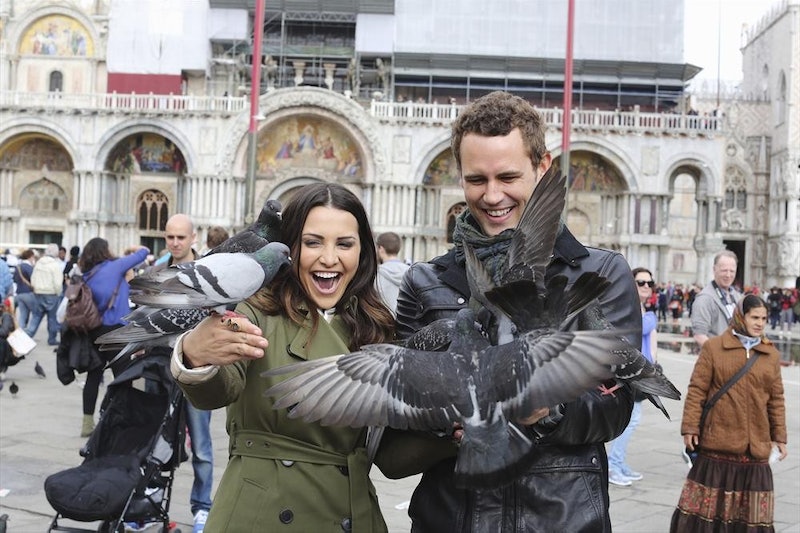 Editing is a hell of a tool. With the right soundtrack, anything can become the act of a villain or a romantic moment. And no one knows that better than the folks behind The Bachelor and The Bachelorette. On the last episode before hometown visits, The Bachelorette's Nick Viall pulled a Courtney Robertson (or a Clare Crawley) and snuck some non-format sanctioned one-on-one time with Andi, the woman he is falling in love with. Apparently, when a woman does it on this show, she's being "trashy" and when a man does it, he's "creepy" and "arrogant." This totally normal dating move is apparently the worst possible thing Nick could have done.

But I call bullshit. There's this strange thing that happens when a bunch of men (or women, on The Bachelor) live together while vying for the heart of one woman (or man, also on The Bachelor): people become friends with their fellow contestants and when one person inevitably notes that it's weird to cheer on other people going on dates with the person for which they're falling, they become that season's villain. Now, sometimes people are worthy of being a villain — like the guy on Des' season who said he could be the next Bachelor or Tierra the nightmare on Sean Lowe's season — but Nick isn't exactly someone who belongs in that category.

Sure, he may not be everyone's cup of tea, but Nick is no bad guy. Yeah, he broke the "rules" to steal Andi away, but as the woman herself points out: "They should want to come sneak over. Like this is Week 7, go for it." Technically, it's not fair, but this whole allotted time process isn't natural. In the real world, if a guy didn't take initiative and do everything in his power to spend more time with the woman he was seeing, she would surely doubt his interest. So what if Nick goes outside The Bachelor and Bachelorette process? Is this some sort of ultra-conservative courtship? Hell no. We all know what happens in the Fantasy Suite, ABC. Have at it, dude.

And while it's not normal to ask the front desk for someone's hotel room key, it's also not normal to send two people who are dating on a romantic getaway during which they can't share rooms (or know where the other is staying). And that's before we even deal with the multiple romantic partners part of the whole equation. None of this is normal and everything is creepy when you drape a scene in a villain-worthy soundtrack. Nick is not a creep for wanting to spend more time with a woman he has feelings for and he's certainly not guilty of not being "here for the right reasons" because he can't stomach the idea of another man ending up with Andi. Spoiler: that's how emotions are supposed to work.

It's clear that ABC is just convincing us to turn on Nick so that we support the other guy Andi likely ends up choosing to spend her life with. If you want someone else to win, that's totally cool. If Nick isn't the guy you would personally choose, that's totally valid. If you agree with the other guys that Nick's propensity for strategy in surpassing his competition for Andi's affections (weird enough as it is) is somehow sinister, then I'm a little worried about you. But don't tear down some average Joe because it's hard to process Bachelorette emotions without a villain. If you insist on doing so, maybe you're not here for the right reasons. Ever think about that?