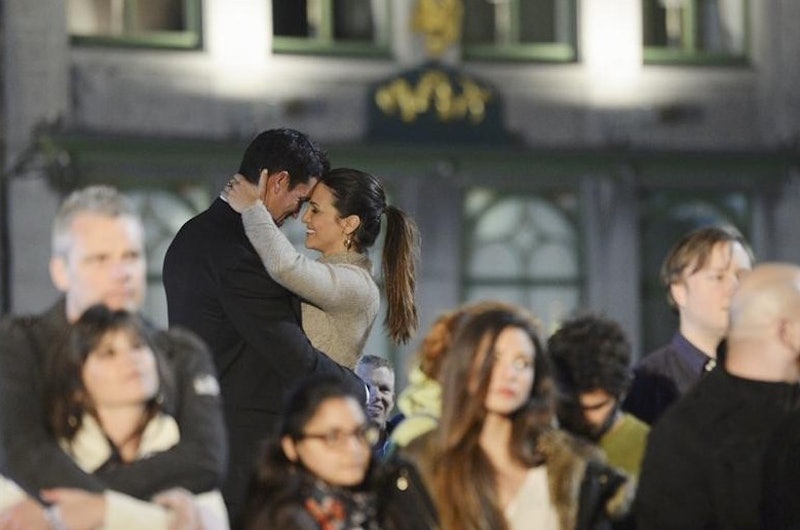 The Bachelorette's Andi Dorfman goes back and forth on how she feels about Josh Murray basically every episode, but tonight their relationship got a huge boost when he revealed he's falling in love with her. Love aside, we don't blame her for being unsure about him every week because we feel the same way. Can we trust him? Can she trust him? Could he look like any more of a douche when wearing a scarf?

Last week Josh did himself a huge disservice when he attacked Andi's choice for the group date: making the men do lie detector tests. That was a huge no-no because first of all, it's highly doubtful that Andi chose that date. More likely a Bachelorette producer set that one up. Also, it made Andi nervous that he had something to hide because he was so relieved that Andi ripped up the results and didn't read them.

Coming into this week we weren't sure Josh could get himself back in Andi's good graces, but when he dropped that L-O-V-E word Andi seemed to forgive and forget. As a critical analyst for reality television, (quite the title, right?) I'm not going to jump back on baord the Josh train so easily. First of all, unlike Marcus, Josh didn't say, "I love you," but instead said, "I'm falling in love with you." As we know from the 10 stages of Bachelor love, that line usually means the guy is too scared to admit he's actually in love. Should Andi choose a guy who's unsure when she has at least two guys (Nick and Marcus) that are already all in?

Plus, let's not forget how smooth Josh is. He's dropped more one-liners than a drunk college guy at a bar. Problem is that they're working. Every time Andi starts to doubt her relationship with Josh he manages to talk her back in.

I'm not saying he's not a good guy, I just think Andi should exercise caution. She was ecstatic that Josh revealed his near-love feelings, but she should maybe examine why he didn't just come out and say he loved her without any shame or fear? And don't forget, he's possibly hiding something that the lie detector test could have revealed had she read the results.

I'm not as sold as Andi is, but I'll wait until hometowns for my final judgements. Although I have to say it's not looking good for this athlete.