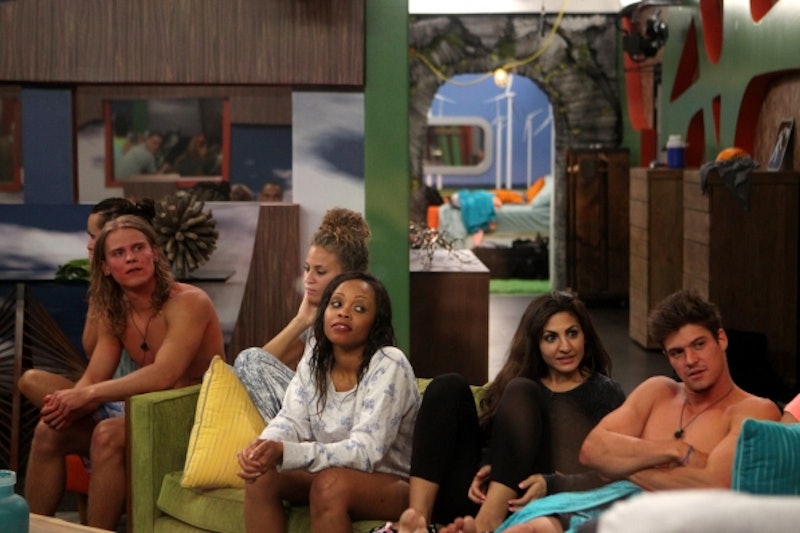 If you've been a longtime fan of Big Brother, then you've known since the cast of season 16 was announced that we were getting a famous relative in the form of Ariana Grande's half-brother Frankie Grande. If you only just started watching Big Brother, you'd still know that Frankie Grande is Ariana Grande's half-brother. He says it about a hundred times during the two night premiere, after all, because he might not want the rest of the people in the house to know about it but he definitely wants to make sure the audience knows about it. Frankie Grande and Ariana Grande definitely look alike and, in examining that, we found that the original eight house guests had doppelgangers of their own.

However, an additional group of eight house guests was added during the two-night premiere. Joining Frankie, Donny, Cody, Amber, Paola, Nicole, Devin, and Joey were Brittany, Caleb, Christine, Derrick, Hayden, Jocasta, Victoria, and Zach — twice the alliances, twice the Heads of Household, and twice the drama. There are no famous relatives among the second group of eight, but they are not without doppelgangers of their own. If you found yourself doing a double-take during the premiere, then you are not alone.

Brittany and Amy Schumer have the same chin and their lips pop in the same way when they wear dark lipstick. That, plus their hair, is enough to give me an eerie sense of déjà vu.

As soon as I saw Caleb's soul patch, I immediately thought of Zac Efron when he was trying the soul patch look. Thankfully, Zefron eventually shaved that thing off before I started crying. Caleb should really consider doing the same.

Christine looks exactly like Jennifer Aniston when Aniston is wearing her glasses, except her nose is a little bigger and her hair is a little longer. No one will ever convince me that this is not a fact.

Derrick and Cameron from Modern Family

Derrick looks, to me, like a younger version of Cameron Tucker from Modern Family. They're even wearing color-coordinated shirts in these two pictures. Look at the future, Derrick.

Hayden and Shaggy from Scooby-Doo

I'm not saying that Hayden could stand-in as Shaggy Rogers in the next live-action Scooby-Doo movie, but I am saying he should consider it if and when he gets eliminated.

Every time I see Victoria, I have to do a double take because I'm wondering how Victoria Justice found the time to star in Big Brother season 16. They even have the same first name!

Zach and Sonic the Hedgehog

Was I the only one thinking it? I mean, where else did Zach get that hairstyle from? Personally, I think it looks better on Sonic.