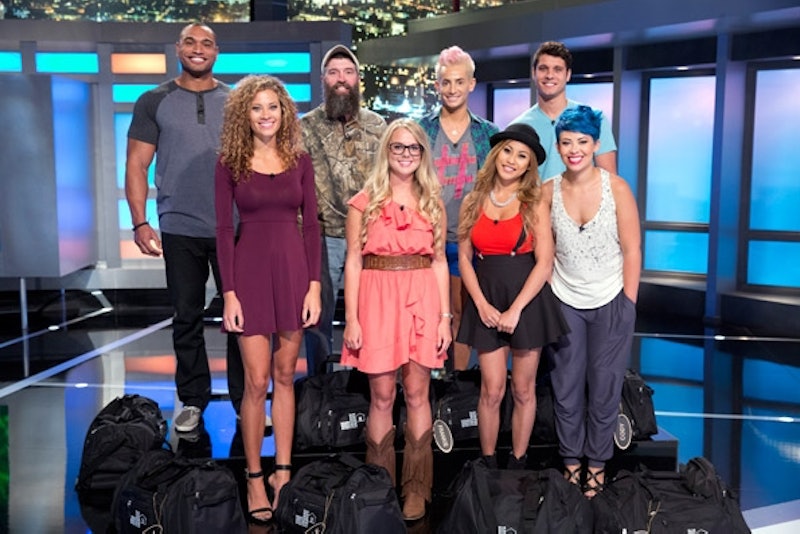 Long before the season premiere of Big Brother 16 Wednesday night, the Internet was abuzz with the reality show's celebrity connection this year. No, Rachel Reilly has not returned to compete on the CBS show for the gazillionth time. Frankie Grande, the half-brother of pop sensation Ariana Grande and famous in his own right for his YouTube antics, is one of the houseguests on the show. Now that the premiere has come and gone, we can all die happy knowing that not only did Frankie name drop his sister, but her voice also appeared in the episode to wish him well.

Even though Frankie has said he's going to try to keep his famous relative on the DL while in the house, which is a smart move considering having any sort of fame or wealth connections can make you a target, it's impossible to deny the resemblance. He may have died his hair platinum blonde with a bubblegum pink topping, but when we stare into Frankie's deep brown eyes and see that defined chin, all we can see is Ariana.

But Frankie actually may have some competition in the famous looks department. While I'm not sure if any of the houseguests have the same star connections as Frankie, with the exception of Donny, who was the janitor at Kellie Pickler's school in North Carolina, the first eight contestants to move into the Big Brother house certainly do look familiar. Are we actually watching Celebrity Big Brother , like they have in the U.K.? Not quite, but here are the famous doppelgangers that immediately came to mind after meeting the first eight houseguests Wednesday night.

To start off, we've got the most obvious one. Brother and sister? More like fraternal twins, if you ask me.

Donny and Anyone from Duck Dynasty

Although Donny's last name is Thompson, his southern accent, camo-wear, and beard for days make him seem like his surname should actually be Robertson of the famous Duck Dynasty clan. I honestly cannot tell any of the men of that family apart, so he literally looks like any one of them. Just pick one.

Cody and John Travolta in Grease

Many people on Twitter pointed out during the premiere that Cody looks like John Travolta's Danny Zuko, and I'd definitely have to agree. Just add a leather jacket, and it could be Greased Lightnin'!

Amber and Nik or Nastasia from America's Next Top Model

I swear, every time I see Amber in a photo or on screen, I think it's Nik from Cycle 5 or Nastasia from Cycle 19 of ANTM (pictured above). Their golden curly hair and model figures are really just so uncannily similar. Since Amber is actually a model, I think she should just listen to the universe and appear on ANTM already.

Paola's hair may be a bit longer, but she and TV personality Jeannie Mai sure do look alike. Considering Paola is a DJ, she probably also knows how to pump up a crowd like Mai.

Nicole and Garth from Wayne's World

Sorry, Nicole. Whenever I see long, blond hair and thick, black glasses, my mind immediately goes to Garth, even if others see more of a Taylor Swift resemblance. But don't worry, you're defintiely a lot prettier than Garth.

Devin and Dwayne "The Rock" Johnson

Devin said what we were all thinking during the premiere, that he looks a lot like Dwayne "The Rock" Johnson. He even did The Rock's signature eyebrow lift to really drive home the resemblance.

With her electric blue pixie cut, Joey and Sailor Mercury must go to the same hair stylist. Although, their similarities are probably more superficial as Joey seems to be a lot more hyperactive than the mild-mannered Sailor Mercury. There's also the fact that Sailor Mercury isn't a real person, but who's cares?