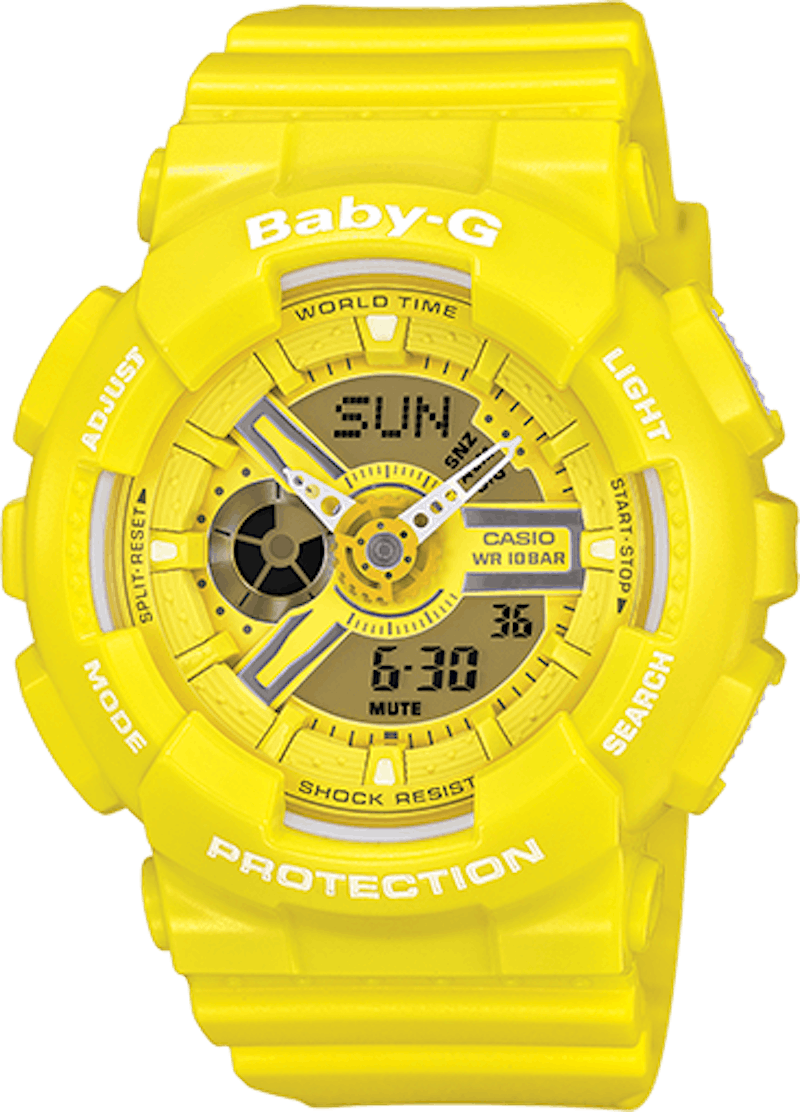 If you belong to the Millennial generation, chances are you have at some point owned a Baby G watch. However, if you packed away your Baby G ten years ago upon deciding it was just too juvenile, you may want to dust off your now-vintage timepiece, because Baby G is back. I'm calling it.

Baby G took the world by storm in 1994 when parent company Casio released the watch with its oversized, plastic dimensions and neon shades as an updated version of its G-SHOCK watch, convincing 13-year-old girls everywhere that this was the watch to end all watches. The Baby G seemed to be the sartorial equivalent of a mood ring, with a color and style for every temperament, and now it appears the company is poised to take the fashion world by storm again with its new designs. Feeling minimalist? The transparent option of the Baby G BA110-7A2 is as close to subtle as the label permits. Looking to embrace spring with pastel accessories? The BA111-4A2 with its delicate salmon band adds a pop of color. And if your heart is still in 2002, Baby G’s BGA170-7B2 is “#classic” according to the new Baby G Twitter page. If you’re asking yourself why Baby G has a Twitter account, it’s because the unthinkable has happened: Baby G is back with a vengeance. Granted, the company’s Twitter only has 682 followers, so the Baby G empire hasn’t quite hit yet, but the little brand that could is determined to regain its former place of pride amongst watches.

The watch manufacturer has shrewdly seized upon 2014’s collision of technology and fashion, a partnership which has yielded such products as the Google Glass and FitBit, which seek to be both functional and fashionable. Sci-fi aficionados saw this trend coming decades ago, and though I’m still waiting for a headband that displays my thoughts, the revolution appears to be nigh.

Enter (or in this case, re-enter) Baby G, a company which flourished during the flashy, clunky, and future-obsessed early aughts. And while Baby G achieved maximum product-coveting during that time, its target consumers outgrew the design and the concept. Now, however, with athletic-looking fitness trackers and other gadgetry on the rise, Baby G fits right in to fashion’s new order. The company's Twitter page reflects its goal of uniting fashion with fitness and technology, regularly tweeting encouraging fitness ideas and encouraging consumers to indulge in what they refer to as #fitfashion. And if the weekly exercise suggestions weren't enough, star surfer Alyssa Wooten partnered with Baby G to create a video documenting her active lifestyle, of course made easier with her brand new watch. Some of fashion’s finest have already jumped aboard the G train with Wooton; Sky Ferreira and Chrissy Miller are featured in the brand's advertisements, and what appears to be the cast of Pitch Perfect 2 rock sleek black versions in a Twitter pic. Not to be outdone, Kesha also loves to showcase her collection of Baby G's, and back in 2010, Rihanna was proud to show off five G-Shock Mini's in her "Rude Boy" music video.

For those who desire a sleeker look, the brand also offers neutrally-colored bands in black and beige like the BGA151LP-1A, with a metallic leopard print face for the especially adventurous. And for couples out there who enjoy wearing matching ensembles (apparently they do exist), the Baby G website assures consumers that the watches “are easy to match into his-and-hers pairs”.

The future of Baby G remains to be seen, so don't start fretting over the trend just yet. For a mid-range price between $79 and $180, purchasing a Baby G timepiece isn't an unthinkable investment the way a Tag Heuer or an Omega would be, but do remember that in another 10 years, you may fondly recall round two of that crazy Baby G trend.