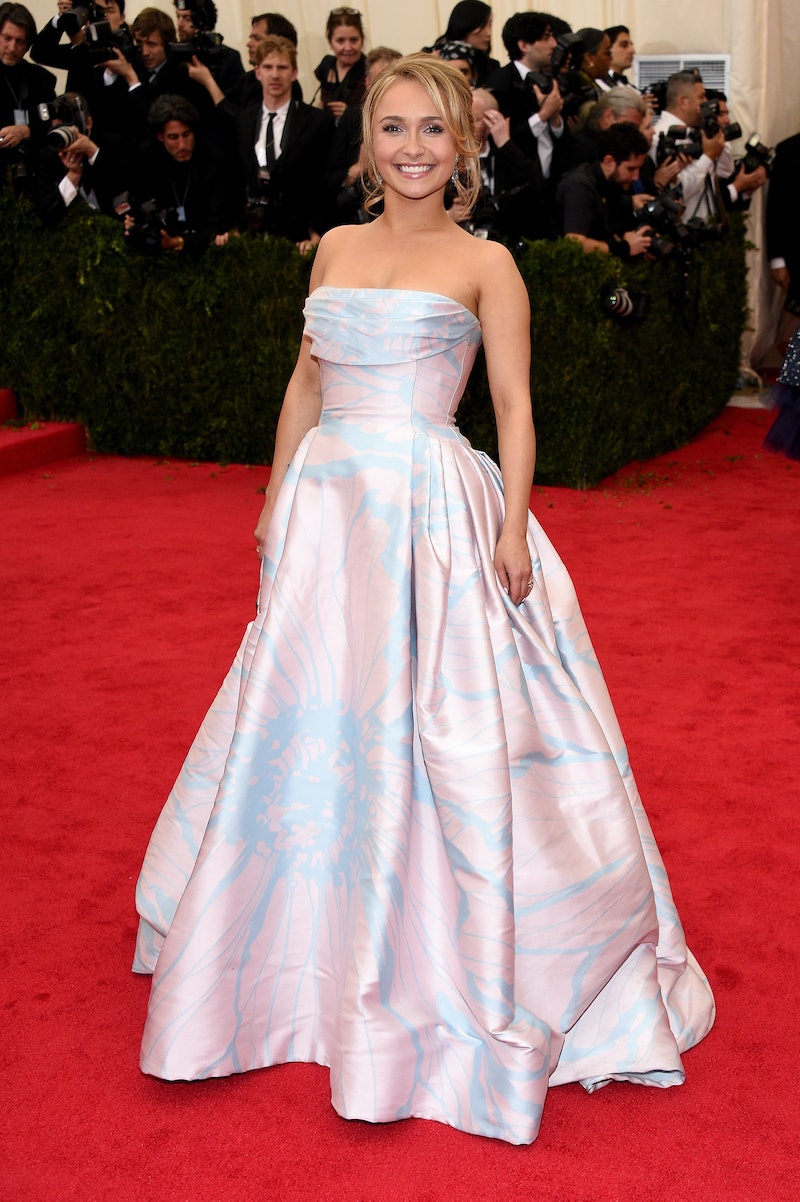 Last May, news broke that Hayden Panettiere is pregnant with her very first child with fiancé Wladimir Klitschko, which sent the internet all atwitter. (No, literally, it was all over Twitter, you guys.) And ever since then, two very important questions have come across our minds — one, of course, being how the heck is a baby going to fit inside someone so tiny?! But the other, much more pressing question is — how will Nashville handle Panettiere's baby bump in Season 3? Update: According to TVLine's Michael Ausiello, Juliet will be pregnant next season.

From what we’ve already deduced, Panettiere isn’t really that far along in her pregnancy, which means her baby bump will only become more prominent as the cameras roll for the upcoming season. Granted, it’s not like this is unfamiliar territory for ABC, who just last year juggled the pregnancies of two A-list stars: Kerry Washington (Scandal's Olivia Pope) and Ginnifer Goodwin (Once Upon a Time's Snow White). So what’s Juliette Barnes’ fate now that the actress is expecting? Let’s look at our options, shall we?

One obvious choice would be for the writers to use this as an interesting plot twist for Juliette’s character. Her relationship with Avery may be a little rocky at the moment, since she cheated on him with Edgehill sleaze Jeff Fordham, but what would happen if Juliette suddenly became pregnant? Which guy would be the lucky father-to-be? The possibilities are simply endless, y’all. Plus, the idea of seeing a mini-Juliette running around singing country songs does sound pretty amazing. That’s a true mother-daughter act in the making right there.

Of course, the show could choose to go with the whole hide-and-seek approach, hiding Panettiere’s growing belly behind furniture, baggy clothes, and extremely close camera angles. Sure, some of the tactics are completely obvious (not to mention borderline ridiculous), but at the end of the day, it gets the job done. We should all start preparing ourselves in advance for Juliette’s sudden interest in lampshades and bulky overcoats.

Accidents happen, especially on a drama series. So if Juliette were to suddenly get seriously injured and find herself in the hospital, it’d be very easy to hide any changes to her shape. Let’s face it — hospital gowns aren't exactly form-fitting, so a few months of lying around in bed could be enough to get the job done. And just think of all the sass she'd be able to give the doctors and nurses. Problem solved!

As Peggy Kenter proved earlier in the series, it is apparently completely possible to fake a pregnancy on this show as long as you’re still around to carry it out (RIP Peggy). In an attempt to win Avery back, Juliette could lie and pretend to be pregnant with his child. Granted, this one's a bit of a stretch, but we wouldn’t put anything past this show.

Then there’s always the “out of sight, out of mind” approach. Juliette could get offered an amazing tour opportunity abroad, temporarily taking her character out of the Nashville equation during the particularly showy parts of her pregnancy. Ideally though, we’d prefer any of the other options over this because, honestly, a season without Juliette Barnes is a season we have very little interest in watching.

We need that sass in our lives.

More like this
At 14, Kate Berlant Had A Wheelie Backpack & One Line In 'Lizzie McGuire'
By Samantha Rollins
Don't Expect To See Your Fave Modern Royals Depicted On 'The Crown' Season 6
By Jack Irvin
Everything To Know About The Bear Season 2
By Brad Witter
Vanessa Hudgens Proves She's Always A Wildcat At This 'High School Musical' Location
By Alyssa Lapid
Get Even More From Bustle — Sign Up For The Newsletter