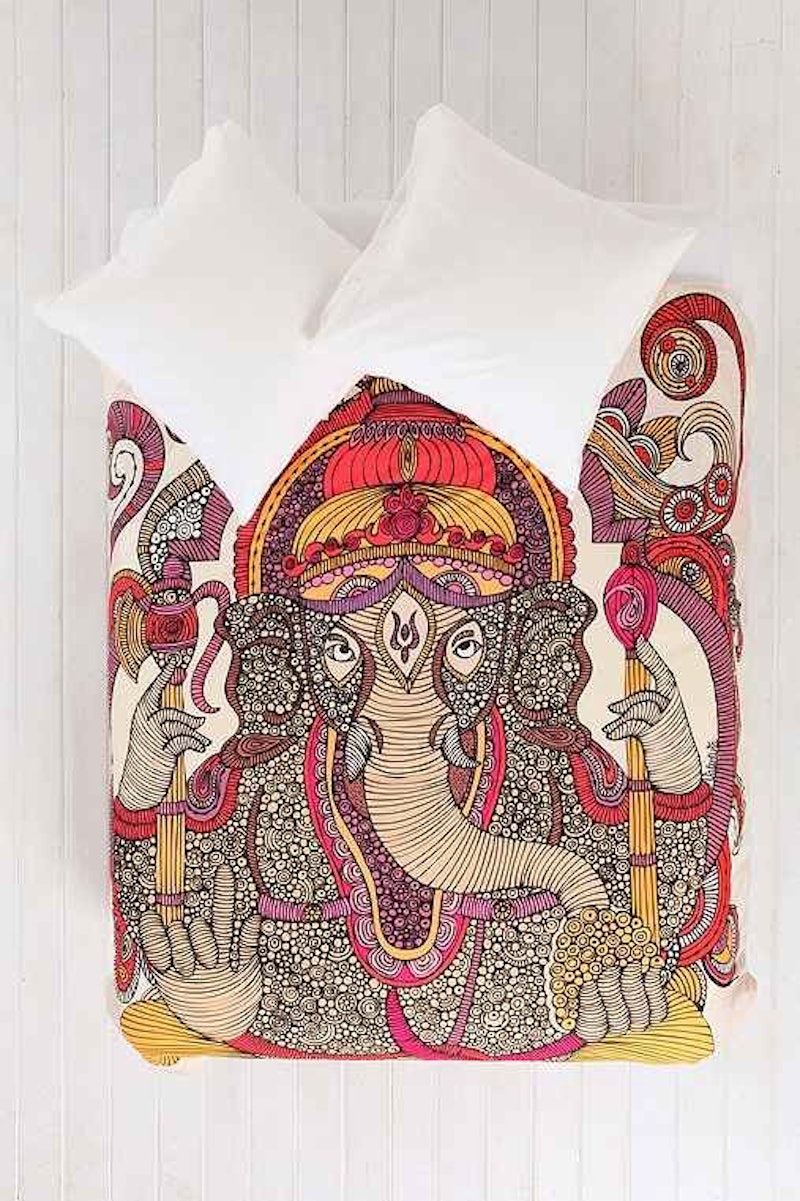 You may recall Urban Outfitters' Lord Ganesha sock controversy back in 2013 that rightfully pissed off the Hindu community, but the retailer must be suffering from short-term memory loss because they are now carrying a Lord Ganesha duvet cover. Surprise, surprise... the Hindu community is angry again. Urban Outfitters is the petulant teen who always gets caught when sneaking home drunk past curfew yet continues to try and get away with it every weekend anyway.

In a statement sent to Bustle this morning, Hindu statesmen Rajan Zed explained that Lord Ganesha is a figure "highly revered in Hinduism and was meant to be worshipped in temples or home shrines and not to be slept upon." By that logic, the duvet covers could be perceived as highly offensive to Hindus and really anyone with respect for other cultures. Zed who is President of Universal Society of Hinduism, is urging UO's president and CEO to issue an apology and to stop the sale of the duvet cover. Seems more than fair, no?

Since Hindu leaders weren't too pleased with the socks depicting Lord Ganesha, you'd think the buyers would've figured out that a $129.00-$169.00 duvet cover featuring an illustration of Lord Ganesha by Valentina Ramos wouldn't go over well either. You'd also think that the UO buyers would get the hint that cultural appropriate is not cool. I shudder to think of all the 20-somethings dying to get their hipster racism on by flaunting this duvet in the middle of their Bushwick loft decorated with votive candles.

The illustration by Ramos is pretty wonderful and was quite probably created with the best intentions, but slapping the artwork on a topper for people to sleep on is, well, a bit much. Maybe steer clear of the Hindu imagery from now on, huh Urban? You don't want to be grounded for the third week in a row, now do you?

More like this
Most Comfortable Underwear For Big Butts
By Audrey Williams
42 Black Owned Fashion & Beauty Brands To Support Today & Always
By Mekita Rivas, Shea Simmons, Kui Mwai and Dominique Norman
Myra Magdalen Is TikTok’s Queen Of Chaotic Maximalist Fashion
By Sophia Moore
11 Graduation Guest Outfit Ideas To Wear To Someone Else’s Ceremony
By Phoebe Avison and Claire Fox
Get Even More From Bustle — Sign Up For The Newsletter