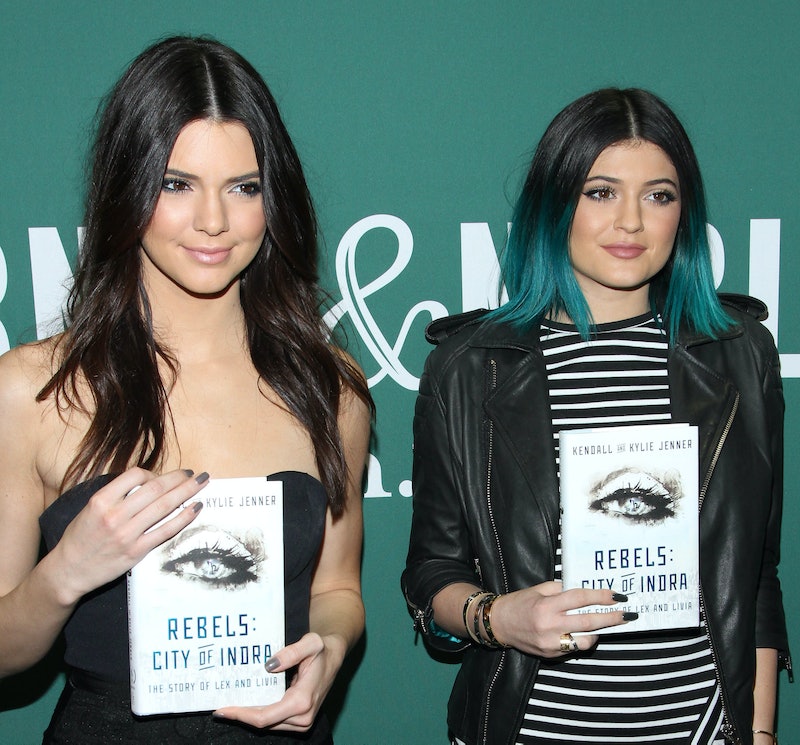 The reviews are in for "Kendall and Kylie Jenner's" young adult novel Rebels: City of Indra: The Story of Lex and Livia: The YA Novel With One Too Many Colons, and spoiler alert: They aren't good.

It's safe to say no one expected the Jenner sisters' debut book to be the next Great American Novel, but the overwhelmingly bad press has fallen onto the shoulders of not just Kim Kardashian's little half-sisters, but the book's ghostwriter Maya Sloan.

In a Los Angeles Times profile, Sloan discussed her work on Rebels and coping with the backlash she has experienced. According to the story, she allowed herself just one day to check out reviews of the novel. But it seems that one day may have been one day too many.

Sloan has not one, but two separate MFAs, she teaches beginners writing at NYU, and she's the co-author with another anonymous creator of the upcoming book based on the popular Tumblr Rich Kids of Instagram. It's not her first time ghostwriting, either. She wrote Redefining Diva in 2012, a memoir for Broadway star Sheryl Lee Ralph.

Sloan says she used Kendall and Kylie themselves as models for the teenage protagonists in Rebels, following them along to various events over the course of her writing. The Jenner sisters then allegedly marked up her drafts to make sure the voice was on point.

Still, it seems the online trolling is not only directed at Kendall and Kylie, but at Sloan's work and the author herself.

The reviews range from generous to clever to downright nasty. The much-esteemed Publishers Weekly stayed on the kinder side:

Details about the two worlds the girls inhabit are creative, though the plot that emerges after they meet is rather predictable. Even so, abundant action — including a hair-pulling fight, a high-speed chase on flying machines, and an attack by hideous beings known as "mutations" — provides momentum. Unresolved conflicts set the scene for the next installment.

Customer reviews on Amazon, where it has an average ranking of 1.7 out of 5 stars, and reader reviews on Goodreads, where it currently has 2.73 stars, were less than nice.

One reviewer, from the blog Writer of Wrongs, gave it a gif-tastic review:

Over at Amazon, one reviewer has started seeing signs about the novel:

Just finished the book and went to get some egg rolls. The fortune cookie they gave me said "The book you just read was terrible" and now my egg rolls taste like regret.

And then it starts to turn on Sloan herself:

The bigger fools, however, are the Jenner girls, who seemingly parted with their money on a ghostwriter from remedial composition class.

Clearly these two did not write the book because there are several three-syllable words. Sadly, their ghost writer is lousy, so that's ten bucks I'll never see again. Wish I could give this dog's breakfast zero stars.

It's as if someone distilled the stupidity of the entire Kardashian family, let it sit for a thousand years in a vat of sewage, then bottled it for us to consume in the form of this "collection" of "words."

The readers at Barnes & Noble got their shots in, too:

I really think that the ghost writer just slammed her head against the keyboard and came up with this crap.

Others were just plain sad for the trees:

I’m mentally holding a memorial service for the trees that perished because Kylie and Kendall decided to 'write” a book.'

I only want to read this so that I can have the satisfaction of saying that Kim's sex tape had a better plot and a more powerful climax.

Readers are absolutely welcome to their opinions — but do we have to take this out on Maya Sloan? Writers must write to make a living, particularly in this modern publishing world. And so the reviews decry that new, talented writers can't get a publishing deal but the Jenner sisters can despite never finishing school, they are missing the point about Sloan. She's one of these writers doing what she can for a book deal. She has to make a living, too.

And look into her past. Sloan published a novel with her name on it in 2010, called High Before Homeroom. Have you heard of it? Probably not. You likely haven't heard her name before she started being a prolific ghostwriter. That memoir of the Broadway star was read more than her personal book, and it was the book that even got her in the room to talk to the Jenner sisters about writing Rebels.

And Sloan gets this. She wants to write. Thus, she takes writing jobs. She said to the LA Times:

"I've learned to check my ego," Sloan said. "Ego will get you a teaching job in Iowa grading freshman comp papers, or a 9-to-5 editing promotional material where you want to slit your wrists. I'm writing for a living, and it's a gift to be a working writer."

She's currently working on a non-ghostwritten novel now. And maybe, just maybe, the press from all of her ghostwriting work has made that possible. The novel will be written sans co-author, about 1930s New York and burlesque dancers.

Let's not begrudge a working woman just trying to get by doing what she enjoys.