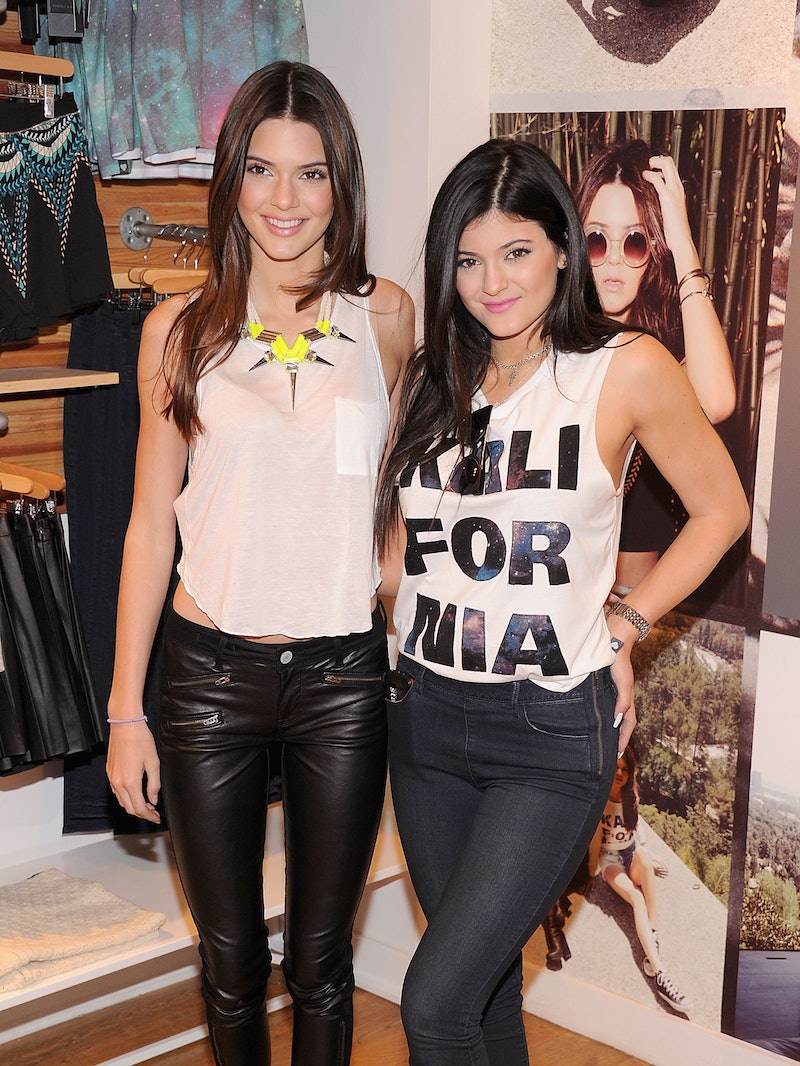 Keeping up with the Kardashian's network E! revealed last night the cover for Kendall and Kylie Jenner's forthcoming YA novel Rebels: City of Indra.

News first broke in the summer of 2012 of the sisters' plans to release their debut novel, but with the cover reveal, we all have to cope with it really, truly happening. Kendall and Kylie told E! that their story will feature two sisters, and it will have the dystopian, supernatural elements they enjoy from books like The Hunger Games, Twilight, and the Harry Potter series.

The cover reveal came on the heels of the announcement that the entrepreneurial girls are launching their own shoe and handbag line for Steve Madden. With the novel, the fashion line, and Kendall's rising modeling career, the sisters have been making a name for themselves outside of their famous Kardashian clan. Somebody should tell their future brother-in-law Kanye West about their chosen career path, because yesterday he claimed he was going to make the talented sisters into pop stars.

As for Rebels: City of Indra's cover, it definitely hits on the dystopian and supernatural notes YA fans have come to expect from these novels. In fact, book blog Stacked even featured eye-focused covers as a trend for 2014.

However, the watercolor detail on the eye is a neat touch. The coloring is also reminiscent of YA novels past, but let's face it: The only real issue here is that it has two subheds. Rebels: City of Indra: The Story of Lex and Livia?

Kendall and Kylie — or as I like to think of them, Brody's sisters — have been tight-lipped thus far about plot details, but the Amazon page for the YA novel gives a synopsis:

Kendall and Kylie Jenner ... present their debut novel — a thrilling dystopian story about two super-powered girls who embark on a journey together, not knowing they’re twins.

...In this fast-paced, dystopian thriller, Lex and Livia reluctantly team up to save Kane after discovering that they share a mysterious identical mark—not realizing that their biggest danger is in each other. You see, these two girls have a secret, a secret that even they do not know: they are sisters. Twins. And that is forbidden…

If Kendall and Kylie are taking from personal experience to write their story, here are three theories for plot point summaries in Rebels: City of Indra.

The twins were separated at birth by their handsome, heroic older brother, who wanted to save them from his evil stepmother, their mother, and from going down the path he was already on. His step-mother pit his step-sisters and himself already in the blinding spotlight, so they were unable to have a life behind closed doors or explore who they really wanted to be. Obsessed with attention and money, the family would corrupt the beautiful newborn twins.

So their brother kidnapped them, sending them off to separate families to escape their fate and find true happiness. But then they meet and discover they are twins, and that their birth mother is the land's new evil queen. She's on every netportal station and on every page of every digitally uploaded magazine — blinding the world from the true struggles its citizens are facing. The twins then embark on a journey of good versus evil to defeat the woman who gave them life.

The Amazon summary introduces prospective readers to Kane, but leave the rest up to our imaginations:

And then there’s Kane — Lex’s only friend, whom she would walk through fire for. And when she finds that Kane is in danger, she doesn’t hesitate to leave her post and blast her way to the top of Indra to save him.

Kane is a member of an elite group of young men who are tasked with providing the land with endless entertainment. The only hitch? The evil queen has cursed them with boyish good looks for life, so they can never grow old and must always entertain.

Every year, more and more rabid fans are born into the land, overwhelming Kane and his group with adoration — but the love and attention becomes suffocating as the fan group continues to expand, and the members are unable to leave the house for fear of their lives. Lex has been best friends with Kane since childhood, but recently they may be moving to more than just friends. As they're struggling to figure out their relationship, fans, like a zombie hoard, break into Kane's home and kidnap him. Now, with Kane in danger, Lex and Livia team up to get him back.

Amazon's summary states, "Lex lives down below, close to rock bottom." But how did she get there? Let's speculate:

Lex was rising in her artistic career, taking risks and gaining attention for her skill. But one day, she may have taken too much of a risk — particularly in her buttoned-up land, so opposed to anything risque. Her headline-making choice caused her to suffer in the eyes of her land's citizens, and she is shamed and banished to live down below. But along the way, with the help of her sister Livia, Lex learns about standing up for herself and her feminist ideals, even if the land she once loved still hasn't caught up yet.

But. You know. Pure speculation. Ahem.