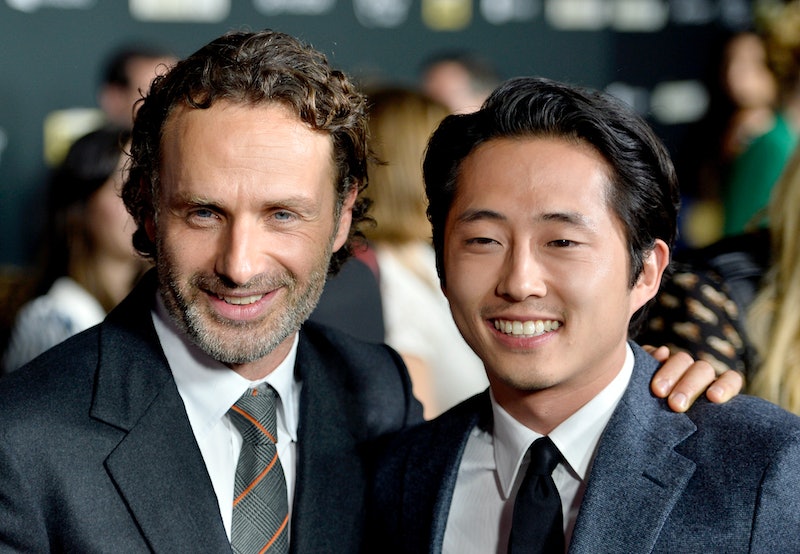 The Walking Dead doesn’t return to AMC until October, but in the meantime, we just can’t sit here, twiddle our thumbs, and wait for answers. While everyone else is out celebrating America this weekend, fans will be home watching the Dead, White and Blue Walking Dead marathon on AMC as we anxiously await the extended sneak peek trailer on July 6. We just need to know what happens in The Walking Dead Season 5, or at least get a little hint of what to expect.

Lucky for us, executive producer Robert Kirkman recently talked to Entertainment Weekly Radio and gave some information about the new season. Of course, none of it was very concrete, because Kirkman loves to torment fans of his hit series. Unlike Game of Thrones, The Walking Dead is a little less focused on following its source material, which in this case, is a comic series. Some characters who are already dead in the comics are still alive on the show (and vice versa), leaving everyone guessing what will happen next.

As an avid fan of the show, I am extremely worried about my favorite characters who are trapped in a train car right now. Okay, so I’m really just worried that Daryl Dixon (who happens to be the love of my life) won’t make it out alive. In the Entertainment Weekly interview Kirkman even said, “Oh, and Daryl dies,” followed by laughing. That’s a sick joke, Kirkman. I do not appreciate it and I’m sure the other millions of fans don't either.

With many twists and turns this season, Kirkman has also said there’s a lot more secrecy on set, to minimize spoilers getting out. However, some spoilers did make it. Here's everything we know so far about Season 5, including some supposed spoilers. So, if you don’t want to know anything about The Walking Dead's upcoming season, stop reading now.

THEY GET OUT OF THE TRAIN CAR

Right now, Rick and the gang are all locked in a train car in Terminus and we honestly have no clue what is going on. It was a bittersweet finale as our group finally finds each other again, but are taken captive by the people who run Terminus. How long will they be locked up in there though? Robert Kirkman had no problem spilling details about the imprisonment.

Hopefully they get out within the first episode, but we still have yet to confirm an exact timeline, though according to Spoil The Dead's fan forum, the escape happens in the season premiere.

THE PREMIERE WILL GIVE MANY THE ANSWERS

Kirkman promises that in the premiere episode we will have some major answers to our most burning questions. The premiere takes viewers into Terminus and explains who these people are, why they locked our favorite characters up, what’s actually happening in Terminus, and why everyone there is so important to The Walking Dead storyline.

In the comic book series, there are a group of cannibals called The Hunters and many fan theories claim that the people in Terminus are actually The Hunters. More pictures from set seem to be proving that theory true, since actor Seth Gilliam was cast as a mystery character and has been spotted on set in a priest costume. In The Walking Dead comics, Rick's group is with Father Gabriel when they encounter The Hunters. There is still no word about Gilliam’s character name, but it all sounds very suspicious.

The sneak peek at Season 5 has promised us the most intense season of the show yet. Star Andrew Lincoln said that this is the “most ambitious first episode we’ve ever attempted. It moves like no season premiere we shot before.” Forget the fact that they’ve already killed thousands of zombies (probably Atlanta’s entire population at this point), this season is said to be way more action-packed than ever before and the fastest-paced season thus far.

In an interview with the Hollywood Reporter, Kirkman responded to some rumors that Glenn wouldn’t make it past this season. “I absolutely love it," he said. "It means people care and people are paying attention. So keep those rumors flying!” Not helpful at all, Kirkman, so thanks for that!

Kirkman was also asked if any of the main characters would die this season. His response is neither reassuring nor immediately terrifying, so that's good, I guess?

It's always highly likely, though I wouldn't say that it's any more likely than it ever is, but it is always extremely likely. We did pull back on the reins a little bit at the end of season four. We're definitely going to hit the ground running for season five and we really don't let up very quickly at all.

There Will Be a Hospital Involved

Spoiling The Dead Fans have been stalking the sets around Atlanta for insight into the newest season and might have hit the jackpot with a notice about traffic and road closures for filming at a hospital. Now, there are rumors that some serious injuries will occur in the escape from Terminus, and in that case, I'm pretty sure a hospital would be more helpful than a prison.

Hopefully, the extended sneak peek revealed on The Talking Dead this Sunday will give us more clues about the new locations and characters we'll see this season. If we're really lucky, Kirkman will give us a little more information as we get closer to the premiere date. The longer fans have to wait for information, the crazier we'll get.