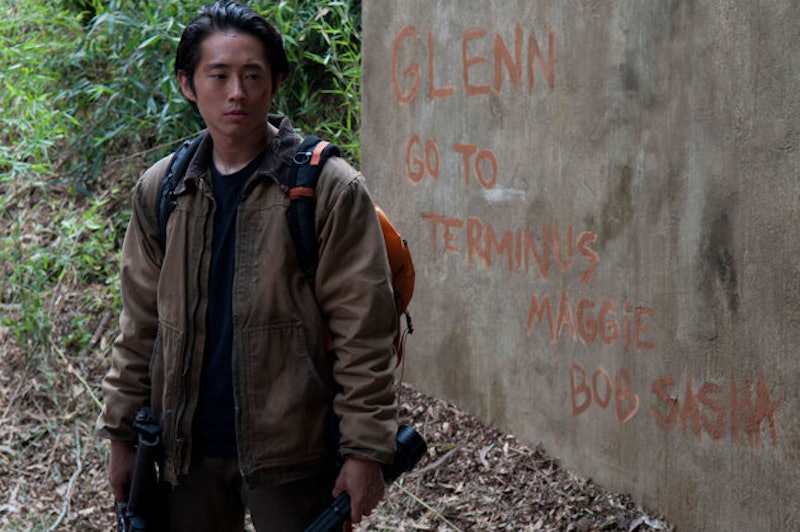 We're still at least four months away from the Season 5 premiere of The Walking Dead and yet there's already cause to be concerned for one of the series' most beloved characters. Don't worry, it's not Daryl, but another character that would be just as upsetting to see killed off—Glenn. It seems that his reunion with Maggie may be short-lived, as there are rumors that Glenn will die early in The Walking Dead 's fifth season. Fan site The Spoiling Dead has reported the rumors, however there is little evidence of their accuracy.

On their Facebook page, The Spoiling Dead claimed that multiple sources told them Glenn's death had been filmed already. Their other "proof" includes a tweet from Alanna Masterson, who plays Tara on the show, that said "When someone great is gone." They also reported that the actor who plays Glenn, Steven Yeun, had an emotional goodbye after filming one night.

Adding fuel to the fire:Steven reportedly left set at 2 or right around then. Alanna's tweet was at 1:28. It's said that Steven was hugging production members and shaking everyone's hand while leaving.

So was Glenn killed off or was Yeun just being really friendly around the same time that Masterson lost someone close to her? It's hard to know for sure, but there is more evidence to examine. First is the fact that no one died in the Season 4 finale, a surprising twist that though reassuring at the time, means that all of the characters are in jeopardy as soon as The Walking Dead returns. Terminus is obviously a very messed up, dangerous place and for everyone to survive the finale just means that the show will shock viewers with some early deaths in Season 5.

Glenn could be one of them. The character was recently killed off in the comic series and though the group's circumstances were different, there have been many disparities between the comics and TV series since the latter began. Still, one important factor in Glenn's comic death could still be added to the show. Glenn dies while trying to reach a place called the Hilltop Colony, that he believes to be safer than where the group had previously been staying, the Alexandria safe-zone. Finding the safest possible place to live is very important to Glenn at this point because Maggie is pregnant.

Currently on the TV series, the group is at Terminus, not the Hilltop Colony or Alexandria. But that doesn't mean Glenn is safe. He and Maggie just had an emotional reunion and on The Walking Dead, characters are rarely allowed to stay happy for long.

It's not time to start mourning Glenn quite yet. But if the fifth season begins and we find out Maggie is pregnant, break out the tissues.