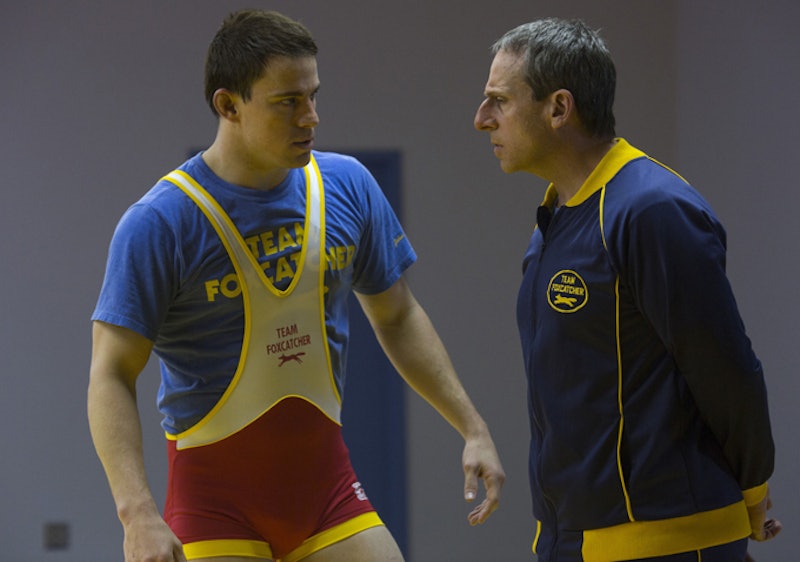 When the first Foxcatcher trailer was released back in May, all anyone could focus on was Steve Carell — in particular, Steve Carell's nose. Thanks to the wonders of makeup, the actor was practically unrecognizable as John du Pont, a paranoid schizophrenic wrestling coach, and according to the film's reception at Cannes, Carell's physical transformation was only one element of a career-changing performance. Yet in the new trailer for Foxcatcher , released on Wednesday, Carell's merely a background figure; instead, it's Channing Tatum's Mark Schultz, an Olympic wrestling champion, who's placed in the spotlight.

"I want to be the best in the world," Tatum's Schultz says at the trailer's start, as clips of his victories play in the background. With du Pont's encouragement, the wrestling star begins a journey to win medal after medal, despite some very unhealthy-looking behavior from both athlete and coach. Mark's brother, Dave Schultz (a scruffy, balding Mark Ruffalo) seems less supportive of his sibling's goal— likely because he senses something off about Du Pont, the man would go on to murder him in cold blood shortly after just a few years after they met.

It's a spooky, compelling trailer, a short but effective tease for a film that's sure to be a major awards contender after its release this November, thanks to its all-star cast and Oscar-loved director, Bennett Miller (Moneyball). The only flaw is both trailers' total lack of women —Vanessa Redgrave and Sienna Miller have supporting roles in the film, but you wouldn't know it by the absense of face-time for either actress in the clips released so far. Otherwise, though, the film has our strong support, not to mention our excitement. Sure, movies can fall short of their trailers, but we'd be shocked if Foxcatcher didn't turn out to be one of the best dramas of 2014.

Check out the new trailer below: