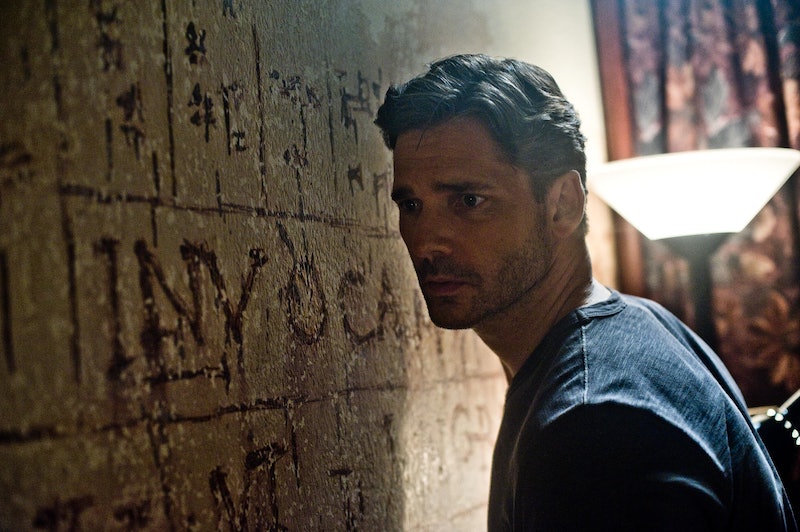 It's summer, which means that it's time for another "based on a true story" horror flick to hit theaters. This summer, it's the Jerry Bruckheimer produced Deliver Us From Evil , which, according to the film's posters, is based on the (allegedly) true stories from NYPD officer Ralph Sarchie's memoir Beware the Night . Eric Bana portrays Sarchie in this horror film, the officer who must rethink his lack of faith when true evil begins seeping into his life. Forget taking down armed suspects — the real terror in Sarchie's job comes when he's forced to tackle the demons who have possessed the people of New York City.

So what is the real story behind Deliver Us From Evil? According to USA Today, several stories from Sarchie's past have been adapted to create Deliver Us From Evil . Sarchie, a self-described "demonologist," has assisted on more than 25 exorcisms and has exorcised hundreds of houses from their alleged demons. According to screenwriter and director Scott Derrickson, "the movie is inspired by [Sarchie's] memoirs, which centerd on 10 cases." Derrickson admits that the film took some "artistic license" with the material, but that the film tried to stay as true as possible to Sarchie's character, which Derrickson believes is captured nearly perfectly by Bana.

As for the true scares in the film, well, it's clear that these artistic liberties might be more exaggerated than the film wants its audience to believe. Reviewers have cited one particularly horrifying scene in the film that shows a woman throwing her baby into a lion's den. (Shudder.) I can't find any evidence that this event ever happened — thank God. It appears that the film is more interested in using Sarchie's character as the crux of the "true" part of the story, but has chosen more sensational stories for the actual plot.

I, for one, am okay with that — the world's already a pretty scary place, and I'd rather not be confronted with real-life terrors in my horror films, thank you very much.