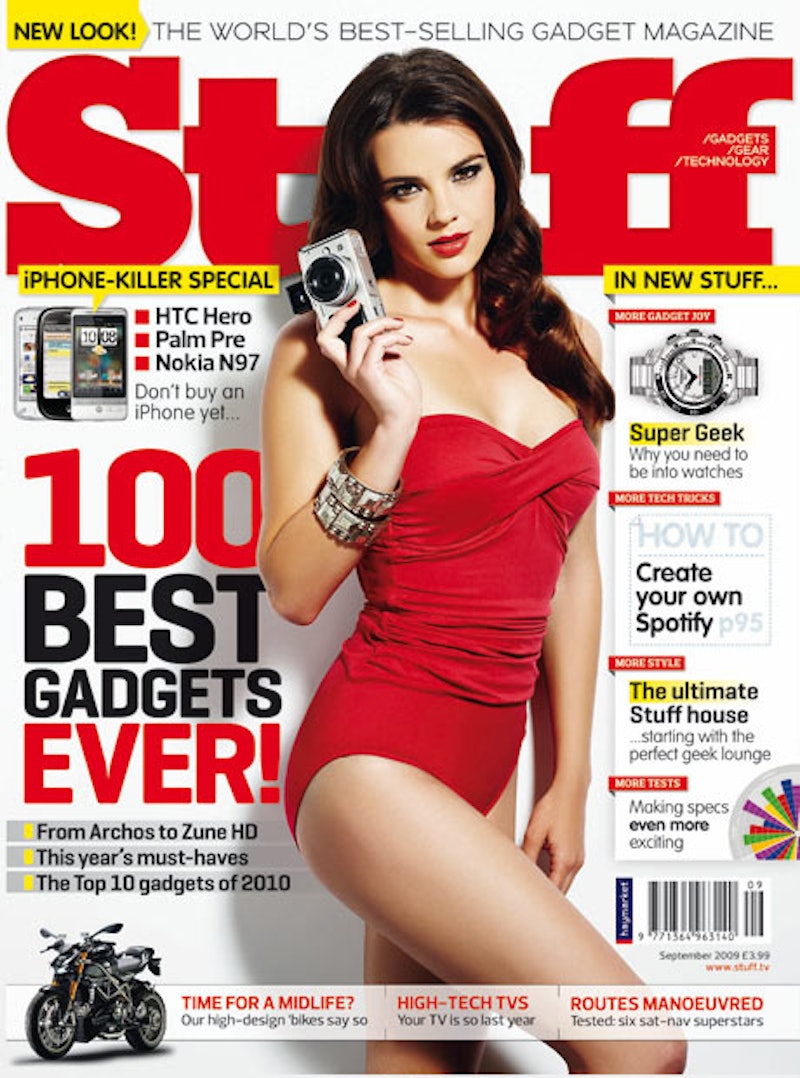 We've heard it time and time again: "sex sells." This is the main justification for throwing scantily clad women on the covers of every magazine geared toward men and women from Maxim to Shape. Men see a woman they want, women see a woman they want to be, magazines fly off the stands. Except maybe not so much. Tech magazine Stuff has dropped sexy cover models after research showed they actually alienate the customer. We can't exactly give Stuff the "Feminist of the Year" award, but we can celebrate this teensy loss for sexism.

Stuff has used barely-clothed cover models posing with gadgets since the magazine launched in 1996. According to The Guardian, Stuff has a monthly circulation of over 77,000, a readership that has shifted over the past twenty years to be 40% female. EIC Will Findlater told The Guardian:

Stuff was launched in 1996 at the peak of the lad mag era. Nearly 20 years on – and with tech now an indispensable part of everyday life – our readership has changed. The covers used to help our position on the newsstand but our research tells us this is no longer the case.

The magazine conducted focus group research and ran sales tests in April, May, and June with "20% of the print run devoted to “non-girl” covers in four regions of the UK," according to The Guardian. Sales of the "non-girl" covers were up 10 percent in April and also saw increases in May and June. Welp. Perhaps those provocative bikini shots and come-hither stares aren't the key to magazine success after all.

But the real lesson here? Men aren't the only people who are into tech and gadgets. Hm, perhaps the industry shouldn't be such a boy's club... what a novel concept! Here I thought girls only liked lipstick and high heels. Stuff is the U.K.'s biggest-selling tech magazine, so hopefully the trend will trickle down toward the rest of the industry from here. Stuff publishing director Rachael Prasher told The Guardian:

While the decision to drop the cover girls from Stuff is based on what our audience have told us through focus groups and cover trials, there is no question that it feels like the right decision to make. At the industry level, we see this as a big step forward for men’s lifestyle magazines.

Ding dong, the sexist men's magazine stereotype is dead! Hopefully. Okay, probably not yet. But we're getting closer.