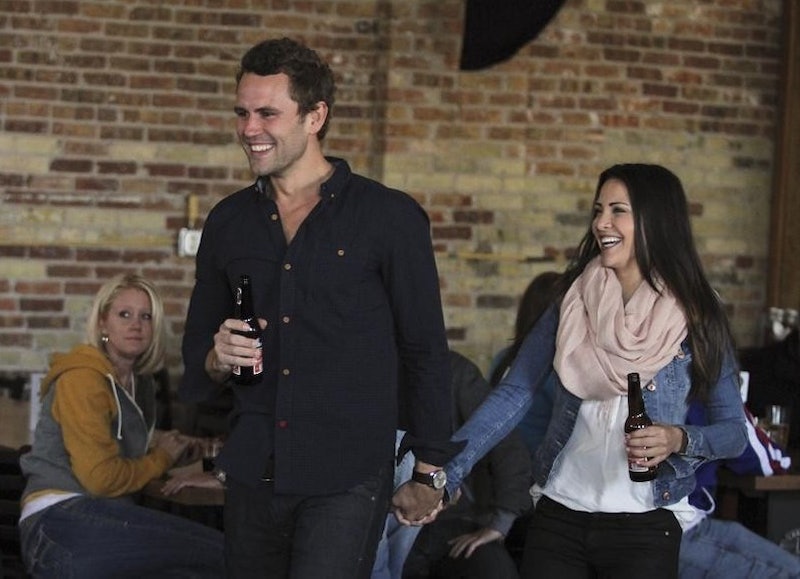 Oh, Nick. After last week's episode of the Bachelorette , it seemed Nick Viall got a bad rap for no reason this season. And maybe — just maybe — the guys really were so jealous or intimidated by his relationship with Andi that they misread his verbal and physical cues for the worst. Yeah, I’m not so sure that’s what happened either. Lucky for viewers of The Bachelorette, we get to peek into Nick Viall’s home life this week and learn a little bit about where he came from (Milwaukee, Wisconsin, as it were) and his upbringing.

There is no doubt that the spark is there between Nick and Andi. Just last week the two of them sneaked out on a (kind of unfair) one-on-one date and makeout session in Brussels, then on top of that, Nick got the group date turned one-on-one date where he was able to open up and told Andi he was falling in love with her. And as always, that put a huge smile on Andi’s face.

So what does it mean for Andi and Nick if Andi goes into this hometown thinking Nick is one way, when the viewers and the other guys see him as someone who feels extremely entitled? Will Andi not be asking the tough questions, simply because she doesn’t know they need to be asked? She'd better at least get to the bottom of these three questions by the time she flies away from Nick's family:

1. Why hasn't he gotten along with the other guys?

This is going to be a tough question to ask, because as far as I am concerned, Andi sees Nick as someone who can do no wrong. Basically, she doesn't know it needs to be asked. But if by some miracle Andi does ask his parents why Nick wasn't the best team player (at least she knows he hates group dates), maybe we will get a little insight into why he wasn't the best guy's guy this season.

2. Is he ready for a serious relationship?

The remaining men have called Nick a salesman, which, by trade, is what he is, but something tells me from last week's confrontation they don't mean it that way. It is very obvious that Andi is so ready for this season to culminate in a proposal so she can start her life with one of these men, but is Nick ready for that, too? Hopefully, if Andi asks his family this, those who know the 33-year-old well can answer if he is really just selling the "get married, have kids" thing that came up last week, or if he genuinely means it.

3. What does his family want from Nick's future wife?

I wouldn't usually think it mattered, but in Nick's case, family is huge. No, seriously. Huge. The guy has a large family — he is one of eleven children. With such a sizeable family, Andi is going to have to mesh well with a lot of different personalities. So, what does Nick's family think the qualities of his future wife should be? It should be interesting to see if they all are on the same page, and if Andi fits into the role (and whether or not she can remember all of their names).