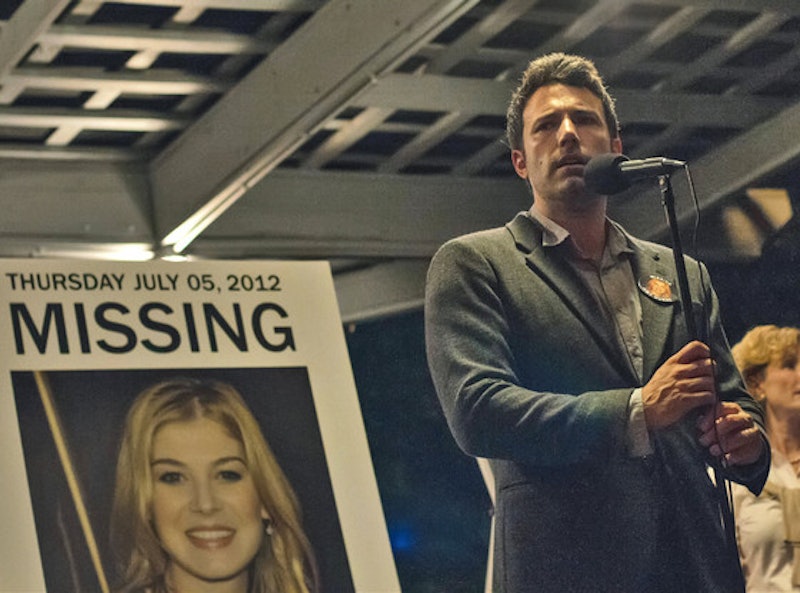 We knew it was coming, but that doesn't mean we were prepared; after the release on Sunday of several new, eerie posters that teased an even more disturbing trailer to come, the newest Gone Girl teaser has arrived — and it's even darker than we imagined. Featuring plenty of details from the book, a morose Ben Affleck, and the repeated, spooky refrain of "this man may kill me," the latest look into the movie is the most creepily compelling so far.

The trailer opens with Nick Dunne (Affleck) being grilled on TV about the disappearance of his wife, Amy (Rosamund Pike). "Did you kill your wife, Nick?" the reporter asks, and the look on his face is impossible to read — exactly what makes Gone Girl, both the book and, likely, the film, so interesting. From there, the trailer gets even darker; there's shots of a crime scene, a serious (and possibly murderous) Neil Patrick Harris, snapshots of Amy's revealing, fearful diary entries, and the pleas of her parents to find the truth about their daughter's mysterious disappearance. What's most disturbing, though, is the juxtaposition of Nick's statements — "I hit her? Absolutely not!" — with footage of the couple violently pushing each other around. It begs the question that haunts all of Gone Girl: who, if anyone, should we believe?

Those unfamiliar with Gillian Flynn's novel should be relieved by the new clip, which shares much more information about the material's complicated plot than the first one did. Although the majority of Gone Girl is too secretive to be shown in any trailer, non-book readers will be able to go into the movie with at least some working knowledge of what to expect: the suspicion of many that Nick Dunne murdered his wife, and the slow reveal that there may be much, much more to the story than that.