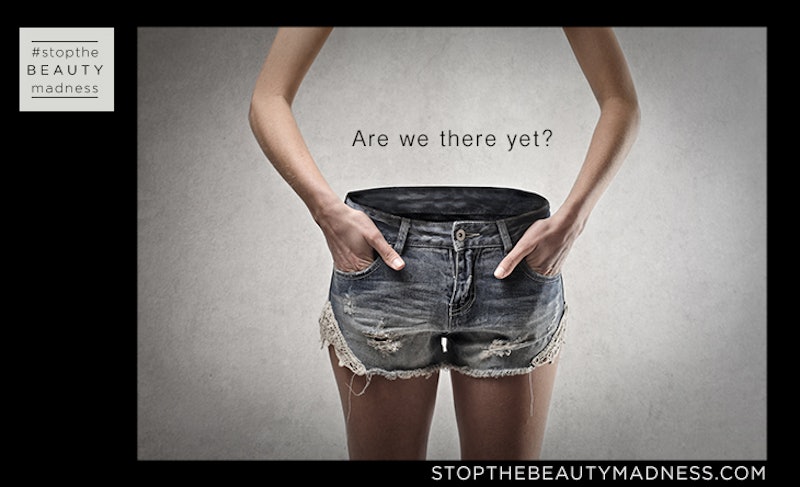 That our culture has an obsession with beauty is no surprise. It's been written about and discussed for decades. We are taught about it in schools — encouraged to somehow cultivate a good self-esteem despite the facts. But it's only in recent years that changes have started to surface that actually promote body positivity, be it through plus-size blogging or sites like The Body Confidence Revolution or women like Bethany Townsend, Crohn's Disease model.

But there's another woman trying to make a difference. One you might not have heard about before. She's a teacher, an internationally-published author and a leader in social thought: Robin Rice. Rice is the creator of Be Who You Are Productions, Inc. — an organization dedicated to bringing about social change — and Monday she launched a new campaign: #StopTheBeautyMadness.

Unlike a lot of blogs and sites already in existence, Stop the Beauty Madness isn't geared at a target audience. It's not exclusively for plus-size women. It's not just for 20-somethings trying to figure out their lives post-grad. This campaign is basically for all women. For every woman who has ever felt judged, mocked, over-sexualized or preyed upon for being different. Through a series of 25 gritty, raw advertisements that bring to the forefront negative perceptions on sexuality, weight, age, race and mental illness, the campaign is combating some of the most honest yet brutal realities of 21st century living. These ads are unapologetic in their boldness and bluntness, and so it's no surprise that Stop the Beauty Madness is already being received by over one million women worldwide via social media.

Founder Robin Rice says that the campaign is all about:

"Calling out the ugly truths hidden in our culture and our own minds. It's about strong words that reveal the ideas that need to be seen for what they are. It is not always pretty to see what is hidden deep in our psyche (or even just slightly under the surface), but it is important to see it clearly so that we may call it out and change it."

When you look at the ads the campaign is putting out there, be it the fat girl in school who is told she'd be better off dead, or the intelligent, and stunning, young African American woman who has all the talent in the world, but not the "right" skin color, there is no denying that these aren't exaggerations or skewed opinions. These are truths. They're the truths we still live with on a daily basis. And they're the things in most need of change.

On top of the ad campaign, Stop the Beauty Madness is also providing a 10-week audio series in which FrontLine Voices inform and encourage their listeners to question their relationships with body image, beauty standards and the way these things manifest themselves in our culture. These "voices" include some undoubtedly inspirational gals, from plus-size supermodel Emme to the pioneering activist Jean Kilbourne to 16-year-old Valerie Weisler (Nickelodeon Halo Effect Award finalist), and over a dozen more. There will also be a Facebook page dedicated to women who want to share their "as-is" selfies, where they celebrate their natural beauty and uniqueness. This is sort of like a "no-makeup-selfie" Part 2, but aimed specifically at challenging mainstream beauty ideals.

It's yet to be seen how far this campaign will actually go; how many people will feel touched and encouraged to change the way they look at themselves and the way they look at others. But the hashtag #StopTheBeautyMadness has been leaked, and one can only hope people start to take notice. At the end of the day, it's going to take a lot of time, a lot of people and a lot of work to truly combat the way humans treat other humans. But it's campaigns like these that make change seem feasible. And not just feasible, but within our reach.