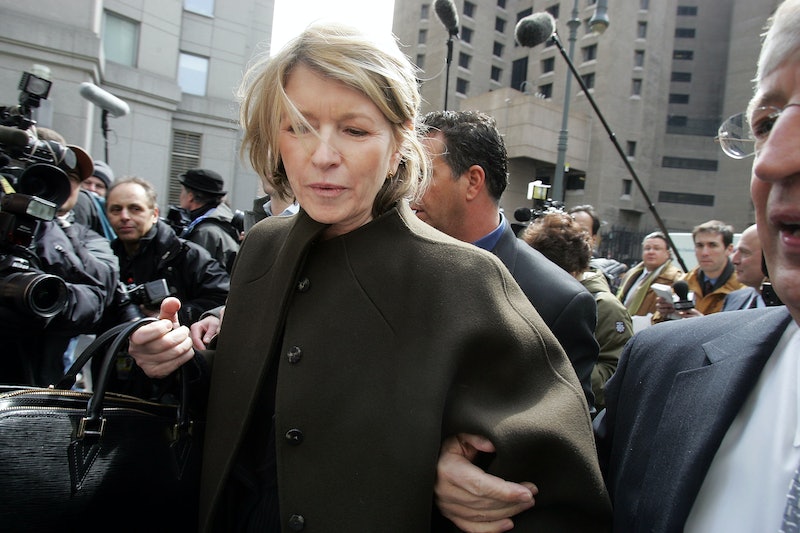 According to a new study by Pennsylvania State University, this is par for the course: Women face the same gender-related barriers to leadership in the illegal world, even when it comes to the least violent of white collar crimes. Sociologist Darrell J. Steffensmeier and his research team call it a "glass ceiling" of the same subtle sexist composition women face across the country:

"When women were involved, they had more minor roles and made less profit than their male co-conspirators...Paralleling gendered labor market segmentation processes that limit and shape women’s entry into economic roles, sex segregation in corporate criminality is pervasive, suggesting only subtle shifts in gender socialization and women’s opportunities for significant white-collar crimes."

The report explains that when women's names do emerge at the higher-levels of corporate criminal networks, they are usually tied to a close personal relationship with a main male co-conspirator (think: Enron's married duo Lea and Andrew Fastow), or as a gateway "front" playing a coordinating role (think: cartel coordinator Alex Vause on Orange is the New Black).

But, researchers admit, that's not to say there are no exceptions. We here at Bustle were curious about these, well, exceptional female criminals. Read on to meet some of the most prominent female criminal masterminds.

So James "Whitey" Bulger may have masterminded 19 murders, laundered money, dealt weapons, and maybe even seduced girls young enough to be his granddaughters — but the Boston gangster awaiting the verdict can only hope to reach the legendary status of Kate "Ma" Barker, the alleged brains behind a Depression-era network of mobsters (otherwise known as her four sons and their friends). The boys of the Barker-Karpis gang terrorized the Midwest with burglaries and shootouts from the 1915 through the 1935, cycling in and out of prison as their dear "Ma" supposedly maneuvered behind the scenes.

Beyond their shared penchant for mid-name quotation marks and elevated status on the FBI's Most Wanted List, Bulger and Barker may also meet the same fate: Capture. Though the extent of her involvement is a matter of controversy, one fact is true: She died in a Florida shootout with an FBI agent in 1935.

Perhaps you've been hearing about Fabrice Tourre, the Goldman Sachs banker found liable for those mortgage frauds that wreaked havoc on the U.S. economy.

Well, the midlevel Tourre has nothing on ex-CEO of Network Technologies Group Michele Tobin, who has the dubious distinction of being the only woman in the government's Corporate Fraud Task Force's database named as "ringleader" of a conspiracy.

Tobin sat at the head of the early 2000s-scandal that brought down her Baltimore-based company, in which they were convicted of falsifying records, defrauding banks, and defrauding two investment companies. She'll continue serving her nine-year prison sentence until sometime late this year.

Bradley Manning's sort-of conviction under the Espionage Act earns him a place in a long line of international spies, but his story has neither the charm nor the genius of World War II era shop-owner Velvalee Dickinson's.

The FBI's interest in the widowed Dickinson started in 1942, when censors intercepted a suspicious-sounding letter about dolls. Yes, dolls: Dickinson owned a doll shop, from which she conveyed secret WWII defense information to enemies in Japan.

In other words, a letter reading:

She spent seven years in jail prior to conditional release in 1951.

Ariel Castro has been sentenced to a millennium in prison for capturing, sexually abusing, and holding three Ohio women hostage. Had attorneys had a chance to prosecute the 17th century Slovkian Countess Elizabeth Báthory de Ecsed for her "sick" crimes, they may have tacked on an extra thousand years or so: the "Blood Countess" earns the title of most prolific woman serial abductor, sexual abuser, and, yes, serial killer of all time.

Elizabeth tortured young girls for pleasure — some witnesses claimed she captured over 650 in all — though she was only charged on 80 counts. She would hold women in cages and enact long torture sessions to extract as much blood as possible from her victims. Legend has it that she would drink and bathe in this blood from young virgin girls to keep herself from aging, though none of the many witnesses testifying against her could claim to have seen it for sure.

Unlike Castro, she got off with home imprisonment until her death in 1614.

San Diego Mayor's Bob Filner faces some pretty accusations charges of sexual assault, raising questions about his fitness to hold office. Wannabe mayor Anthony Weiner has had a lot of explaining to do, following leaked sexts and adultery, which, well, one could expect to cost him the race.

But, the march of history reminds us, politicians have recovered from worse: low-caste Indian woman Phoolan Devi joined a gang of bandits in 1979, had the gang leader killed, started sleeping with a man who was (cough) not her husband, killed her actual husband, and left a note warning older men not to marry young girls. A little while later, she stood at the forefront of the 1981 "Behmai Massacre," in which 22 peopled died as revenge for gang rapes and beatings. Though the incident provoked country-wide outrage, she began to gain notoriety as a Robin Hood-esque figure, known as the "Bandit Queen."

In poor health and tiring of a drawn-out (wo)manhunt, she surrendered herself to authorities in 1983. She served 11 years in prison awaiting trial. She was released on parole in 1994.

In 1996, as one of the best known women in India, she won election to Parliament. Twice.

Not that we endorse murder, but talk about breaking glass ceilings.

More like this
How To Support Gun Control Reform Right Now
By Morgan Brinlee and Carolyn Steber
The Church Of Scotland Votes To Allow Same-Sex Marriages
By Sam Ramsden
How The City Healed Five Years On From The Manchester Arena Attack
By Ella Glover
What Does Michael Peterson’s Family Think Of 'The Staircase'?
By Arya Roshanian
Get Even More From Bustle — Sign Up For The Newsletter