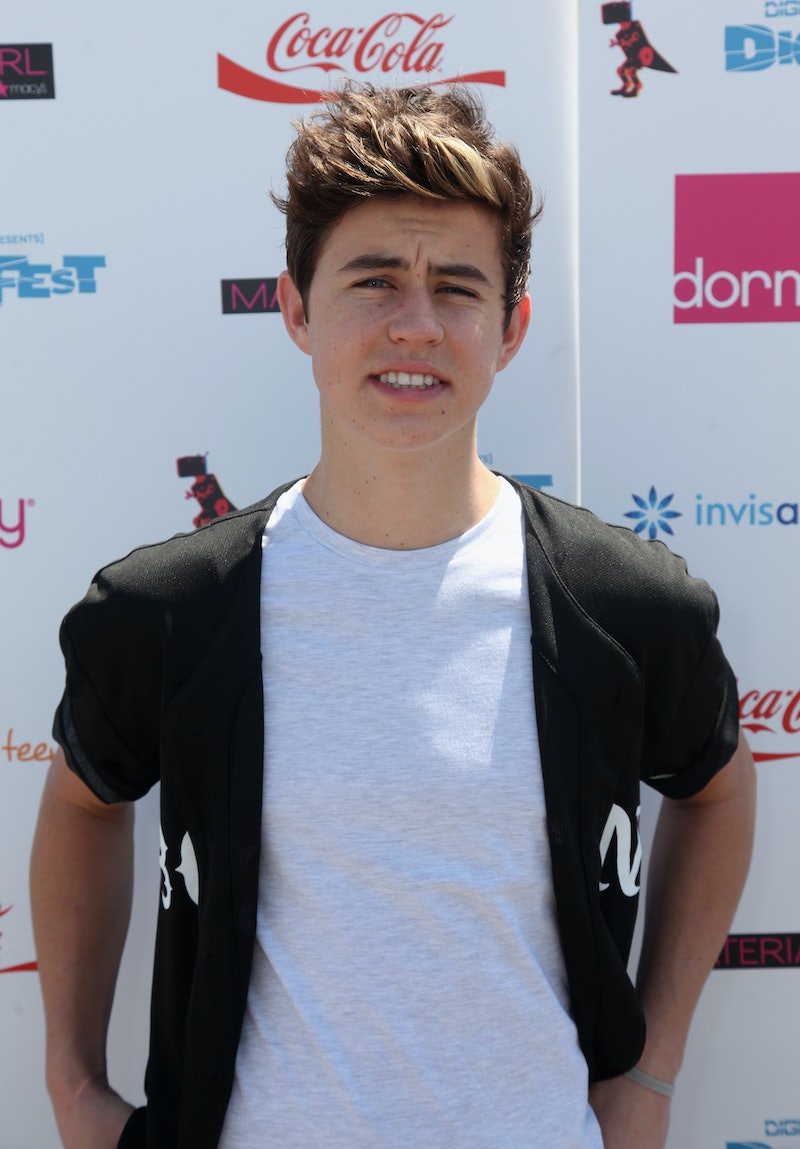 The dust had barely settled from Vine star Nash Grier's recent sexist video scandal when another controversy developed for the 16-year-old. In a video posted in April, Grier yelled the word f*g after showing part of a commercial for an HIV test. As reported by Mashable, Grier quickly took down the video, but it was reposted by another Vine account and is now getting some attention thanks to fellow Internet celebrity Tyler Oakley tweeting the video, along with a message about how dangerous it is. Grier apologized for the video on Sunday, but his apology didn't exactly help.

In his condemnatory tweet, Oakley said, "Promoting a false stereotype that HIV only affects gays to his millions of teen fans is extremely dangerous." Grier responded on Twitter less than an hour later, using a photo to show the apology that was too long for an actual tweet.

I apologize for anything negative I've said towards gays and for that matter anyone. I was young, ignorant, stupid, and in a bad place. I've moved on and learned from my mistakes and I am so truly sorry to anyone I have offended. I have nothing against anyone or anything that promotes equality. Sorry again

Grier had also come under fire for tweets that were against gay rights in the past, which is probably why he included that final complete sentence about equality. By including that line and apologizing in general, Grier probably thinks he's solved the problem, but unlike him, there are likely many out there who cannot move on — especially because his apology is lacking.

Using a homophobic slur in itself is a problem, especially for someone with an audience of 8.7 million, many of whom are teens, as Oakley pointed out. Oakley also tweeted, "Call me and people like me, 'fag' all you want, but spreading false information about deadly diseases is next level." By using the slur in reference to HIV, Grier took it a step further, perpetuating a very harmful stereotype and misinforming his young audience. There's no explanation that could justify Grier's actions, but his apology doesn't even come close.

Grier says he was "young, ignorant, stupid, and in a bad place" when he made the above video, and while it's certainly possible to be in a bad place briefly, the other three are things likely haven't changed much in the three months since the video was posted to Vine. Grier hasn't gotten much older in that time, and it's doubtful he's become any smarter or less ignorant. Addressing the LGBT community as "gays" wasn't the best way to begin an apology, and by being so brief and not bothering to finish his last sentence, Grier showed that he didn't put much effort into it.

It's also telling that he decided not to address anything remotely specific about what happened, or try to make up for his video's implications by better informing his fans. So far, Vine, the platform that gave Grier his fame, hasn't addressed the situation and there has been no word on whether it will affect his movie deal with Cameron Dallas, another Vine celebrity.

There should be consequences for Grier's actions, besides losing some followers. Though it's doubtful even that will happen, as Grier's apology was retweeted over 19,000 times and favorited over 53,000 times in just two days. Let's hope that Grier does the responsible thing and follows up that brief apology with a much longer statement that shows he truly understands why his actions were wrong.

With 8.7 million followers, Grier is no longer just a random kid making funny videos. His actions have serious implications and he needs to understand the harm that videos like these can cause. Maybe Oakley should give him a lesson in how to use online fame for good.

More like this
Andy Cohen Apologized To Larsa Pippen After A 'RHOM' Season 5 Reunion Dust-Up
By Brad Witter
Helena Bonham Carter Doesn't Think 'The Crown' “Should Carry On"
By Sam Ramsden
You’ve Got 'Love Island’s Farmer Will All Wrong
By Jack Orenstein
'Brookside' Is Coming Back & Soap Opera Fans Are Going Wild
By Sam Ramsden
Get Even More From Bustle — Sign Up For The Newsletter
From hair trends to relationship advice, our daily newsletter has everything you need to sound like a person who’s on TikTok, even if you aren’t.