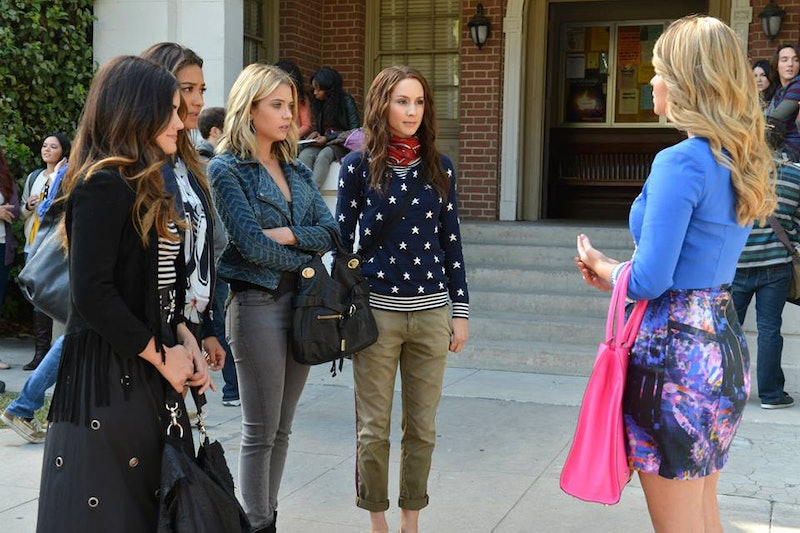 Okay, who poked the beast? After an extremely brief period of rest, PLL fans got confirmation that Shana wasn't "A" and that the real "A" is still at large and really pissed off. Not that we believed for a second that Shana was the ultimate "A" mastermind, but we tried to humor Ezra a little bit. On Tuesday's Pretty Little Liars 100th episode, "A" blew up Toby's house — so, clearly, whoever "A" is is so over mourning Shana and ready to raise hell. Literally — did you see those flames?

"A" hasn't gone this big in quite awhile on Pretty Little Liars — shooting Ezra was shocking, but doubtful that "A" went for it themselves. We know there were plenty of armed minions running around NYC that night, after all. On Tuesday night's "Miss Me x 100," however, this "A" game took and explosive proportion change — whoever's in that black hoodie is not happy that Alison's back and people are going to pay. So, they blew up Toby's house in a huge explosion, the likes of which fans have never seen on PLL before, unless you count the time "A" sent a car careening into Emily's living room. But has "A" gone too big this time?

Somehow, even though this still-masked-four-seasons-later cyberbully has locked Aria in a coffin with a dead guy, almost sawed Emily in half and tried to kill her with carbon monoxide, and wants Ali's blood on their hands, blowing up a house seems extreme. I know what you're thinking — nothing "A" does should surprise us or seem "too big" for their cause — but this was quite the statement to make after laying low for a few weeks.

And, with this, "A" knocked off yet another suspect and minion — Jenna. If she were running with the hoodie-crowd, why would they blow up her house? Unless that's what she'd conspired with Mona and Emily's new friend Sydney to do mid-episode. For "A," whose moves are always so calculated and tricky, this just seemed sloppy and as if they'd run out of ways to terrify the liars. Is "A" feeling the heat (pun intended) and felt the need to go Transformers-level big to distract everyone? Either way, this seemed like an unnecessary amateur's move in "A"s game that usually stays on the side of a silent-but-deadly hunter waiting to kill.

Are you even starting to bore yourself, "A?" Watch Toby's house burn and explode BTS here: