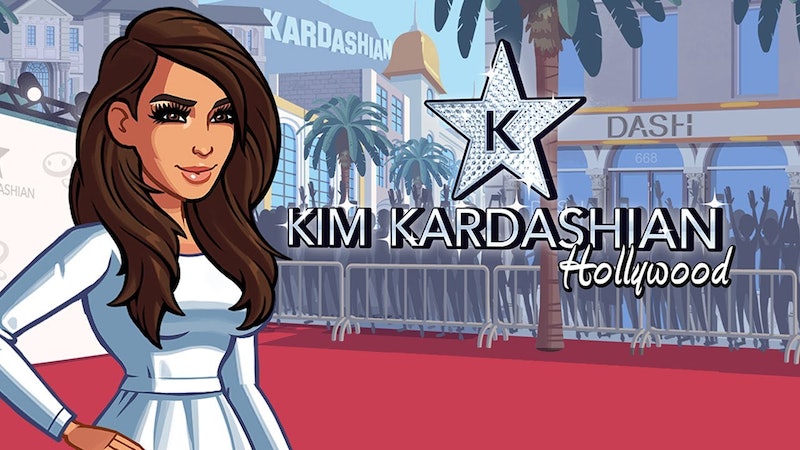 Kim Kardashian wants me to do a nude photo shoot. No, not in real life — in her video game, Kim Kardashian: Hollywood. If you have managed to stay away from this app, I salute you for being able to keep your dignity. For I, clearly, have not. I'm not quite sure what it is about it, but Kim Kardashian: Hollywood is addicting. I'm not a gamer, and I own only about three iPhone games. (And one of them is Angry Birds, which I downloaded long after everyone else in an attempt to understand what the fuss was about.) So I was surprised that I enjoyed Kardashian's game as much as I did. Was it the fact that there was little skill involved with playing it? Was it the fact that I could play the game — which involves simply clicking things and earning points and cash — while watching television, doing chores, or anything else that requires only half of my attention? Likely.

But there's more about Kim Kardashian: Hollywood to enjoy than just its brainlessness. I've been eager to tell friends just how progressive it is. Yes! Progressive! During the dating portion of the game, I had the option of choosing a girlfriend instead of a boyfriend. "Look at Kim, she's so forward-thinking," I said as I chose between a sporty or an artistic girlfriend (both of whom looked exactly the same, by the way, but, hey, it's a start). But then, my praise for Kardashian dwindled when I was suddenly asked to do a nude photo shoot. Technically, she didn't ask me, but this is her game, after all. Someone behind Kim Kardashian: Hollywood decided it would be a good idea to have me meet a fancy-schmancy photographer... and then strip down for him.

Let me reiterate: Kim Kardashian: Hollywood asks that you strip down in front of a male photographer.

Marcel Tesiano (a not-so-subtle allusion to photographer Mario Testino perhaps?) is a big deal in Kim Kardashian: Hollywood. It cost me nine whole energy points to introduce myself to him, and those take 45 real-life minutes to earn those points. But I forked them over because I was told he could take me places, and this was before he asked me to get naked. I was still bathing in the glory of my recent promotion to D-List star.

Marcel was so into me that he didn't even put his camera down during our meeting.

He asked me what I thought was most important in life, which is a pretty big question to pop after knowing someone for, like, six seconds. Ironically, I wasn't rich enough to spend the Star Koins necessary to tell him I liked charity. So instead I settled for "Family."

After all, that's what Bruce Jenner taught me.

I should have known better than to listen to Bruce, though. Turns out Marcel is the kind of rich guy who can afford to make charity his priority, and he made sure to tell me so.

But since I wasn't some kind of fame whore who answered "Money," he agreed to work with me anyway. His people called my people, and my manager was really stoked for me.

He told me to hurry to Beverly Hills to learn the details of the shoot. "Okay!" I naively thought as I skipped on over to the studio. Marcel was really nice. This time when I said "hi" to him, it only cost me four energy points instead of nine.

But then he started explaining his project to me.

I re-read his answer about four times. The video game addict in me wanted to press, "Of course." But, in real life I'm not okay with doing a nude shoot, so I thought my avatar should ask a few more questions first. I clicked, "excuse me?" — hey, at least the game gave me an option to be disgusted — and hoped it would be delivered in a nice tone instead of how I felt, which was more like "excuuuuse me?" Marcel seemed pretty annoyed that I dared to question his vision.

But he elaborated for my sake, even though I'm just a lowly D-list model wannabe.

So because our ancestors were naked I have to be? I felt like telling him that the ancient version of that camera he loves to stick in my face is a cave drawing, but the game didn't give me that option. Instead, he apologized for presuming I'd be okay with it. In theory, that's nice of him, but in reality this is a larger issue.

Here's a man, and a man in a position of power over me. And here he is assuming I'd be totally willing to strip down for him. Unfortunately, in real life, it has worked that way. Models trying to break into the business fear they won't ever get work again if they don't go along with everything a director asks of them. It's a depressing reality of the business and it happens from small-time shoots all the way up to ones with famous photographers like Terry Richardson. Known for getting celebs to strip down to nothing, he's also known for having a bunch of sexual assault accusations against him on behalf of his former models.

Once Bachelor contestant and current model Courtney Robertson detailed an experience in her memoir where she was asked to take her clothes off on a shoot she had a teenager. She writes:

I was booked for five days for an astounding $2,000 per day, but on the third day I made a crucial mistake. A photo assistant asked if I would get naked, even though it was freezing outside and it was a back-to-school clothing catalogue for teenagers ... It suddenly hit me that the principal of my school could see these photographs. "No, I'm not comfortable with that," I said, proud of myself. The next day I got back to my hotel room and found a cold, formal note on my pillow, informing me that I was no longer needed on the shoot.

Robertson says the lesson she took from this experience was, "If you say no to nakedness ... you're pretty much dunzo in the modeling business."

But hey! Kardashian's game is just going to ignore all the issues surrounding this type of photo shoot because who cares about real-life ramifications, right?

By the time I met Marcel, I was addicted to Kim Kardashian: Hollywood, so I really wanted to say I had no problem with the nude shoot. I needed to keep advancing my career. But I was still unsure about compromising my morals for a video game knowing the real-life sexual abuse other models have lived through. So I told him I did have a problem with it and waited to be fired. Fortunately, Marcel decided to give me some time to think it over.

He made it pretty clear that he still wanted to hear a "yes" from me but I decided to get the second opinion anyway to see if it would change my mind. So who better to ask for advice on whether or not to do a nude shoot? I was thinking my mom, but since I don't have one in this game, Kim Kardashian was suggested instead.

Here's the dealio with nude shoots. I'm not concerned about his level of genius, or whether I'd be in good hands, I'm concerned about taking off my clothes. The advice I wanted from Kardashian was, "Don't worry if you skip this one, there will be other opportunities." But this is Kim Kardashian. The woman who posed for Playboy draped in nothing but pearl necklaces.

I mean, that's totally fine if she's comfortable with that; I'm just not. And why is the game trying to sway her fans to do as she does? Not everyone is as okay with showing skin, and that should be respected, too.

After Kim's disappointing help, Marcel called me, wanting to know my decision. Now, I had actually played this game up to this point twice because I wanted to know what would happen if I chose both outcomes. The first time, I said yes, and Marcel was a happy clam. I showed up for my shoot, and, fortunately, my avatar wasn't required to strip down for real. Instead, the little blue bubble that you usually click to "change clothes" on a normal shoot just read "disrobe."

But I still felt icky. Especially when a tabloid journalist approached me for my comment on the racy pics. (Also, does he look like Ryan Seacrest or what?)

But when I played a second time, my goal was not to win the game but to get screenshots of the sketchiness, so I felt free enough to reject Marcel's offer.

And how did this impact my career? Pretty horribly.

My avatar may look pretty nonchalant, but in this game, that rejection is a big deal. Willow Pape, my in-game nemesis, landed my big photo shoot deal.

It's impossible to not be disappointed in how Kim Kardashian: Hollywood went down. Not just because her advice was unhelpful, but because she's perpetuating a standard that you need to strip down, to compromise your morals, to succeed. This was her shot to show the young kids playing her game that you should never sacrifice your personal comfort for fame. Not only that, but to make the people playing this game feel like to "win" they have to be pressured into being nude is pretty insane. This is supposed to be a fun look at living another person's life. It's not supposed to pressure you into feeling uncomfortable and taken advantage of. I didn't feel like I could turn the offer down if I wanted to be successful in the game.

Instead of it dooming my career, I would have loved to see Marcel respect my decision and rework his vision so that we were both comfortable. After all, the Kardashians are trying to rebrand themselves with the aim of "empowering other women to be successful." Success should come in many forms. Just because Kim Kardashian rose to fame the way she did doesn't mean we all want that same treatment. A model should be allowed to be successful no matter how much skin she wants to show. Empowering women means to give them the power to make their own decisions, be more confident, control their life, and claim their rights. For some maybe this means the right to disrobe if they want to. But that's not empowering to everyone, so the game shouldn't have basically made it a requirement.

I know Kim Kardashian's game isn't going to change the world, but it sure didn't need to play by the modeling industry's antiquated rules.