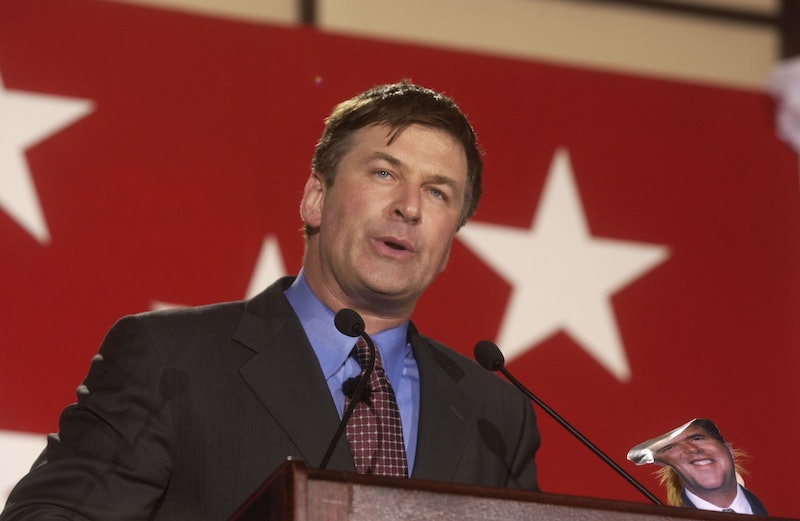 Call me a jerk if you must, but there were few things more enjoyable (in the worst/best way) than Rob Ford this year. The Toronto mayor stole my heart in a batshit, like-watching-a-trainwreck sort of way that truly proved the old adage "you can't make this shit up." But Alec Baldwin returning to TV to play NYC's own version of Ford may even be better. Because who doesn't want to see Baldwin and his political dreams dashed with all his likely to be on-the-nose antics?

According to Deadline, Baldwin is the one developing the TV show idea in conjunction with his overall deal with NBC Productions. In it, Baldwin would play the central character: a major fuck-up of a mayor in New York City. Like Ford — who's had more than his share of run-ins and trouble with ye ole crack pipe, in addition to his generally absurd and manchild-esque behavior in public — Baldwin has had his own bevy of inappropriate outbursts (as much as I love 30 Rock's Jack Donaghy even I have to admit Baldwin's become sort of the worst) and desire to get political — though he'd probably just call himself edgy.

And it's just that edginess that a one-hour cable drama of this sort would need. So, actually, I'm pretty convinced that he'll be able to out-Ford even Rob Ford himself. How?

He's Brash and Outlandish and a Bully

It seems as though every time the camera is on Baldwin as of late, he's got something terrible and/or ridiculous to say. And he also loves talking shit. Even when he's apologizing, he's mostly just making things worse for himself. Three qualities that make his tackling such a role all too appropriate.

He's Had His Share of Run-Ins with The Law

I mean, shoot, just two months ago Baldwin was arrested for illegally biking in NYC, which is apparently a thing (particularly if you're a famous person that the police has a lot of ill will towards). It's exactly the sort of ridiculous stuff that should happen to a political figure. Particularly one that's...

Can we call him the king of the outbursts? Because between calling his daughter a pig, freaking out on an airplane, and his unending "explanation" of his own homophobia makes me feel as though he's sort of got that game on lock. No outburst is successful without a large emotional capacity. If nothing else, Baldwin has proven that much. Passion? Anger? Hatred? Self-Righteousness? Check.

I mean, outside of all of the personality similarities, Baldwin has long had his eye on getting into politics. In fact, he wants to be governor of New York. Now, that it's pretty clear that could never happen for him, so why not flip the script and give yourself the job just on TV? I hate to admit it, but well-played, Baldwin.