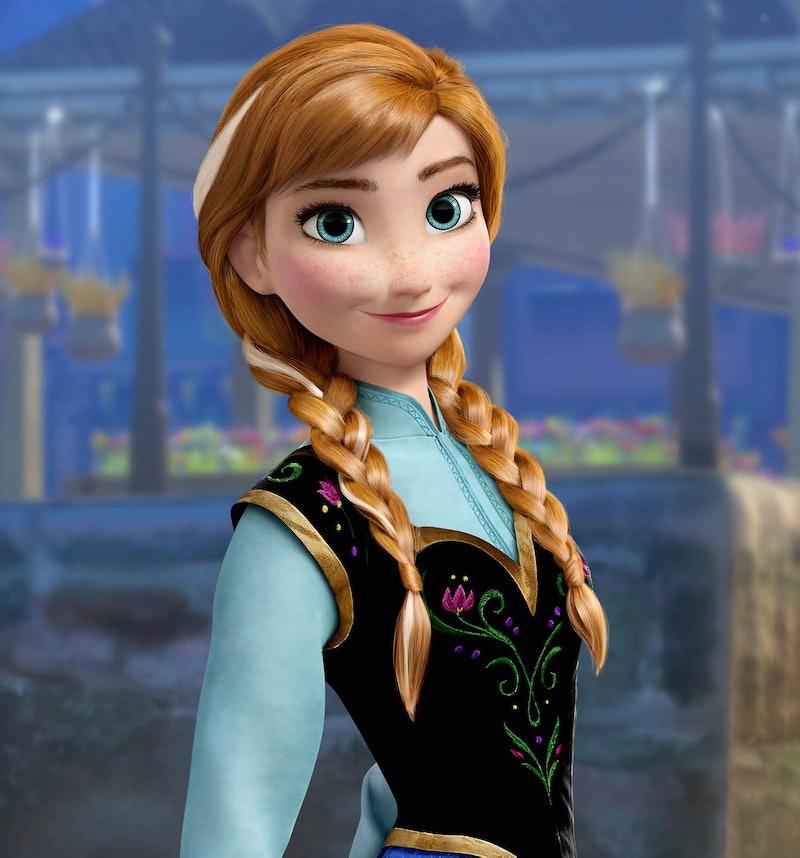 All magic comes with a price, dearies. It’s a warning that Rumpelstiltskin has been gleefully whispering into our ears ever since we first laid eyes on Storybrooke. And now that Once Upon a Time will adapt Frozen in Season 4, one can’t help but wonder what new consequences loom ahead for our beloved fairytale characters. After all, we’ve never met someone with Elsa’s chilling capabilities before now, and if even Rumpel locked her away in his vault for fear of her power, what does that mean for the rest of the Storybrooke gang?

But I’m not here to discuss theories about what exactly Elsa will be up to in Once Upon a Time next season . That’s already been done. No, what I’m more interested in is Anna’s role in all of this. As of now, very little has been said about what we can expect from Elsa’s little sister, other than the fact that she’ll be played by newcomer Elizabeth Lail. She’s also being described as “a fun-loving, fearless optimist who often gets herself into situations where she is in over her head, yet is able to triumph due to her resourcefulness and can-do spirit. She values her relationship with her sister Elsa above all else.”

Not exactly very telling, is it? That right there automatically makes me think the writers have something to hide. The less chatty they are about a character, the more they’re trying to keep secret. But why??? I think it’s the fact that Anna is actually — wait for it — DEAD!

That’s right, I’m calling it right now, folks — Anna will only be appearing to us in flashback form because she ceases to exist in the present day. Just hear me out about this. First of all, it would help to explain why Elsa has been locked up for all these years.

Perhaps after some tragic accident, which resulted in Anna’s death, Elsa became inconsolable and began using her powers for evil rather than for good. In Frozen, Elsa's powers were drawn from her emotions, which we've also seen happen to OUAT characters, so if she was filled with anger and rage, wouldn't her magical abilities reflect that? Maybe it was even her idea to have Rumpel entomb her in the lamp, knowing what a hazard she’s become.

Like I said earlier, Anna would still be able to appear to us in flashbacks to help explain how all of this came to be. But other than that, she’d remain out of the picture and serve as the main motivation behind all of Elsa’s actions, since she's having a hard time coming to gripes with such a profound loss. Some might say, she's unable to let it go.

Anna being dead would also provide a reason behind her youthful appearance (another perk of the flashbacks). Odds are, Elsa’s been thawing in that lamp for quite a few years now, yet she still appears to be so young. Perhaps she was able to remain “frozen” in time due to the Dark One’s magical spell, but what would be Anna’s excuse for not aging? Many are predicting that she, like Prince Eric, has been a member of the Storybrooke community all of this time, but has yet to make herself known. And while that could very well be the case, it seems a little too predictable for these OUAT writers. I mean, these are the same people who transformed Peter Pan into a villain and then revealed he was Rumpel’s long lost father.

So yeah, they don’t necessarily play by the rules. Is it a little morbid to think that Anna is dead? You betcha. But is it completely out of the realm of possibility? Absolutely not. And therein lies the beauty of this series.

Of course, there’s always the chance that Anna’s (possible) death wasn’t just an accident, but actually an act of murder. Once Upon a Time recently cast former Lost actress Elizabeth Mitchell to play a “possibly malevolent” character with ties to both Elsa and Anna. Am I crazy or does this not sound like the perfect opportunity to introduce Hans’ mother? Given how everything went down between her son and these two girls, I’m guessing she’d be looking for a little revenge. What if she got it and now Elsa wants payback? That’s a duel I’d be totally "cool" with seeing. No worries, though — the cold never bothered me anyway.