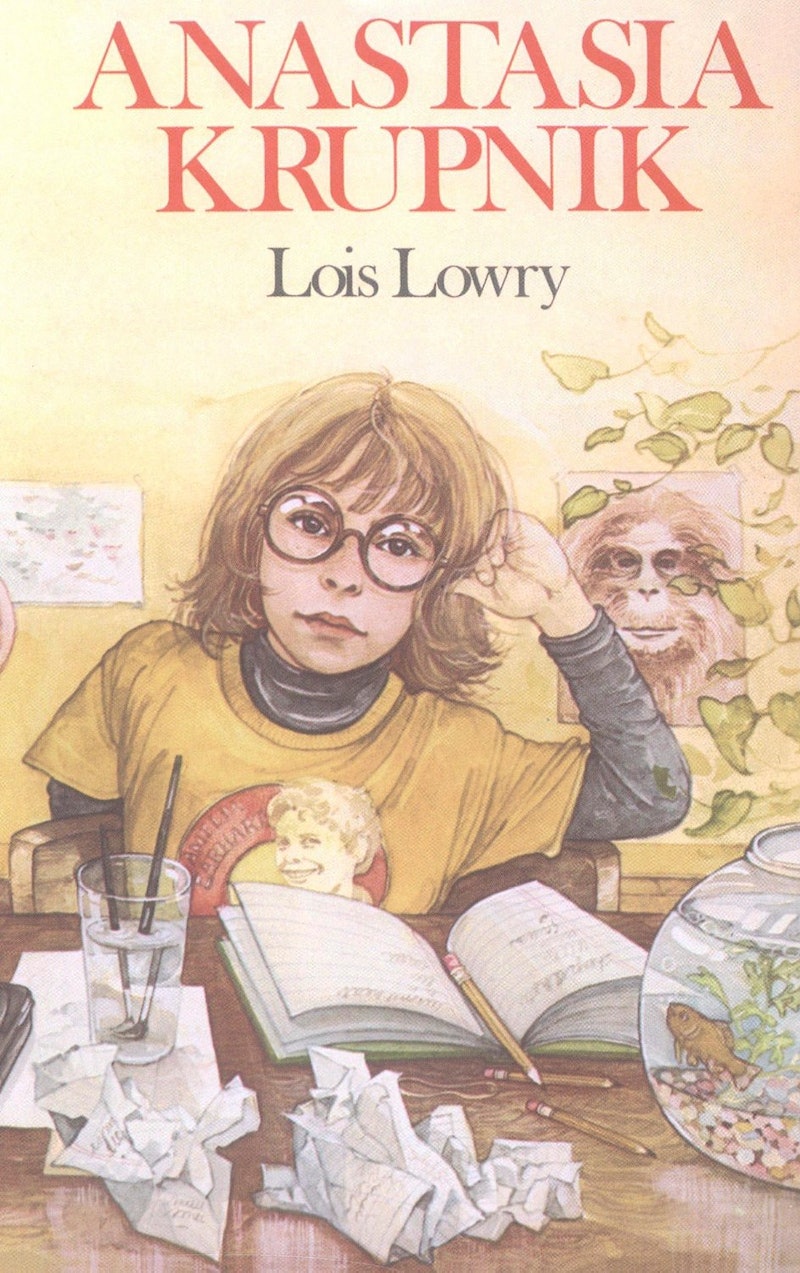 Lois Lowry's precocious 10-year-old Anastasia Krupnik often plays second fiddle to Beverly Cleary's Ramona Quimby. And even within Lowry's massive resume of middle grade books, Anastasia tends to fall third in memory, behind The Giver and Number the Stars. But none of this bothers Anastasia herself — she's probably just putting us all on her hate list. So it's time for us Anastasia Krupnik fangirls to unite and remind everyone what makes this 10-year-old so wonderful.

In the first book of the series released in 1979, Anastasia Krupnik, we meet our heroine shortly after her 10th birthday, when she discovers a wart on her thumb. Though this is her first major event of the year, it certainly won't be the last. She also must face her ailing grandmother, who suffers from dementia and can't ever remember Anastasia's name, her eccentric parents, trying to fit in at school, and worst of all, the news that there will be a new baby brother joining her small family. Anastasia copes with all of these events by writing in her green notebook, including a list of Things I Love and Things I Hate that end each chapter of the book.

Which leads us to the first reason we love Anastasia:

1. She's always open to new ideas, and isn't afraid to change her mind

There are more than a few things that switch back and forth between her two lists, as Anastasia tries to work out how she feels about things. Of course, the new baby is most certainly a thing she hates. But after some time, she can admit that, yes, it's now a thing she loves.

Her on-again, off-again crush on Afro-rocking bad boy Washburn Cummings also moves quite frequently from list to list. Even single women in their 20s and 30s can relate to that one, Anastasia. Just get a glimpse of Washburn:

On the day that he came to school wearing a tee shirt with an obscene saying printing across the front, and was sent home by the principal to change, Washburn Cummings made a quick trip around the J. Henry Bosler Elementary School, appearing briefly at the door of each classroom and opening his jacket to flash the tee shirt at each class. By the time the principal heard he was doing it, Washburn Cummings had flashed every classroom down through the second grade and was already headed down the front steps, bouncing an imaginary basketball and wiggling his hips.

We feel you, girl.

There's Washburn Cummings and then there's Robert Giannini, who frankly is not nearly as cool. And these names lead us to our No. 2 reason:

2. She refers to people always by their first and last names

This detail from Lowry is perfect. Calling people by their first and last names is how many of us kids learned to address our peers in elementary school. Maybe that's because in my school near Boston, like Anastasia's, there were a whole lot of Johns, Michaels, Julies, and Ashleys.

You can tell anyone who has friends from elementary school and is now a grown adult because they still refer to them by their first and last names. I have a best friend — legit, bridesmaid in my wedding best — whom I still call by her given name and her last name whenever I reference her.

But Robert Giannini didn't just show us Anastasia's penchant for names, he also taught us about her artistry:

I have a dog whose name is Spot.He likes to eat and drink a lot.When I put water in his dish,He laps it up just like a fish.

Of course, her teacher loved it. Anastasia's poem didn't rhyme, was all in lowercase letters, and according to her teacher, didn't follow the rules of the assignment. Anastasia got an F, apparently because her teacher had never heard of e.e. cummings. Where her teacher saw failure, we middle-graders saw raw artistic talent, and the passion to stand behind it.

Anastasia's parents saw it our way, too:

4. She has the best, most loyal parents

Lowry has said that she modeled Mrs. Krupnik after herself. When this incident happened over Anastasia's poetry, her father brought her to his college poetry class to observe. When they broke the news that she was no longer going to be an only child, they let Anastasia pick her brother's name. They were secular and eccentric, which bothered Anastasia, but they were immensely supportive of their daughter. Take for example, Anastasia's aforementioned wart.

"It's the loveliest color I've seen in a wart," her mother, who had seen others, said with admiration."Warts, you know," her father had told her, "have a kind of magic to them. they come and go without any reason at all, rather like elves."

But, like most 10-year-olds, Anastasia doesn't always see her parents this way:

5. Anastasia has a bit of a nasty, fighting spirit

Okay so when the Krupniks allowed her to name the baby? She chose a rather "adult" name. Scribbled in her green notebook was the name she chose for her baby brother: One-Ball Reilly. And she could not wait to spring the name on her parents, who so dared to take away her only-child status.

6. But she has a good heart

Fear not, those who squirmed at Anastasia's name choice. You and the book-banning guilds of the world can rest assured that Anastasia decided against her first choice, and chose to name her brother after her late grandfather, in memory of her grandmother who just passed away.

(And yes, of course Anastasia Krupnik is on the 100 most frequently challenged books list. It's been cited because of "use of a vulgarity for human waste." Seriously.)

Anastasia grew up in a secular family, but she's interested in converting to Catholicism. Not for the reasons you might think, however. There are only 14 Catholics in her school, so she'd immediately have a built-in social circle. And when Catholic, she could change her name so that it fits on the back of her shirt without reaching into her armpits.

When she hears you have to confess your sins, however, Anastasia is off the Catholic bandwagon. She learned that stealing cupcakes from your friend is a sin, and she'd have to confess. And she has stolen a few cupcakes in her day.

It's possible that when Anastasia grew up she grew into someone like Georgia Nicolson, who writes a diary about her hilarious (to the readers, probably not to her in the moment) teenage experiences, including the time she went to a party dressed as a stuffed olive.

If we're going to talk about gumption, we have to talk about Catherine, who spends her days fighting off suitors with her wit and trickery, and writes all about it.

A sequel to Stargirl, this novel is told in letter format, from freespirited Stargirl herself to her love Leo. And in the midst are dozens of colorful, eccentric characters to latch onto.

More like this
10 Must-Read New Books Out This Week
By K.W. Colyard
The 20 Best Audiobooks To Fall Asleep To
By Aoife Hanna and K.W. Colyard
A 'Bridgerton' Star Just Dropped A Major Hint About Joining The Live-Action Barbie Cast
By Bustle UK
'Derry Girls’ Dylan Llewellyn Will Star In C4’s New Queer Comedy
By Rachel Mantock
Get Even More From Bustle — Sign Up For The Newsletter