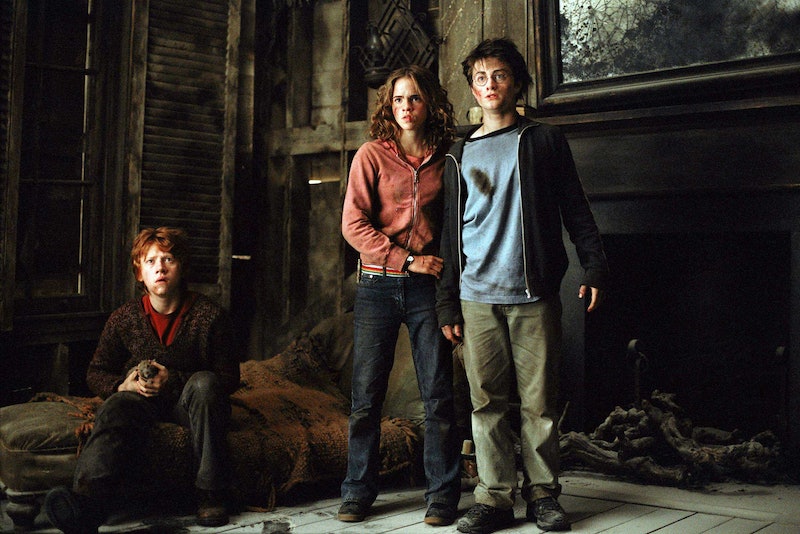 Let me preface this by saying that Harry Potter and the Prisoner of Azkaban is my favorite book of the entire series. So, when the Prisoner of Azkaban movie was released 10 years ago on June 4, 2004, I convinced my mom to let me skip school to see it. (I know, I was a persuasive seventh grader.) Surprisingly, director Alfonso Cuaron didn't disappoint me, even though the film adaptation of PoA fell short when it messed with the book's plot and cut an entire, perfect section from Harry's introduction to Sirius Black. But, unlike all of the changes to Harry Potter and the Sorcerer's Stone , the third Harry Potter film's omissions were glaring and kind of heartbreaking, honestly.

So, with this weekend's Harry Potter marathon on ABC Family, I decided it might be the right time to air my many grievances with this particular part of the Potter film franchise. Not because I don't like it — actually, considering all the changes, it's still one of my top three Potter films — but because it had so much more to give. Even though I love you, Cuaron, here are the 11 biggest book moments that got lost in the film adaptation of Prisoner of Azkaban.

In the book, Harry gets his Firebolt shortly after his Nimbus 2000 blows into the Whomping Willow when the dementors knock him off his broom. Sirius sends him the broom and Ron, Harry, and Hermione argue consistently about it until McGonagall confiscates it to make sure its safe. In the film, Harry receives the broom after he meets Sirius and he and Hermione rescue him.

In PoA, Harry makes two trips to Hogsmeade. During one trip in the book, just outside of Hogwarts, while wearing the invisibility cloak Harry pelts Draco with mud for making fun of Ron, but when his cloak slips, Draco catches sight of his face and he's forced to run back to the castle. In the film, this never happens — instead, Harry pelts Draco with snowballs outside of the Shrieking Shack and scares him, but he never sees Harry's face.

Harry & Hermione Interact With Their Past Selves

In the film, Hermione and Harry interact with their past selves when they travel back in time using the Time Turner. Hermione throws a rock at them while they're outside of Hagrid's Hut and she also remarks on how her hair looks in the back — neither happens in the book.

Perhaps the greatest missed opportunity of all time — in the book, when Harry meets Sirius and Lupin in the Shrieking Shack, the pair give him an entire backstory on their friendship with his father, the use of the Shrieking Shack, and the Marauder's Map. The film does none of this.

Instead of seeing Sirius in his Animagus form of the big, black dog sitting by the stands during his quidditch match like Harry does in the book, the film has Harry see a cloud in the shape of the Grim as he flies towards the snitch.

Another missed opportunity in the film, Sirius and Crookshanks developed a relationship throughout the PoA story that fails to be mentioned in the film adaptation. In the book, Sirius even tells Hermione that she has a very intelligent pet.

In the book, Harry, Ron, and Hermione all jinx Professor Snape at the exact same time, causing him to be knocked out. But in the film, Harry jinxes him alone, resulting in Hermione's exclamation, "Harry! You attacked a teacher!"

Buckbeak Is The Only Hippogriff

What happened to the seven other hippogriffs that are supposed to be on the Hogwarts grounds, as detailed in the book? In the film, there's Buckbeak and only Buckbeak. Laziness.

Harry Practices Magic Over The Summer

Harry's well aware that he's not supposed to practice magic during the summer holidays — whether it's simple magic or not. So why is he performing Lumos Maximo in his bedroom to read his school books instead of a flashlight like in the books? That'd end up requiring a warning from the Ministry of Magic, it's just not right.

In the book, Professoer Trelawney makes her prediction about Peter Pettigrew returning to his Master after Harry's Divination final, but in the film it just happens on a random day when Harry's returning the crystal ball Hermione knocked down the stairs.

The film's versions of Draco, Crabbe, and Goyle operate on a much smaller scale than the book versions when it comes to tormenting Harry. In the film, the trio pretend to be dementors by making ghost sounds and pulling their robes over their heads — in the book, they sit on each other's shoulders and dress up entirely like a dementor before turning up at the quidditch match to scare Harry off his broom.