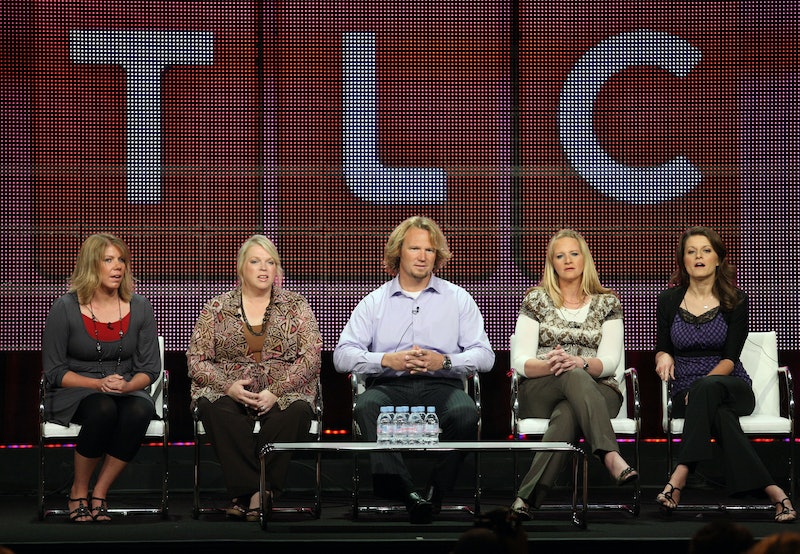 It's hard to trust the business prowess of a family who names their first big venture "My Sisterwife's Closet," but then again, you should be impressed by parents who are five-handedly supporting 17 children. Even if Kody, Meri, Janelle, Christine, and Robyn, (in)famous for their TLC show, Sister Wives , were single parents, they would still average raising 3.4 kids each. Amongst the many questions that rattle through anyone's head while watching Sister Wives — and there are plenty — my main query has always been: How does the Brown family make enough money to finance a fleet of McMansions and a football-team-and-a-half worth of offspring?

The premiere episode of Sister Wives told us that, of Kody and his four wives, Kody, Janelle, and Meri worked, while Christine and Robyn stayed home with the kids. Meri promptly lost her job because of her involvement with the show, and Kody was helpfully vague about his employment. It was implied that he was in some sort of Internet advertising sales before the show began, but since 2010 he's been more in the business of incorporating his family. They've got a detox line, y'all! And the slogan is, "Detox the world one family at a time." Not kidding.

Janelle, at least for the first few years of Sister Wives filming, was the big bread winner for the Brown family unit. Janelle ran a business called E Z Pantry, which aimed to “provide, market, design, sell or trade in the food storage industry,” a particularly lucrative market in the fundamentalist Mormon community. E Z Pantry is not assuredly in the past, but considering that it doesn't have a website, a Yelp page, or a blog that proceeds past 2008, that business probably went the way of the Browns' life in Utah.

Poor Robyn. ... She just wants to find her place among her three other sister wives. Meri, Janelle and Christine had what they thought was a pretty good thing going for 16 years, and then Kody brought Robyn into the mix. Looking to earn her keep, Robyn started a jewelry line: My Sisterwife's Closet. The entire family has inexplicably thrown all of their weight behind this business, which is ... not a good idea.

The Brown family likely now makes all of its money from its involvement with Sister Wives. Kody and Meri collectively filed for bankruptcy in 2005, and Christine filed in 2010, just before the show began filming, according to documents posted by a Scribd user. The family was in a great amount of debt before the show began (and before they brought in Robyn and her three children), and now, while still not in a totally financially sound place, seem to rely on TLC as a lucrative source of income for supporting their family. When looking at the similar situation of Kate Gosselin, who earned $250,000 per episode for her Kate Plus 8 TLC series, The Stir estimated that the Browns pull in around $50,000 per episode. If that's close to the truth, it doesn't make 17 mouths easy to feed, but it does make the Brown's situation less ... curious.