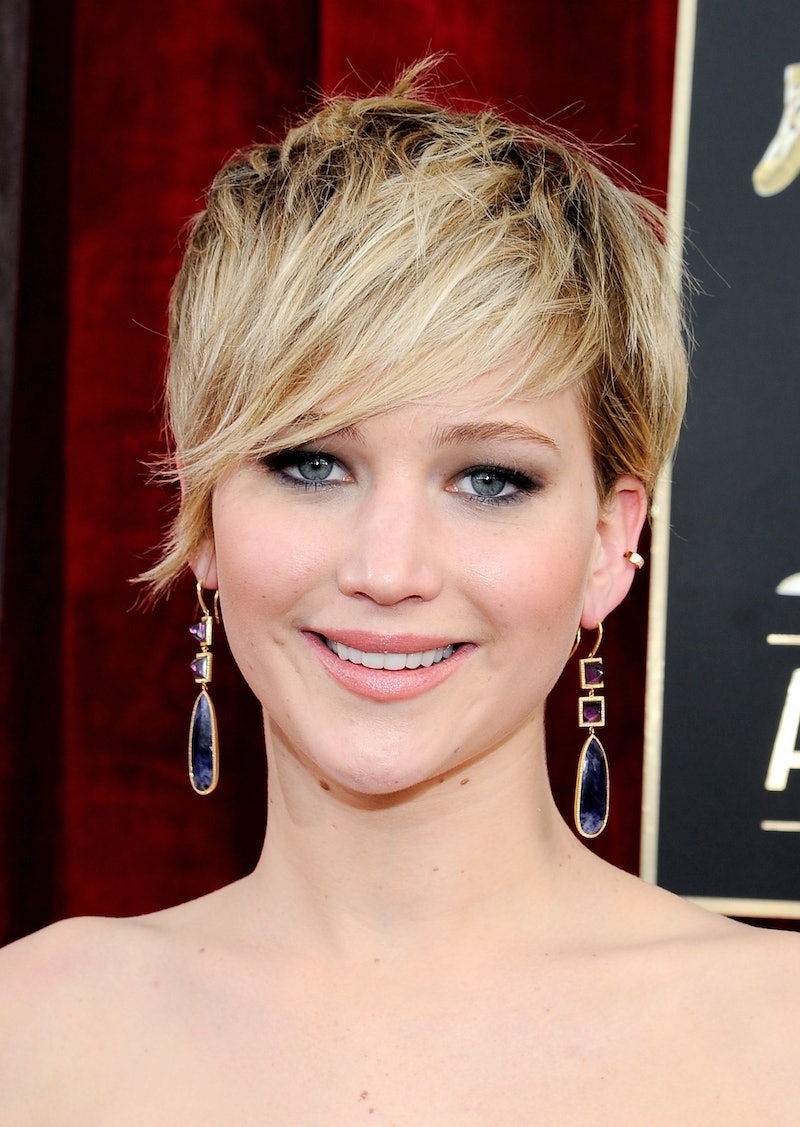 Jennifer Lawrence is a lot of things — brutally honest, hilarious, self-deprecating, crude, endearing — but what is perhaps most surprising about the Academy Award winner is her penchant for actually being quite serious when she needs to be. While known for her quick witted quips and cheeky one-liners, J. Law knows how to get real, too. In fact, she may just be one of the realest celebrities of our time. Why? Because she isn't afraid to step over that political correctness line and say what everyone is really thinking. She is who she is and she makes no apologies for it. And she doesn't want you to make any apologies for who you are, either. That's why I've decided to round up Jennifer Lawrence's most empowering quotes.

Lawrence doesn't discriminate where she flaunts her cool 'tude and realness. Whether it's flashing the finger on the red carpet or declaring that she wants to pull a "Mean Girls" and give her award to everyone at The Golden Globes because everyone "deserved it," not just her. But some of her greatest and most empowering quotes happen when she's given the floor for more than just a thirty second awards show speech. Her personality truly shines through in interviews, when she's given the opportunity to discuss her feelings at length.

Here are some of J. Law's most empowering quotes that she's dished out throughout the years:

In an interview with Vanity Fair, "Everybody’s like, ‘How can you remain with a level head?’ And I’m like, ‘Why would I ever get cocky? I’m not saving anybody’s life. There are doctors who save lives and firemen who run into burning buildings. I’m making movies. It’s stupid."

To Barbara Walters, "I just think it should be illegal to call somebody fat on TV. I think the media needs to take responsibility for the effect it has on our younger generation, on these girls that are watching these television shows and picking up how to talk and how to be cool."

ON MAINTAINING A GOOD WORK ETHIC

Acknowledging that it's been awhile since she's taken a break from work, Lawrence tells Vogue, "This is so much more important than a vacation. It’s so much better for my brain to be creatively stimulated in this way.’ It reminded me: This is what I love.”

ON TRUST IN A LONG DISTANCE RELATIONSHIP

Talking about her boyfriend, she tells Marie Claire, "Obviously you know what they're doing, and you trust them... At least this way he's in the same boat as I am: We can go out and have our own lives and know that we have each other."

ON WOMAN TO WOMAN HATE

Referring to mean girls in Hollywood, she tells Access Hollywood, "I think that we [women] are just so unsupportive. When I watch these shows and the media and I watch the women on these televisions shows pointing to these women and judging them and calling them ugly and calling them fat. It’s just like, where have we come? Why are we here? Why are we doing this to each other? Men were doing it hundreds of years ago and now we’ve turned around we we’re doing it to each other."

ON WHAT SHE LOOKS FOR IN A TRUE FRIEND

In an interview with Marie Claire, "I don't trust a girl who doesn't have any girlfriends. I have really close girlfriends, but they are guys like me—girls who eat and don't know anything about fashion."

ON DEALING WITH BULLIES

In an interview with The Sun, "Don't worry about the bitches — that could be a good motto, because you come across people like that throughout your life."

ON BEING COMFORTABLE WITH HER BODY DESPITE HOLLYWOOD PRESSURES

In an interview with Marie Claire South Africa, "I’d rather look chubby on screen and like a person in real life.”

ON BEING YOURSELF UNAPOLOGETICALLY

In the same Marie Claire interview, "My New Year’s Resolution is to stand up for myself. It’s hard for me. Nobody wants to be disliked. You always want to be polite and be nice. I tried to find a balance in saying what I mean and still being nice. I can’t do it. I have this ‘okay’ attitude and everything. I end up allowing myself to get walked over and resenting it."