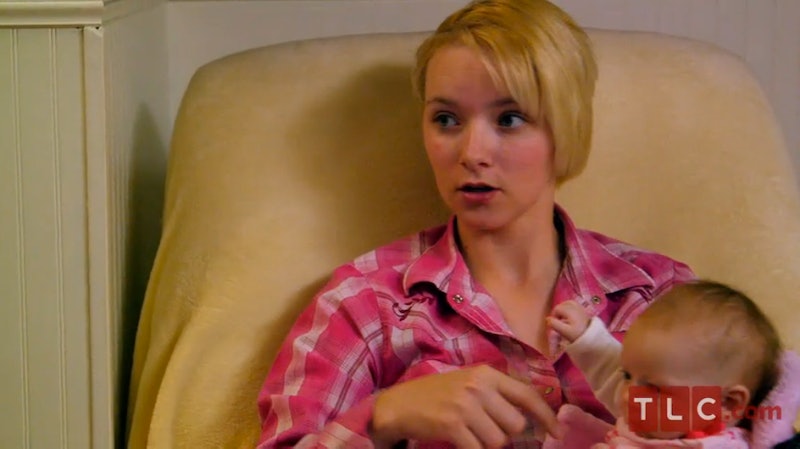 We are really getting into some major drama as we approach the wedding of the century on Return to Amish . In last Sunday's episode, mother Mary told the group that she and Chester would not be attending Andrew and Chapel's wedding because Andrew has been shunned, and they are trying to get on the good side of the church. Andrew and Chapel predictably freaked out, and we'll have to wait and see how it all unfolds. From photos already released of the wedding, it looks like Mary and Chester actually do end up attending. I wonder what made them change their minds. Could Rebecca and her many wise words possibly have something to do with it?

On Sunday night's episode, Rebecca will offer "some important advice," according to the vague episode description. There's no telling what the advice is or who she's giving it to, but one thing we do know is that Rebecca does love offering her opinion, whether it's solicited or not. This is why she often butts head with Mary, because you know, Mother always thinks she knows best. Though Rebecca's truth bombs aren't always welcome, they are in fact usually on point. Rebecca is basically your new life coach. You're welcome.

Here are six of Rebecca's best words of wisdom, so you can all live happier, healthier, and more Andrew-free lives.

"I'm not just going to sit back while somebody's trashing the Schmucker name."

When Rebecca heard Andrew was seen around town in bars and other places that could violate his parole, she was none too pleased and wanted to set him straight and protect her family. Rebecca is probably one of the more confrontational Return to Amish cast members, but it works because she gets stuff done.

"Jeremiah always annoyed me, but now that he's staying with my in-laws, everything about him just pisses me off."

Viewers have learned this season that Jeremiah has had a rough go of it since he left the Amish, so there's definitely a part of me that sympathizes with him. But Rebecca gets the situation, and I mostly just feel the way she does.

"Andy sleeps with anything that walks."

And Rebecca knows because she maybe kind of sort of possibly slept with him. She's gone back and forth on this issue so many times, it's hard to tell. However, we do know that Andrew likes the ladies, and he has cheated on Chapel in the past, so look out for yourself, girl.

"I never imagined that coming from the Amish, [Kate] would go that far, but if that's what she wants to do, that's her work, that's her job, and she obviously loves it. That's what matters."

This is a really mature stance for someone who is usually judgmental. Even though Rebecca doesn't agree with Kate's career choice, she'll support her because she knows it's her passion. These are truly words we all should live by.

"You can never have too much support."

Rebecca said this in regards to the impromptu baby shower/Sunday Visit she threw for Sabrina and her newborn baby Oakley. She knew Sabrina hasn't had a lot of familial support since she got pregnant, so having gone through one pregnancy and in the midst of another, Rebecca really showed her new maternal attitude and took Sabrina under her wing. When your friends are in need, support is the best thing you can give them.

"I definitely need to learn how to shut my mouth more."

Rebecca is so self-aware, she even knows that she voices her opinion a little too much sometimes and can get herself into trouble. We'll just have to see if she is wise enough to actually take her own advice.