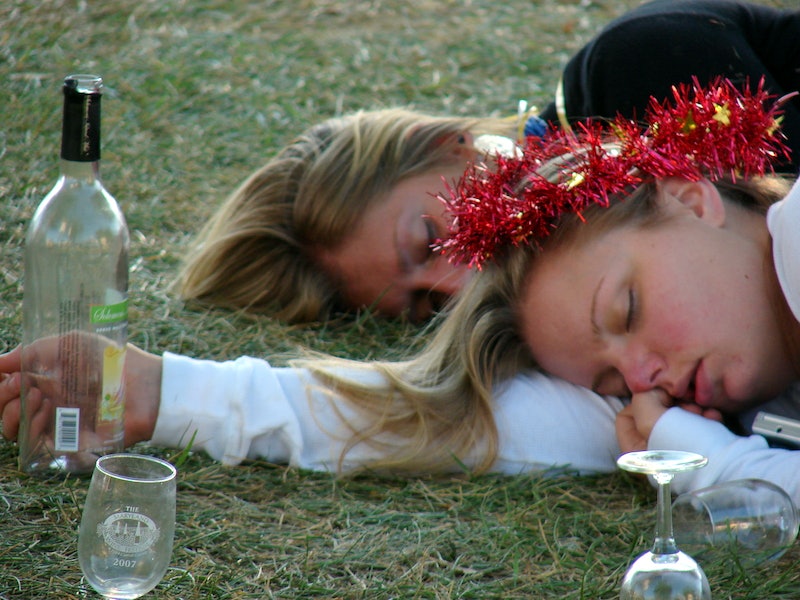 Chugging beers and wearing sweatpants: Sounds like an ideal college experience? To some, it does, and it's totally cool that university ladies get a say in what they do and don't do on and off campus. But a recent piece in The Atlantic about the Tiger Inn co-ed frat glossed over the different pressures these 'lady bros' might feel to fit in. At least this is what Katy Waldman argues in Slate with "The Ambiguous Rise of the Lady Bro."

Tired of pearl-wearing sororities, a number of ladies at Princeton gleefully joined eating club — i.e., co-ed fraternity — Tiger Inn (TI). They love it so much that for the first time ever, more women than men have pledged. And the pledge is nothing easy: to get into TI, students, smeared in ketchup, maple syrup, and egg yolk, must swallow live goldfish and eat dog food while doing push-ups.

Despite how unappealing all this sounds, women are aspiring to TI membership precisely because of this debauchery, according to The Atlantic's Caroline Kitchener. Not so surprising when you consider that college women today are more likely than men to exceed the weekly drinking limits set by the National Institute on Alcohol Abuse and Alcoholism, as an upcoming study from Alcoholism: Clinical & Experimental Research shows.

According to Kitchener, the appeal is all about feeling like your gender role doesn't limit you:

Most of the women that I talked to in Tiger Inn chose their eating club because they felt like gender roles were less rigid in a place like TI. It wasn't necessary for women to act "all put-together." They could relax, which was exactly what they wanted. As one rising TI senior told me, "The guys always want us girls to chug a beer or take a shot, or be a man. There is no pressure for a girl to be a girl."

"Girls can say, 'Last night I blacked out somewhere,' or 'I woke up somewhere,'" a recent female TI graduate said. "No one cares."

Aside from how unsafe this all sounds (um, rape?), Waldman rightly points out that this is just another culture women try to fit in with. They might not ask you to act like a 1950s college girl, but peeing in bathroom sinks and blacking out doesn't have to be the only other option — and it'll still get you lots of attention and scrutiny. Waldman sums it up pretty perfectly:

[Kitchener] paints a picture of college women who are (understandably) fed up with feeling scrutinized and pressured. On which, two points: First, apparently being a women is so linked to being watched and policed that girls believe they can only escape social pressure by acting hyper-dudely. And second, is playing by the body-fluid-soaked rules of the boys’ club actually such a liberating experience for women?

As women, we should seek to redefine, or, even better, eliminate gender roles for ourselves, not feel like we need to take on men's equally ridiculous prescribed gender role. Sororities' restrictions and rules are silly because they enforce a rigid notion of femininity. Fraternities do the same for masculinity. Both extremes are flawed, and we should strive for the freedom to do whatever the heck we want, whatever our gender. Getting piss-drunk to the point of danger and having someone force-feed you dog food should never be considered liberating. Rather, it should be seen simply as what it is: Just plain stupid, for women as well as men.

More like this
The “Me Talking To” TikTok Trend Is A Viral Way To Throw Shade
By Emma Carey
23 Abortion Funds In States With Trigger Bans To Donate To
By Emma Carey
Meet The Disney Imagineer Bringing 'Guardians Of The Galaxy' To Epcot
By Charlie Mock
Here's Your Daily Horoscope For May 16, 2022
By Mecca Woods
Get Even More From Bustle — Sign Up For The Newsletter