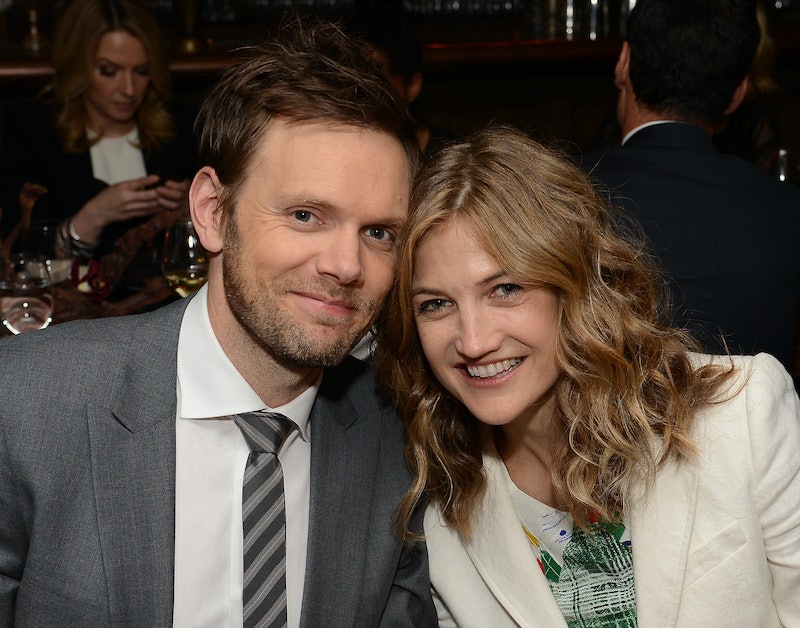 While he is best known for his snarky critiques of the reality TV world on E!'s Emmy-nominated The Soup, Joel McHale also brought his irreverent and hilarious wit to his other TV show Community. Besides TV gigs, McHale keeps extra busy by playing some real jerks in movies like What's Your Number? and Ted. In both movies, he plays the pervy boss of the leading women and tries (and one time succeeds, leading to the creepiest hand-smelling moment in movie history) to sleep with them. But despite these roles he plays, he's actually a really devoted husband to his wife, Sarah Williams. So what's her deal?

When asked how he keeps his marriage fresh in an interview with WebMD (yes, WebMD does celebrity interviews), McHale said:

You have to choose your spouse every day. Tell yourself that this is the person that I love and want to be with. It has to be something that you do consciously, then it becomes subconscious.

Although this may not seem romantic, I think it's super romantic. In a relationship, there is always the potential that you could choose to be with someone else. But marriage is not about all of the people you're not with — it's about how you've chosen this one person to love for the rest of your life. Marriage takes more than just love and it's refreshing to see a celebrity talk so deeply about it.

McHale met Williams just one year after graduating from the University of Washington 1995. And now, almost exactly 18 years later, they are still going strong.

The long-term couple have two sons — Edward (Eddie) and Isaac. Edward was born with two holes in his heart and had open-heart surgery as an infant, but is healthy now. When asked about dealing with his son's health issues, McHale said:

You have to dump your life into your child. You have to live for them. That's when you really have to be a parent and shower them with love, even if they are tiny and don't understand what's going on.

Back in 2011, McHale took a break from stand-up comedy so he'd be able to spend more time with his wife and children (which makes total sense since he was doing two TV shows and movies as well). Now, the dad gets to brag about his "hippy" kids on The Ellen DeGeneres Show.

I think his devotion to his family is what makes McHale so appealing. Underneath his cynical exterior, he's really a good guy. His best quote about marriage though has to be when Good Housekeeping asked him what the best thing about being married was. He responded with, "You get to have sex with your best friend." When asked what the worst thing was, he said, "When you get denied sex by your best friend."

There's not much about Williams herself on the Internet, but maybe she wants it that way. After all, her husband is the celebrity — that doesn't mean she wants to be. (With the exception of a red carpet premiere every now and then.)

When the pair first moved to LA from Seattle, McHale told Williams they could move back if he wasn't successful. Lucky for him (and us), he was.