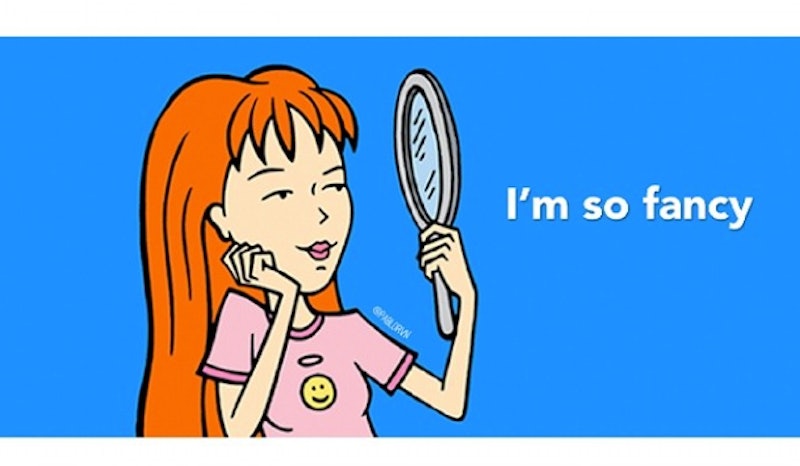 President of the Lawndale High fashion club is a tough job, but someone’s gotta do it. Quinn Morgendorfer is just the girl for the challenge. Quinn from Daria is scholar of all things mall-related, a guru of bouncy hair, and a treasure trove of slightly off nuggets of wisdom. Delivered in an “I’ve learned something today, guys” tone with a cock of her head, she would make insights about her favorite subjects—fashion, beauty, and herself— all lines worthy of a Cosmo column. Actually, we wouldn’t be surprised if that was what she ended up doing…

In spite of all her apparent ditziness, Quinn supplied a veritable Farmer’s Almanac of fashion epigrams to your favorite '90s adult cartoon. Often times, little gems hidden in these ideas betrayed her as a deeper character than her behavior would reveal. That said, the depth was often buried under mountains of superficiality and self-aggrandizing, but it was depth nonetheless. Then again, if she shared these tidbits in any other way than with a flip of the hair and vocal fry, she just wouldn’t be herself. Her first language is Cher Horowitz, not Liberal Arts.

So while you’re assembling your outfit today, keep some of Quinn’s wisdom in mind. Here are her best quotes about fashion, style, and beauty from over the years — the clueless, the problematic, the conceited, and the awesome.

"And you too can have bouncy hair. If you just take the time to bounce from the inside as well."

“As far as I’m concerned, the only difference between school and prison is the wardrobe.”

"Dressing in black is a fashion statement. It's deep, it's meaningful, and it's slenderizing."

On being an icon:

"I want to be a role model for all people, even the ones who need makeup really badly."

On subverting conventional sexuality through dress:

"I decided I shouldn't wear shoes that kill me because they make my legs look hot."

"I mean, my legs look hot no matter what I wear. They'd probably even look good in those things you have on."

"My entire shoe collection is based on the concept of dating guys three inches taller than me or more!"

"Power yoga is a really good thing to do because inner beauty is just as important as outer beauty... Like, can you have a CD without a CD player? I don't think so."

On being a fashion humanitarian:

"Fashion is fun and everything, but we should really do something about the rain forests and stuff..."

Well put, Quinn. There you have her — the Confucius of cuteness.