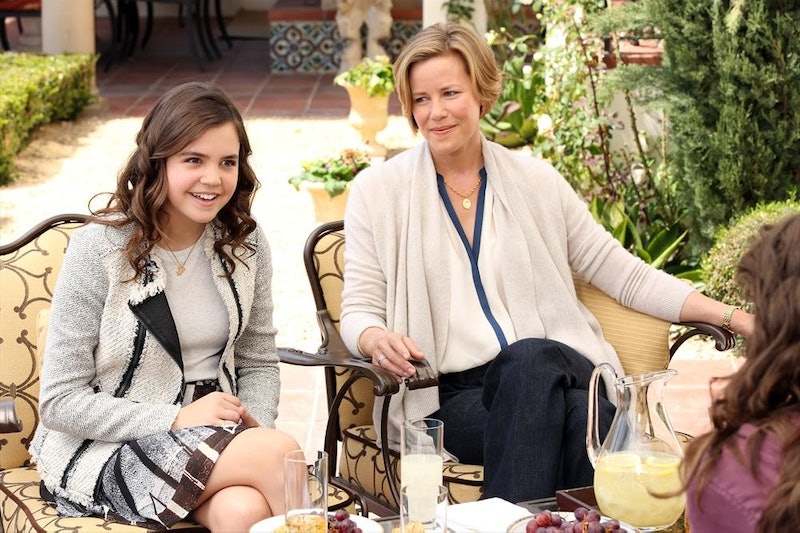 As much as I am skeptical of Callie's new long-lost father on The Fosters , I can't help but have a warm feeling in my heart for her newly discovered sister, Sophia. It's possible that this is because the girl who plays her, Bailee Madison, is just so damn cute, but I also like to think it's because the Callie and Sophia really seem to get along well in their first hangout and bonding session. But how long will Sophia be on the show? And how much will her appearance in Callie's life affect the rest of the Adams Foster family — especially Jude? For now, it seems like she might be here to stay, at least for the majority of Season 2 as Bailee Madison was cast in a recurring role for the season.

Sophia will likely be on the show as long as her father is, but hopefully she won't be as sketchy as Robert appears to be at the moment. I know that I should give him the benefit of the doubt considering he wants to set up a college fund for Callie and keeps talking about how he just wants what's best for her. But maybe I think like Callie and just can't believe everything will turn out great and this whole biological family thing will work out perfectly, because everything Robert says sounds like malarkey.

But there's something about Sophia that makes me think even if her father is spewing pure BS, she's genuine about her interest in getting to know her sister. There's only one problem: Will Jude be alright if Callie bonds with Sophia? Considering he went mute for the rest of last Monday's episode when Callie asked him if he would be comfortable with her meeting Sophia, probably not. It might seems like Jude stopped speaking because of his Connor issues, but surely Callie will notice his change in demeanor if Sophia starts coming by the house, right?

As much as I like Sophia so far, I can't condone anyone hurting Jude. The kid has already been through so much, most of it with Callie. It would be such a shame if Callie started spending most of her time with her biological family and less time with Jude. Not that I believe she would ever ignore Jude but she could potentially choose getting to know her new sister over spending quality time with Jude and the family.

In a perfect world, Sophia could get integrated into the Adams Foster family, not as a foster or adopted sister, but just as someone who can bond with everyone and not step on any toes or previously established relationships.

And that means that Callie and Jude really need to work out whatever issues Jude has with Callie bonding with her new family. Jude meeting Sophia could be the first step towards not only rectifying the situation but allowing Jude and Sophia to bond as well. A friendship between those two has the potential for some great TV moments. And wouldn't be nice to see everyone getting along for a change?

More like this
Here’s What 'Sister Wives’ Star Christine Brown Has Been Up To Since Leaving Kody
By Grace Wehniainen
'House of The Dragon' Episode 6 Will Take Place A Decade After Episode 5
By Kadin Burnett
The First Clip From Netflix’s Queen Charlotte ‘Bridgerton’ Prequel
By Bustle Editors
The ‘Emily In Paris’ Season 3 Release Date Is Here, Plus The First Footage
By Bustle Staff
Get Even More From Bustle — Sign Up For The Newsletter