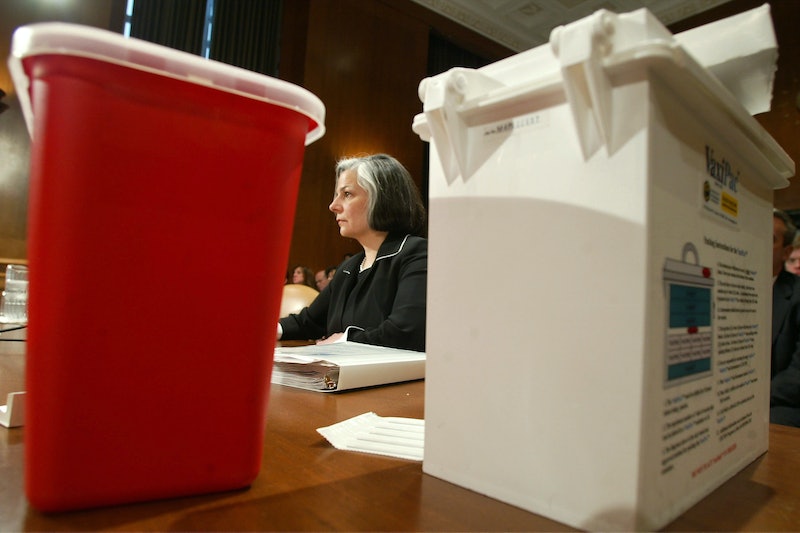 The cause of the zombie apocalypse we're all waiting for might just be lapses in safety procedure. The CDC had to close two labs this week after some mishaps involving live germ samples, and it has decided to stop shipping deadly bacteria and viruses from lab to lab. The Centers for Disease Control and Prevention, which is tasked with disease research and preventing said zombie apocalypse (seriously), has, in recent months, faced crises involving diseases no less than anthrax, bird flu, and smallpox. Closing some labs is the least they could do.

The debacle began back in March, when a CDC lab (one of the two that have been shuttered) sent some fairly benign flu samples to the Department of Agriculture for research — samples that were contaminated with H5N1, otherwise known as avian flu, otherwise known as a superscary disease that was in no way a fun surprise to receive in the mail. The samples were destroyed once the Atlanta-based lab noticed the serious oversight. But the fact remains that the lapse happened. What's more, nobody ever reported it, leaving CDC Director Thomas Frieden to finally find out this week during investigations of a different safety lapse. For those of you keeping score at home, that's four months between horrifying potential calamity and the report. "I'm upset, I'm angry," Frieden said during a teleconference on Friday. "I've lost sleep over it and I'm doing everything I can to make sure it doesn't happen again."

The investigation that brought to light the avian flu debacle involved another frightening disease that's been in the news the last few years: anthrax. That particular incident involved a high-security lab — which is the other location shut down this week — sending samples of the deadly bacteria to a lab with fewer biosecurity safeguards. Needless to say, the ostensibly dead samples were very much alive. Per Bustle:

The U.S. Department of Agriculture (which took over the investigation from the CDC to avoid conflict of interest) believes it has found multiple protocol breaches, from the unexpected to the obvious. The high-security workers were trying a new method of inactivating the anthrax by using chemicals instead of radiation. Since the method is a fairly new development, unexpected things were likely to happen. Which is why workers were supposed to wait 48 hours before sending off any samples that looked dead. In a spectacular oversight, the Bioterror Rapid Response scientists only waited 24 hours.

Of the over 80 workers who were potentially exposed in that case, none ended up being infected. And three other such incidents in the past decade, none of which apparently resulted in infection, were also detailed in this week's report. Next time, though, lab workers might not be so lucky. Such egregious safety lapses are no small concern for the high-end labs that deal with some of the world's most deadly viruses.

And not to be left out of the fun, the National Institutes of Health had its own lapse this week when workers at that agency's Bethesda headquarters found six old vials of the smallpox virus just lying around in an old storage room. After some investigation, two of the vials were found to still contain live samples. The samples will all now be destroyed — in full view of World Health Organization officials, just to make sure everything is done right this time.

More like this
How The City Healed Five Years On From The Manchester Arena Attack
By Ella Glover
Michigan’s Governor Is “Going To Fight Like Hell” To Protect Abortion Access
By Andrea Zelinski
Plan C Vs. Plan B: What's The Difference?
By Lexi Inks
11 Benefits Of Cross-Training
By Carolyn Steber
Get Even More From Bustle — Sign Up For The Newsletter