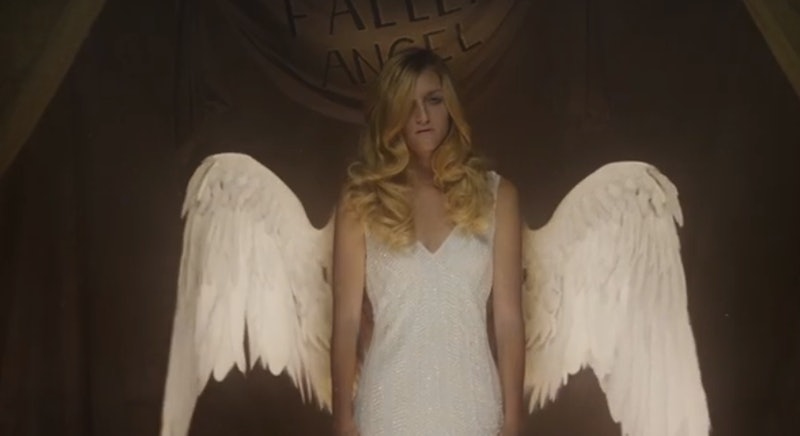 Update: The Freak Show trailer is fake. The network hasn't released an official one, yet. Bummer!

It's about time we got more teasing glimpses into American Horror Story: Freak Show . We got that picture of Sarah Paulson as the "two-headed woman," but that was just a mock-up and not an actual shot from the series. The first official teaser for the season also doesn't show any actual new footage — but it does a pretty good job showing us a little bit of the freaky aesthetic they've got in store for us.

We know both a whole lot and nothing much about the fourth season in the anthology series. We know that it will take place in the 1950s in Jupiter, Florida, and that it will take place in the waning of the freak-show circuit. We know that Paulson will play Betty and Dot, two women who share a body. We know there will be a bearded lady, and that many of the cast from the previous season (not Connie Britton, sorry) will be returning. We know The Shield 's Michael Chiklis and The Hunger Games ' Wes Bentley will also be present.

Further details — to do with plot details, character arcs, backstories, dynamics, etc. — are still scarce. But this first teaser does, well, tease some interesting things about the season, particularly when it comes to the manipulation and exploitation inherent in the setting. Watch for yourself to see what we mean:

More like this
David Tennant’s Transformation In ITV’s 'Litvinenko' Is Astonishing
By Sophie McEvoy
Idris Elba "Breaks Out" Of London In 'Luther' Film First Look
By Sam Ramsden
Here’s Everything Coming To & Leaving Netflix In December
By Jake Viswanath
Yes, That's Lindsay Lohan's Sister Singing In The 'Falling For Christmas' Movie
By Radhika Menon
Get Even More From Bustle — Sign Up For The Newsletter