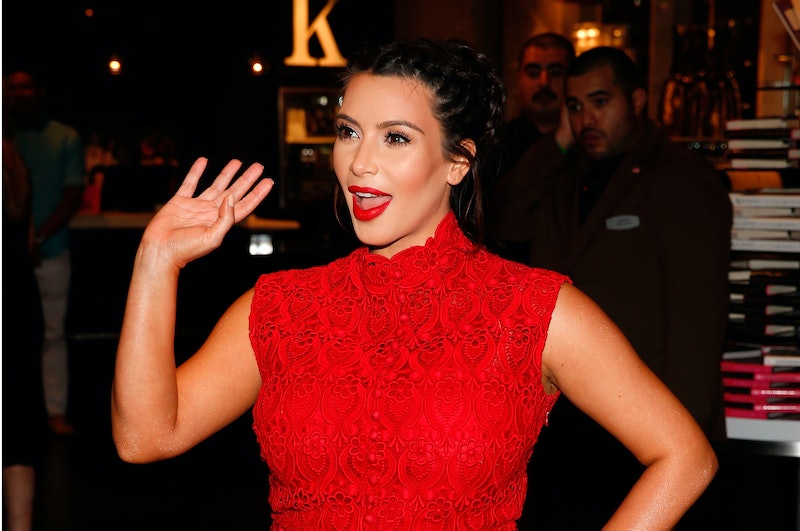 You know what the world needs more of? Super expensive baby clothes. Why spend a reasonable amount on a onesie that your precious baby will grow out of in a matter of weeks when you could spend five times as much as on a designer piece of cloth the size of Shaq's palm? According to designer Lloyd Klein, Kim Kardashian is starting a baby clothing line. The Kardashians haven't confirmed, but it reeks of something they'd get behind — using baby North West as a ploy to hawk a product sounds about right.

Klein says that he's confident Kim will get into the baby clothing arena, telling L.A. Confidential "I am sure she is going to come up with a line for babies," so it seems like only a matter of time before we start seeing Kardashian branded swaddles sitting on the shelves of the Dash boutiques, and maybe Sears, a store that already carries the sisters' adult clothing line, the Kardashian Kollection.

Here's where it gets fun, though. Even though Kanye West is himself a designer, it would seem that using his daughter North as some sort of brand ambassador of burp cloths would incense the man. Reportedly, Kanye wants to keep North out of the spotlight, for, I don't know, ever, but apparently, Kim has other plans. She's busy dreaming up oh-so original baby onesies that will have birds on them, or compasses, or Bentleys.

So far, North West has remained hidden from the world, but now that it's been almost a month, it seems like Kim's ready to use her daughter as a poster child for the launch of her latest business venture. My, the apple certainly doesn't fall far from the tree. Kris Jenner pimps out Kim, Kim pimps out North ... in 30 years, the cycle will surely continue when the next Kardashian/West is brought into the world.