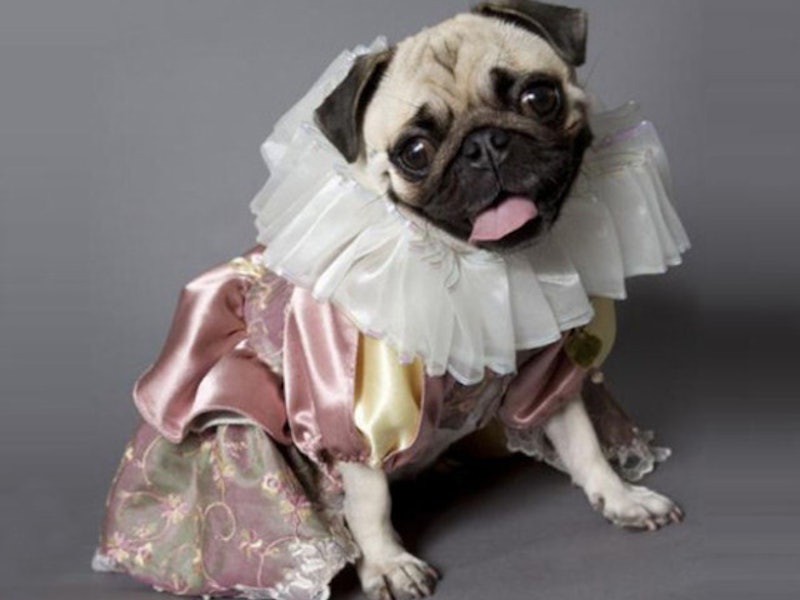 In a refreshing phenomenon, pugs are starting to take their rightful place as the models, actors, and entertainers of the future. This was showcased by Pugs of Westeros, a wrinkle-faced, wet-nosed take on Game of Thrones, and by an all-pug remake of Independence Day. However, the diminutive breed's next challenge is bigger than any of the others it's taken on yet: a theatrical production of Hamlet . Visionary Kevin Broccoli has created a Kickstarter in order to make his dream of this canine production a reality.

Unlike that one Kickstarter whose only purpose was to fund the making of potato salad, this Kickstarter campaign has some truly lofty ambitions. On project Pug-let's Kickstarter page, Broccoli wrote, "For years I've dreamed of mounting one of Shakespeare's most glorious works with nature's most glorious creation: The pug." All right, pugs plus iambic pentameter equals the kind of theater legends are made of. Sounds logical enough. And according to Broccoli, the connection is only natural:

"To be honest, pugs always remind me of Hamlet," Broccoli said. "Always kind of sad and brooding even though they bring so much joy to others."

Oh, that this too, too solid flesh would melt. Literally. Into a puddle of furry melancholy on the floor.

Broccoli accepts that there may be some challenges accompanying his brilliant idea. Under the "risks" heading of the Kickstarter page is a line about finding pugs that don't mind performing for five hours. All I can say is: Good luck with that, dude. I'm a human performer, and a five-hour performance would have me piddling onstage and taking puppy naps, too.

Broccoli told Mashable that he wants real actors like James Earl Jones to stand backstage and read the parts aloud as the pugs act out what is possibly the most well-known tragedy ever written. In order to attract the necessary funding to realize such lofty goals, some of the Kickstarter rewards include petting the pugs (!!!), a video message from the pug-playing Hamlet, and having the director personally cook you spaghetti. Which raises the question: Is it good spaghetti? Can Broccoli even cook? (I'll stop before I devolve into a Hamlet-inspired, question-filled soliloquy, but you get the idea.)

Broccoli needs to find this pug, wherever he is, because he has major star potential. It's in the head-toss.

The Kickstarter has 22 days left and $970 out of $5,000 funded, so what are you waiting for? Get thee to a nunnery (or, um, Broccoli's page) and drop a dollar or two. After all, this production ought to have the opportunity to be, rather than not to be. Though it may suffer the slings and arrows of intense pug-training, it's sure to be an illuminating process — and any mashup of dogs and Shakespeare is worth it, in my book. After all, the play's the thing, amirite?

Thank you, thank you, I'll be here all week.