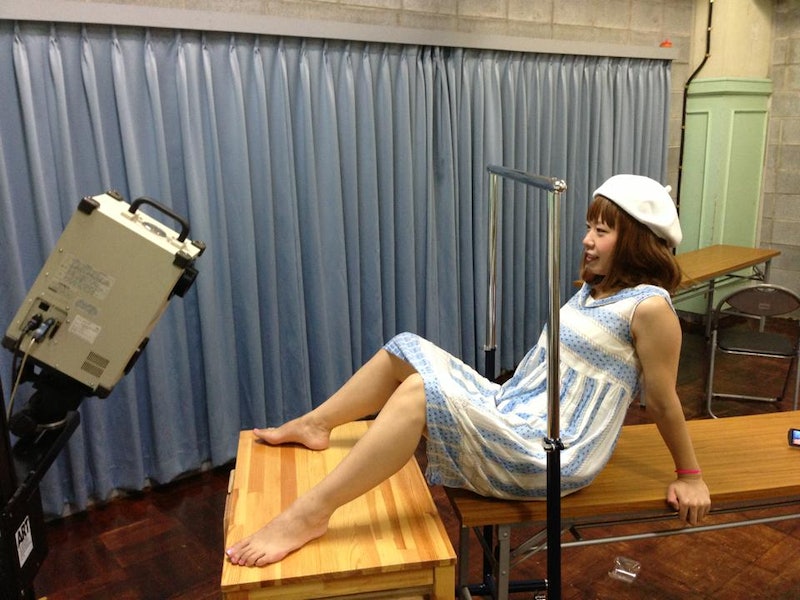 There's something about lady parts that make people go completely and utterly bonkers. Take, for example, the American exchange student who got himself stuck in a statue of a vagina and had to be rescued by German firemen. Or the time when Courtney Love tweeted at Lana Del Rey about her vagina and Twitter lost its collective head. Now, joining its bizarre-vagina-stories brethren, comes the tale of Megumi Igarashi, a Japanese artist who has been arrested for her genitalia-related artwork.

Igarashi scanned her own vagina and then distributed the data, allowing people to make a 3-D mold of her vagina (or, to be anatomically correct: her vulva and labia, since the vagina is the internal bit that leads from the vulva to the cervix). This breaks Japanese obscenity laws, which do not allow the distribution of images depicting male or female genitalia. Igarashi, who goes by the name of Rokudenashiko (roughly meaning good-for-nothing girl), is now in police custody.

Vaginas are the central theme in Igarashi's artwork, which explores taboos against, and reactions to, her own nether lips. She believes that female genitalia is "overly hidden" in Japan and wrote that she wasn't even sure that hers was normal, since she had never seen other examples. In response to those questions, she began creating dioramas out of molds of her vagina. "Decoman," the series of artwork that resulted, is a portmanteau of "decoration" and "manko," the Japanese word for vagina. Below is a warfare scene enacted over a vagina-shaped trench, and a vagina-adorned iPhone cover:

After Igarashi was invited onto a TV show to discuss her artwork but was not allowed to say the word manko, she wanted to try her hand at making even bigger vagina art, such as vagina cars, vagina doors, and vagina boats. That last idea spawned her "Peach on the Beach" campaign: an effort to create a kayak inspired by the shape of her own vagina.

Normal molds wouldn't cut it here, for obvious reasons, so she turned to scanning her lady bits. She sent those scans as a gift to people who contributed a certain amount of money to her crowd-funding project, and that's when the Japanese authorities stepped in. Japan is quite strict when it comes to depictions of female genitalia, but not its male counterpart — there is an annual penis festival called Kanamara Matsuri, and from what I can tell, it exhibits phallic imagery on a way bigger scale than what Igarashi's attempting.

There's already a petition on the Japanese version of Change.org asking for Igarashi's release. I had to put my Google Translate goggles on because I, you know, don't speak Japanese, so most of it came across as nonsense (thanks a lot, GT). However, I can tell you that it's received nearly 10,000 signatures already.

I never thought I'd be writing about vagina boats, but I gotta say, I'd buy one in a heartbeat if I had the chance. I hope the Japanese authorities will reconsider their decision, since Igarashi has spoken about, and written of, the purpose behind her artwork so intelligently. Demystifying the vagina is a phenomenal goal, and as long as she's not hurting anybody, she should be allowed to produce vagina products to her heart's content.

You can watch the video from her crowd-funding project below (it has subtitles in English):

More like this
12 Aphrodisiac Desserts To Spice Up Your Valentine’s Day
By Kaitlyn Wylde
25 Inspiring Quotes From Black Women To Celebrate Black History Month
By Kyli Rodriguez-Cayro and JR Thorpe
25 Galentine's Day Games To Play On Zoom With Your Long-Distance Besties
By Mia Mercado
21 Galentine’s Day Memes To Celebrate Your Best Friends
By Meghan Bassett and Mia Mercado
Get Even More From Bustle — Sign Up For The Newsletter
From hair trends to relationship advice, our daily newsletter has everything you need to sound like a person who’s on TikTok, even if you aren’t.