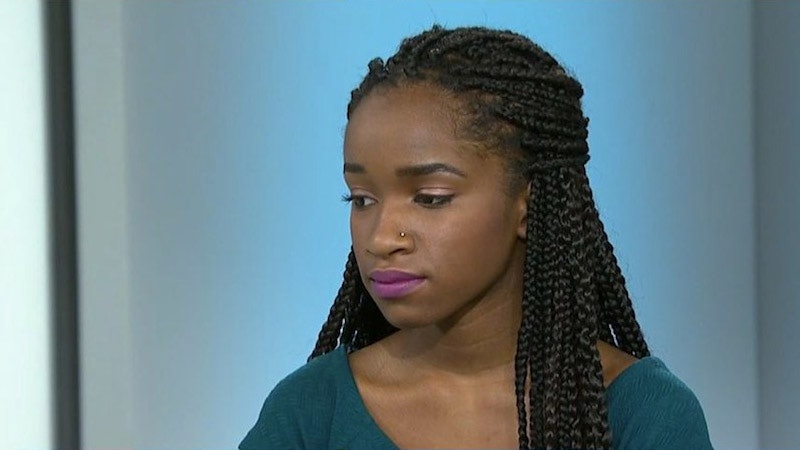 Rape has gone viral in our country. No one knows the ramifications of sharing photos and videos of an assault online better than 16-year-old Jada, a young woman from Houston who was says she was drugged and raped at a party last month. Jada didn't find out about her alleged assault until last week, when pictures of her surfaced on social medi a .

Jada’s alleged assault happened at a high school house party, where she says she was offered a drink. She doesn’t remember what happened after she took the drink — suggesting that it may have been laced with a drug — and only knows that she came home hours later with her underwear on backwards. Her worst fears were confirmed when she saw images online of her unconscious body on the Internet, lying naked on the ground.

In an interview with KHOU11 News, Jada described the incident from her perspective: "I had no control to say no. I didn’t tell anyone to take my clothes off and do what they did to me."

Jada’s words — and the photos themselves — leave little room for doubt as to what happened to her. But social media told a completely different story. Tweets from Jada’s accused assailant — which have since been deleted — argued that no crime had been committed:

HOW ITS RAPE? YOU HAD 2 MONTHS TO SAY SOMETHING BUT YOU AINT SAY SHIT TILL YOU GET EXPOSED?

Equally disturbing was the mockery of her alleged assault itself. Within 24 hours, a new hashtag had begun trending in the Houston area: #Jadapose, an Internet meme that includes pictures and Vine videos of people mimicking Jada’s unconscious body.

Putting aside the fact that distributing naked photos of a minor constitutes child pornography, there’s a much deeper problem at play here: People don’t seem to know what rape and sexual assault actually are, and they don’t seem to be taking them seriously as crimes.

Like so many other survivors, my own experience of reporting assault to local law enforcement ended in fear, helplessness, and continued victim-blaming. During my attack, I saw the bystander effect firsthand, as people who could have intervened — or at the very least, reported the assault after witnessing it — stood by and did nothing.

Sexual violence knows no race, age, or gender — and yet we continue to ignore it as a pressing issue. Instead, we blame survivors in an attempt to convince them that they could have avoided their attack — or worse, that they somehow caused their own assault. We live in a world that tolerates, normalizes, and even excuses forms of sexual violence; where rape culture is commonplace, and where a rape survivor can become a hashtag.

Of course, this isn’t the first time that rape culture has met the Internet. It was just over a year ago that the small Ohio town of Steubenville was making headlines for a high-profile sexual assault. In that case, too, social media was a key tool, eventually providing evidence that proved a lack of consent and helped in prosecuting the two boys accused of raping a teenage girl. Similar to what happened in Houston, people initially mocked the victim, referring to her as “the dead girl” and tweeting that if they "don't resist then to me it's not rape."

For another example of how rape culture plays out on Twitter, just look at the language around the recent FIFA World Cup. When Brazil lost to Germany 7-1 in the semifinals, it became the most-discussed sports event ever on Twitter, generating 35.6 million tweets. People all over the world were talking about this unprecedented game. But even more unprecedented was the sheer number of tweets that joked about Brazil being “raped” by Germany. Indeed, since last week’s match, over 9,000 tweets have included the terms “rape” and “Brazil” together.

As Belen Fernandez of Al Jazeera explains of rape rhetoric,

Okay, maybe it's not politically correct, you say, but it's just a game.

Exactly. And the fact that it is just a game further trivialises the trauma of people who've been on the receiving end of real-life rape.

The widespread deployment of rape lingo and the portrayal of a fundamentally vile phenomenon in a positive light also contribute to the perpetuation of societies in which violence - both sexual and otherwise - is normalised and glorified.

The Rape, Abuse, and National Incest Network (RAINN) estimates that of the few rapes that are actually reported to the police, only three percent of rapists serve a day in prison. An estimated 60 percent of rapes remain unreported in the United States. Even though it's been used repeatedly to perpetuate rape culture, social media is only partly at fault. The rape culture narrative exists outside of these many, many cases of rape gone viral. Clearly, the fear of not being taking seriously as a victim runs deep.

If we want to change the way sexual assault and rape are handled in our society, we have to work on rape culture first. Perhaps that means redefining what sexual violence looks like, so that there is no question of what constitutes consent. Or maybe that means starting in schools by emphasizing that rape is heinous crime with consequences — and then actually following through by enforcing those criminal consequences on high school and college campuses.

We must also change the way that we cover sexual violence in the media. Take a look at coverage of sexual assault on cable news networks, and you'll see the mainstream media sympathizing with assailants and sometimes even blaming and questioning the victim. Even the women of The View were guilty of this in their botched interview with Jada this week, suggesting that parents should "have a conversation with their kids" and that Jada should "stay offline" — as if having a simple chat with your teenager and limiting their computer time are the solutions to this problem. It's no wonder that reporting rates are so low.

Like so many other survivors, my own experience of reporting assault to local law enforcement ended in fear, helplessness, and continued victim-blaming. During my attack, I saw the bystander effect firsthand, as people who could have intervened — or at the very least, reported the assault after witnessing it — stood by and did nothing. (And my assault wasn't even sexual.) I think of these people passing me by when I witness bystanders on social media who joke about these crimes, instead of condemning them or reporting them to the police.

Disturbing Twitter trends like #jadapose are red flags indicating that the way that we talk about rape desperately needs to change. The nonchalant attitudes that we see on social networking websites should be read as warnings, and the mass consumption of social media ought to be used to catalyze change.

Indeed, that's exactly what has been happening in the wake of Jada's assault. Outraged Twitter users across the country have flipped the the #Jadapose hashtag, and social media is being used as a tool to reclaim Jada's narrative with hashtags such as #IamJada, #Jadacounterpose, and #StandWithJada.

If social media is a large part of the problem, then it also follows that it could be a large part of the solution. There’s no denying the fact that rape culture has invariably made its way online. The question now, though, is how many more hashtags it will take for us to do something to change it.