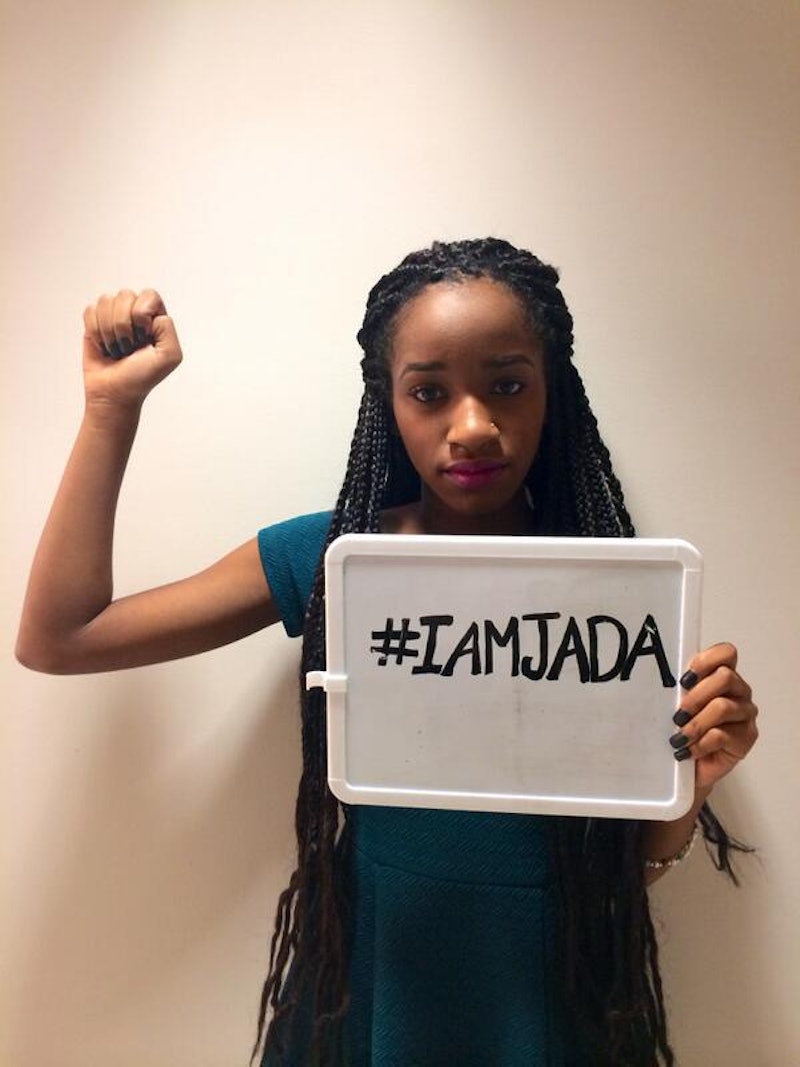 Stories about young girls who are raped and then mocked online don't surprise us anymore. That's because it's so commonplace: just take the Steubenville rape case, for example, or the Maryville rape case. The nature of social media means that repugnant mockery of survivors becomes easy. At first, it seemed as if the story of Jada, a 16-year-old who was raped at a party in Houston, would go the same route. But thanks to the rallying cries of #IamJada from supporters on Twitter, Facebook, and other social media platforms, people the world over are stepping up in support of Jada's bravery.

First, a quick recap of Jada's ordeal and decision to come forward: A few weeks ago, she went to a party and was handed a drink that was allegedly drugged — she remembers nothing after that point. When she got home, she realized her underwear was on backward. She asked her friends, but they told her not to worry about it. It was only weeks later, when photos showing her naked from the waist down began circulating online, that she realized what had happened. Photos with the hashtag #jadapose, which showed people imitating her body's contorted pose in these pictures, began showing up on Twitter and Instagram.

However, instead of sweeping the pain and shame caused by the incident under the rug, Jada made an incredible decision: she shared her story. Since another girl was apparently raped at the same party, her choice is timely and brave. Although The View seriously mishandled an interview with her, coming off as less than supportive, MSNBC's Ronan Farrow interviewed Jada and her father in a more balanced and considerate way. He then called for action in the video below:

Farrow's interview helped kick off a social media counterstrike, in which people shared their support and admiration for Jada with hashtags like #IAMJADA and #jadacounterpose. Now most of the original, harmful pictures are gone, and these are the kinds of images that have replaced them:

All Jada's supporters seem clear on one thing — this is the real #jadapose:

If you have a Twitter or Instagram, you can upload your own #IAMJADA photos to show your support for her cause. Hopefully, the increase in media attention will serve as a kick in the butt of the Houston Police Department so that they can investigate the details of Jada's case and bring her justice.