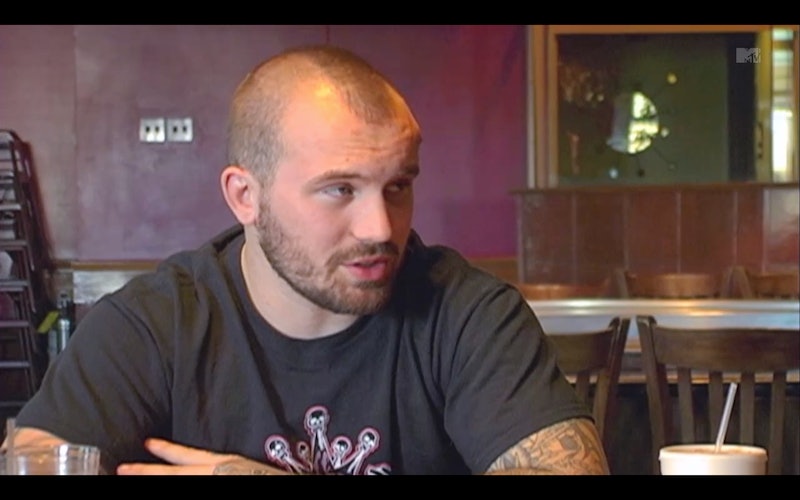 As if the upcoming return of Teen Mom 2 's fifth season didn't already promise more than enough drama, star Adam Lind was arrested and held for several days at the end of June. The ex-boyfriend of Chelsea Houska and father of their 4-year-old daughter Aubree was arrested on June 28 for violating his court-ordered 24/7 Program, a rehabilitation for repeat DUI offenders which requires daily blood tests for alcohol. If a test is missed or alcohol is found in the blood, the subject gets a short jail sentence. This follows Adam's May 2014 arrest for driving with a suspended license and three DUI arrests over the past several years. And if that's not enough to start drama between Adam and Chelsea, he also has a new girlfriend, which is almost guaranteed to cause some fights.

The saddest part? Adam was actually scheduled for his monthly visit with Aubree on the day of his arrest. Teen Mom 2 fans will remember almost the exact same thing happened to Adam and Chelsea on the show before, when he was arrested for driving without a license while Aubree was at his parents' house. Chelsea hasn't mentioned Lind's arrest in a statement or on any of her social media accounts, which are exclusively devoted to showing how cute and well-dressed Aubree is, not commenting on her ex.

With a kid as smart as Aubree and an actual career as an esthetician, it's no surprise that most of Chelsea's Season 5B drama looks like it will revolve around Adam. He even says in the trailer, "getting a DUI has nothing to do with parenting!" That explains a LOT about his current situation.

Adam also has a second daughter, Paislee, with Taylor Halbur. Taylor didn’t comment directly on Adam's arrest either, but after the news broke, she posted this message on Instagram, which could be a reference to their ill-fated relationship.

Even though their daughters are half-sisters, Chelsea and Taylor don't speak, as revealed in the Season 5 reunion special, because of love triangle drama. Adam, initially with Chelsea, left her for Taylor. They broke up, and Chelsea and Adam briefly reconnected. Adam then left both women, only to reunite with Taylor around the time she gave birth to Paislee, then nine on-and-off months later, they split and he met his current girlfriend, Jessica Nicole. Exhausting, especially when mentally adding in his many arrests and DUI convictions.

Adam recently moved in with Jessica, mere weeks before the arrest. While both Adam and Jessica have deleted their Instagram and Twitter accounts, Jessica posted a photo on Facebook with her and Adam at Mount Rushmore on July 6, after Adam was released from his stay in jail.

The couple look happy and hopefully Adam will stick to the program and put a stop to his many driving violations so if he's ever back in his daughters’ lives, he can do so responsibly. Until this incident, he had been sober for nine months.

Adam is obviously no longer behind bars, and as long as he is able to adhere to the 24/7 Program, he shouldn't face any more jail time. But as anyone who's seen a single episode of Teen Mom 2 could tell you, arrests seem to follow Adam wherever he goes. Hopefully he'll have better luck this time… but we won't be holding our breath.

More like this
We’ve Got A Text! Another 'Love Island' Series Is On The Way
By Darshita Goyal
What To Know About Simon Guobadia’s 3 Ex-Wives & Children
By Brad Witter
Watch The Gripping First Trailer For The 'Harry & Meghan' Netflix Doc
By Jake Viswanath
Meghan Markle Just Addressed *Those* Wild 'Real Housewives' Rumours
By Sophie McEvoy
Get Even More From Bustle — Sign Up For The Newsletter