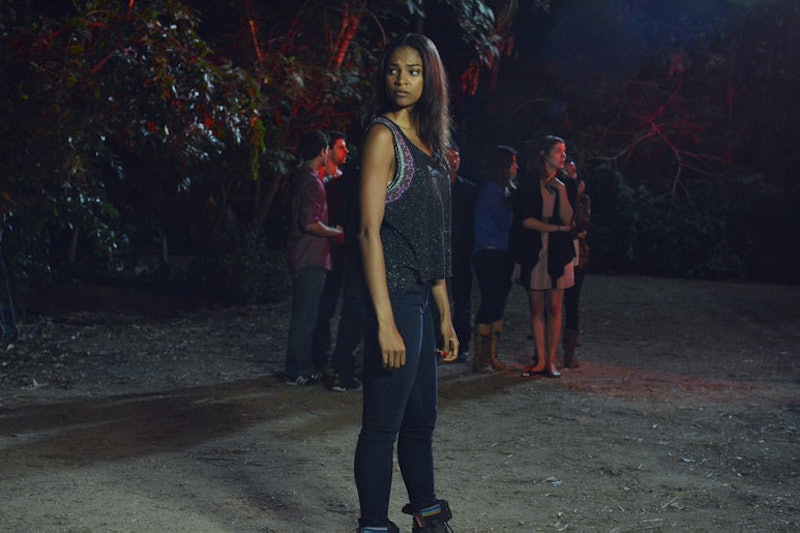 We rejoin Mona in the police station, where she claims that she snuck out of Radley and killed Detective Wilden in self-defense. Our prettiest, littlest liar delivers a captivating performance, tears streaming down her face without streaking her considerable mascara. Is this episode sponsored by Maybelline?

Though Mrs. Hastings points out that Mona's statement contradicts the evidence, it nevertheless convinces the judge to finally set bail for Ashley Marin... at a whopping one-million dollars. Fortunately, Hanna's generally useless dad (and his checkbook) come to the rescue, posting the sum anonymously. And so, at long last, Mama Marin is home! Home, and nowhere else, considering she's under house arrest.

But it's not so bad. Pastor Ted drops by with pie and sweet talk. Ashley spills on her history with Wilden, including the fact that they'd argued on the night he was murdered. Pastor Ted takes all this in stride: "Don't run. I've got a lot riding on you." What a dude.

Aria and Jake aren't dating, but they are? Kind of? But not really? Modern love, you guys! Jake stays the night—on the couch—and she revels in his shirtlessness—from a distance. Ezra, having coffee with his baby mama, is so distracted by the sight of the non-couple that he almost doesn't hear Maggie say that she (and Malcolm) will be moving across the country to attend grad school. Mrs. Hastings—PLL's friendly neighborhood source of legal exposition—doesn't like his chances in the potential custody battle.

As a birthday gift, Paige schedules Emily a session with a swimming trainer in Philly, encouraging her GF to take a year off from school to get back into competitive shape. Em's undaunted by the uncomfortably intense coach, who works out his pupils six days a week and monitors their sleep and diets. He's interested in recruiting her... until he finds out about her injury, which Paige neglected to mention.

Spencer and Aria overhear Shauna and Jenna, who's tragically losing her sight again (you know, because, medical science), saying something about Alison. But what? The Liars decide to use Emily's surprise party as an excuse to snoop on their nemeses.

Before they can dig up anything good, Jake shows up with a date. She's tall! Blonde! With thin eyebrows! The anti-Aria. But she's not jealous. Nope. Not even a little bit. Why? Why would you even ask that?

Still smarting from her rude awakening in Philly, Emily finds herself questioning her relationship. She realizes that Paige is pushing her so hard out of fear that they won't go to college together. The girls tearfully acknowledge that a post-graduation breakup is probably inevitable.

This, again, is all happening at Emily's birthday party. Woohoo, time for cake!

Outside the party, an unconscious Jenna is found floating facedown in a stream. She's bleeding from a gash in the back of her head, meaning she probably didn't just take an Ophelia-style tumble into the water. Ain't no party like a PLL party 'cause a PLL party don't end. I mean, it does end, in serious injury and/or arrests. At the hospital, Spencer asks Shauna—who insists that Ali is dead—who it is that Jenna's really afraid of. It's none other than CeCe Drake.

Hold on... it wasn't Hanna's dad who posted bail after all. It was Pastor Ted. Hashtag marriage material? Released by the cops herself, Mona checks into Radley, and seems weirdly pleased to be back. Red Coat creeps around somebody's front yard. The game's afoot.

Until next time, bitches. Xoxoxo.

Too-hot-for-ABC Family moment of the week: Someone tries to make a bong out of Paige's aunt's teapot. REEFER MADNESS?