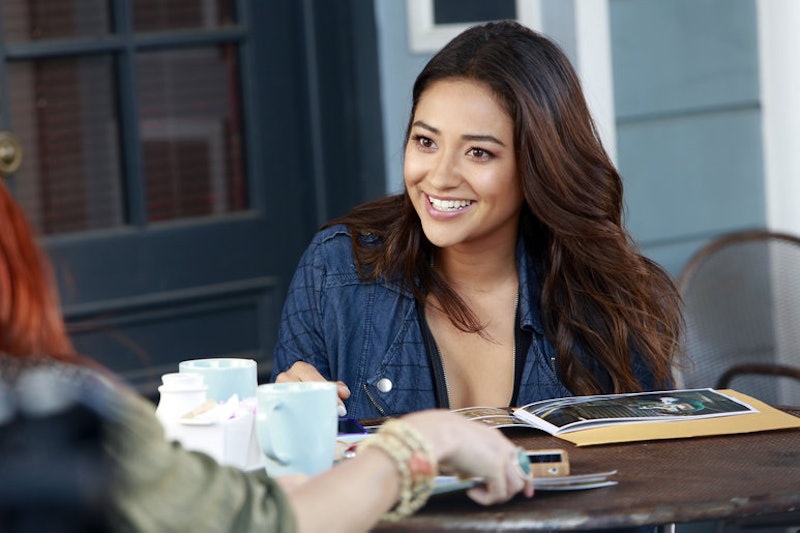 Emily and her mother are holed up in a motel room post-carpocalypse. "Is there a chance this really was an accident?" Aria asks. Uh, do you not realize that you're on Pretty Little Liars, lady? A glare from Spencer quickly sets her straight.

Mrs. Hastings brings bad news. The judge has refused to grant Ashley Marin bail—and she'll be transferred to a state prison until her trial. At least she can make friends with Taystee?

Aria discovers that her sketchier-than-ever little brother Mike has been taking martial arts classes with Jake, that guy who was almost kind of her boyfriend, but not really. To be fair, I'm sure that description could apply to at least ten different characters in the PLL canon. She learns from Jake, who has the most beautiful, masculine nose I've ever seen (trust me), that Mike may be the target of bullying by his teammates.

Aria frets over Mike's well-being while he's out at a party. She calls Jake over to her house in case he needs help. He doesn't. "Honestly, I'm more worried about you," Jake tells her. The [non-]couple spend the night in front of the TV together. They watch a trailer for Insidious 2, make plans to go see Insidious 2... in a episode sponsored by Insidious 2, between commercial breaks filled with ads for Insidious 2. Mmk.

Spencer finds her mom's hot law school intern, working the Wilden/Marin case, hanging around their house with boxes of paperwork relating to the late detective. She visits Radley to confront orderly Eddie Lamb about Mrs. Cavanaugh's death (which, with every passing week, looks less and less like a suicide). She's discovered a discrepancy between Lamb's statement in an interview with Wilden and the detective's official police account—did Toby's mother jump to her death from a window, or from the roof?

As he helps her prepare her college applications, Mr. Fitz encourages Em to contact her supervisor, Zoe, from her stint with Habitat for Humanity in Haiti last summer. Zoe (Rumer Willis, y'all!) agrees to meet her for coffee. Besides offering to write her a "glowing" recommendation, she totally flirts with her, inviting her to join the group's next volunteer trip to Nicaragua. Go for it, Fields; get that Bruce and Demi money.

Operating on the assumption that, as a juvenile, she'd receive gentler treatment than her mother, Hanna decides to confess to Wilden's murder. Before she does, she turns to... Mona! Why Mona? Her relevant expertise: "We all tell lies, but you're the only one who knows how to live in a lie." Why, she's the prettiest, littlest liar of them all. Under Mona's tutelage, Hanna hones her story and practices holding up under interrogation. Fortunately, Ashley senses that her daughter's about to do something rash, and she dispatches Caleb to talk her out of it. So, Hanna doesn't turn herself in.

But Mona confesses instead (?!?!?!). Did she really kill Wilden? Is she just trying to protect the Marins? Or is this another kind of power play altogether? Only one thing is clear: I love this woman.

Fashion crisis of the week: Aria wears a long-sleeve ruffle-shoulder comic strip-print dress with a plunging neckline. Actually, I kind of dig it. I don't know. It's complicated.

More like this
Everything To Know About The 'Pretty Little Liars' Reboot On HBO Max
By Mary Kate McGrath and Jack Irvin
What’s New On Netflix: 'Stranger Things' & 'Mean Girls'
By Arya Roshanian
At 14, Kate Berlant Had A Wheelie Backpack & One Line In 'Lizzie McGuire'
By Samantha Rollins
James Marsden Kept Teddy’s Westworld Season 4 Return A Secret “For Years”
By Brad Witter
Get Even More From Bustle — Sign Up For The Newsletter