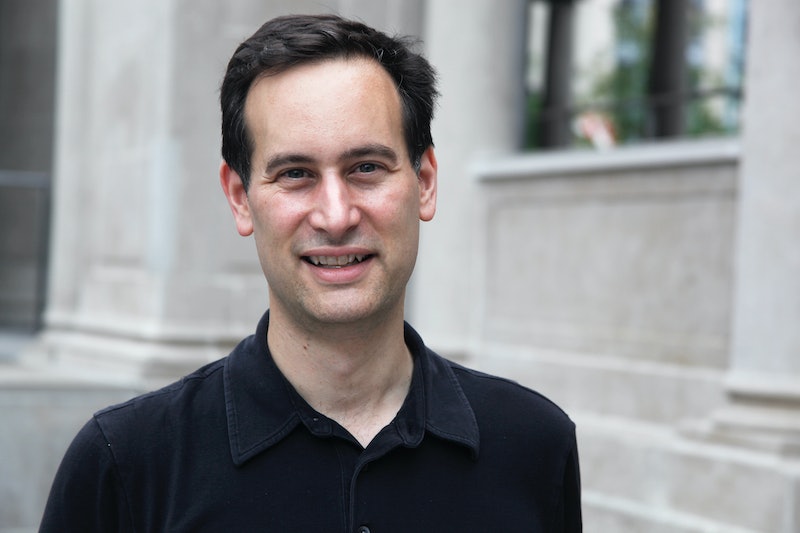 David Levithan must have heard fans shouting for more Tiny Cooper, because on Thursday, publisher Dutton Children’s announced that the beloved author is releasing a spin-off of Will Grayson, Will Grayson starring everyone's favorite character.

The spin-off novel, called Hold Me Closer: The Tiny Cooper Story, is set to release in March 2015 to coincide with the fifth anniversary of Will Grayson, Will Grayson, Levithan's novel he wrote with YA king John Green. Even better, it's going to be a musical novel. Tiny Cooper is Green's creation, but he gave Levithan his blessing to build a new novel around the character.

For those YA readers who are behind, let's catch you up on the magical character of Tiny Cooper, his origins in the Levithan-Green novel, and why you should be very, very excited.

So what was this novel about, again?

Will Grayson, Will Grayson centers on two teenage boys named, yes: Will Grayson. The two very different Wills (one whose name is always capitalized, one whose never is) cross paths on a corner in Chicago, and their lives are forever changed for it.

Will Grayson of the odd-numbered chapters, written by Green, is just trying to get by without drawing too much attention to himself. He's obsessed with the band Neutral Milk Hotel and a girl named Jane Turner.

Lowercase will grayson of the even-numbered chapters, written by Levithan, is having an online relationship with someone named Issac, whom he is intent on meeting up with so he can find something to hold onto in this world. But, as is the case with the Internet, Issac isn't who he says he is.

These facts about the two Wills bring them to a collision and intertwine their lives, changing both of their futures.

We know the Will Graysons, but who exactly is Tiny Cooper?

Tiny Cooper is Green's Will Grayson's best friend, who also ends up close with will grayson once the two Wills meet.

And why should we be excited about Tiny Cooper's staring role?

Well, I'll tell you. It's because Tiny Cooper is the best.

And there are four more specific reasons:

1. Tiny Cooper is a well-drawn, compelling, hilarious, [insert all adjectives] star of a character

In the novel, he is also described perfectly as "a fairy-tale giant." Tiny is a bit of a drama queen, but he's dedicated and he's got a big heart. He really cares about his friends. Green said on his website that, "I think you could certainly make the case that Tiny Cooper is the protagonist of the novel." It also must be noted that as a gay character, he really gets to shine as someone who has a personality outside of his sexual orientation — which, unfortunately is not always the case, even today.

Did I mention that Tiny Cooper is writing a musical about his life during Will Grayson, Will Grayson? Because he is. And this spin-off novel will be that musical, of the same title. Levithan explains how the novel will be created, stage directions and all:

Basically, it is as it would be produced, but obviously, Tiny being who he is, is a little more long-winded with the stage directions and the background material than perhaps Tony Kushner is. So you get some of the story from the directions Tiny is giving about how to portray his own childhood and adolescence.

3. Levithan is renowned for LGBTQ-friendly lit

There should be no worries about leaving Tiny is Levithan's capable hands. And it's exciting to add more LGBTQ characters into the YA mainstream canon. Levithan has previously written Two Boys Kissing and Boy Meets Boy , both of which are just flooded with awards, including a National Book Award Nominee for Young People’s Literature, a Lambda Literary Award and a YALSA Best Book for Young Adults, and a Stonewall Children's and Young Adult Literature Award honor. Basically, Levithan knows what he's doing, and we won't have to worry about any cardboard characters in his pages.

4. Here's a little taste of the musical, via Levithan himself

I can give away that the finale of the first act is a trio with Tiny, his lesbian babysitter, and the ghost of Oscar Wilde. That pretty much sums up where Tiny is coming from and by extension, where I’m coming from.

If this is any indication, the book is going to be totally crazy and totally epic.

But let's let Twitter show the excitement for the news.

Couldn't have said it better myself.