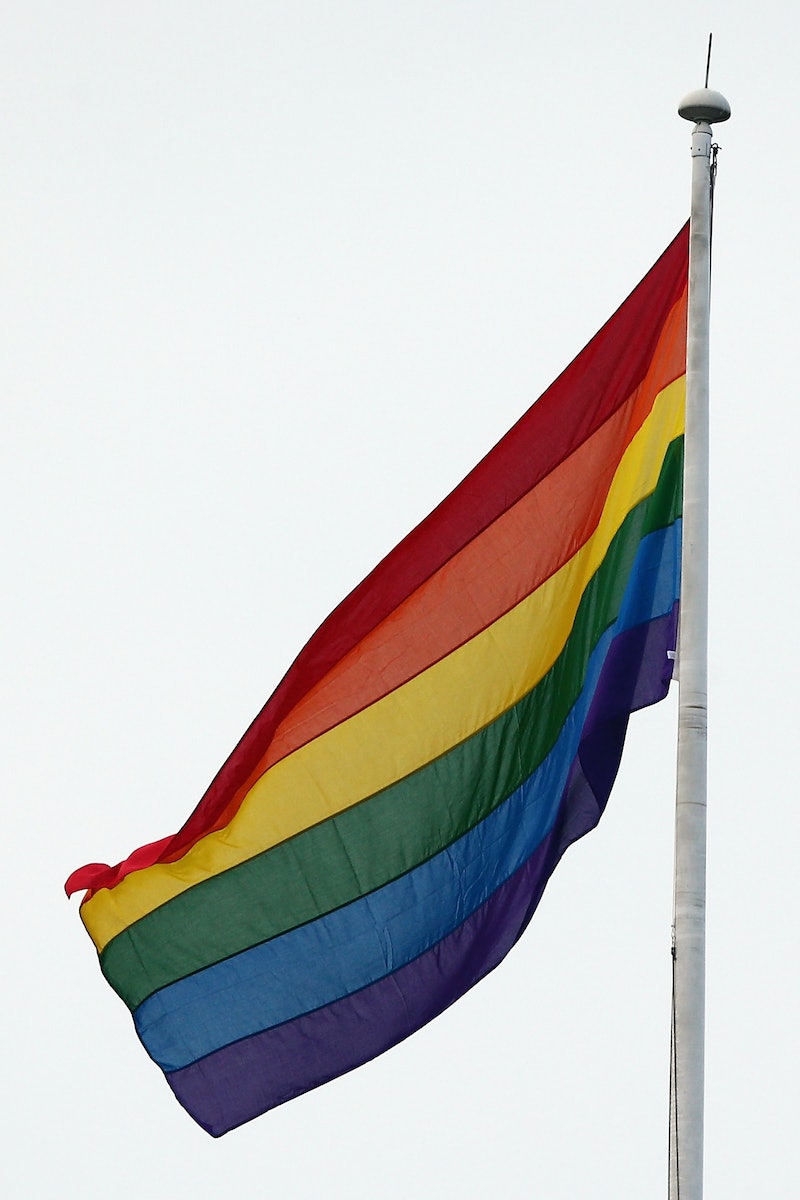 On March 6, the finalists for the 26th annual Lambda Literary Awards were announced, and they set records for the number of LGBTQ books submitted. The Lambda awards, or "Lammys," include several categories all geared toward rewarding new books that explore LGBTQ themes or characters. This year, the finalists were chosen from a selection of 746 submissions from 352 publishers — a Lammy record, and up from 2012, which had 687 and 332, respectively. These awards, along with other recent award nods may suggest a changing tide for LGBTQ lit, finally finding a strong foothold in the mainstream fiction and nonfiction YA marketplace. But the numbers may not be as clear as they seem.

According to the website GayYA, 5-6 percent of American teens identify as gay, lesbian, or bisexual, and 80 percent know someone who does. However, the overall representation in publishing may not reach those percentages.

Let's look at the 2013 finalists for the Lambda Literary Awards in the Childrens/Young Adult category, which show some familiar titles and authors, as well as major publishing houses:

Federle's children's book Better Nate Than Ever has been a critical darling this award season, also winning a Rainbow Project award, given by a joint committee between the GLBT-RT and Social Responsibilities (SRRT) Round Tables of the American Library Association; a Odyssey Honor Award for audiobook; a Stonewall Honor Book in Children’s and Young Adult Literature; was named to best book of the year lists for Publishers Weekly, Slate, and others; and was a New York Times Notable book. Esteemed YA author David Levithan, who is on the list above, was also honored with a Stonewall award for his novel Two Boys Kissing.

But while LGBTQ-focused novels are winning LGBTQ-focused awards, are they getting the attention of mainstream award committees and audiences? They should be, but the numbers are confusing.

This year, Midwinterblood, by Marcus Sedgwick, won the Printz Award, and though it doesn't focus on LGBTQ characters, it does contain a relationship between two women in its exploration of love.

Along with the rising numbers of submissions for the Lambda awards from mainstream publishers, Malinda Lo, author of many books, including 2012's Adaptation , researched overall LGBTQ YA novels published in a given year. Lo found that while the overall numbers of LGBTQ-friendly young adult lit continues a steady increase over the years, that increase seems solely focused on niche, LGBTQ publishers. Of the 94 YA books she counted in 2013, only 29 of them were from the "Big 5" publishing houses. This is a decline from 2012.

However, this number again becomes muddied by increasing gay and lesbian characters in non-LGBTQ titles, such as the extremely successful Mortal Instruments series by Cassandra Clare, and the changing role these characters play in YA lit. There has been a marked rise, some industry experts say, in YA novels with LGBTQ main characters in which their sexuality plays a subtle if not nonexistent role in the book's plot. This allows these characters to transcend being defined by their sexuality and makes them just who they are, which is an advancement in its own right.

In a piece by Jen Doll last year in The Wire, David Leviathan, who has written many LGBTQ characters into his own books, addresses this sea change:

"For so many years, so many characters have been defined by their sexuality — they're 'gay'; we don't have to give them any other characteristics," he says. "But gay characters and gay kids have lots of other things going on. No one is just this one thing."

"We're light years away from the mincing queen sidekick, the sassy best friend doing quippy one-liners. We went through that phase. We have to continue to look at it from all these different angles, to see how the one identity of being gay intersects with other identities."

Clearly we are making inroads in LGBTQ representation and mainstream success, but there is still a way to go to match where it should be.

Okay, so we're not all in major publishing houses or award committees, so what can we do to support the rise of LGBTQ literature in the mainstream? We can start by buying the books. And, luckily, there are many promising 2014 titles to consider, including these five:

Grasshopper Jungle is ostensibly an apocalypse novel, but it's unlike any apocalypse novel out there. There are giant preying mantises, sure, but Smith's novel's weirdness and humor doesn't at all detract from its heart and and honesty. Sex-obsessed, Polish-Iowan sophomore Austin really wants to get it on with his girlfriend, but he finds himself equally attracted to his best friend Robby, who happens to be gay.

'Beyond Magenta: Transgender Teens Speak Out' by Susan Kuklin

Kuklin's powerful book Beyond Magenta is told through the viewpoint of six, diverse transgender teens, giving a revealing look into the teens' lifes pre- and post-op and the issues they faced, from family relationships, to pronoun usage, to shopping for clothes. Through its narrow scope, focusing on just these few people, Kuklin illuminates many personal experiences from members of the trans* community.

Fu's debut novel centers on Peter, who has always been drawn to more traditionally "female" roles. However, Peter is blocked from becoming who he wants to be by his tough, Chinese immigrant father. This rejection sends Peter down a spiraling path, but the novel about gender and the search for identity is ultimately about the power of discovering who you really are.

'Changers Book One: Drew' by T. Cooper and Allison Glock

In a starred review, Publishers Weekly called Changers Book One "a thought-provoking exploration of identity, gender, and sexuality, an excellent read for any teens questioning their sense of self or gender." Changers are an ancient race, who wake up each year of their high school as a different person, and a different gender. But post-graduation, they have to choose. And that decision is final.

'Moon at Nine' by Deborah Ellis

In 1998 Tehran, homosexuality is punishable by death. But in Moon at Nine , which is based on a true story, Farrin meets a girl named Sadira, and she has to figure out if she's willing to give up literally everything for the person she loves.

'Something Real' by Heather Demetrios

In Something Real, Bonnie Baker and her family of 12 siblings grew up on a reality show called "Baker's Dozen," but it was recently cancelled amid scandal. The story follows Bonnie as she attempts to have a "real" life out of the spotlight, but her mother (a Kris Jenner character, perhaps?) won't allow it. While the plot isn't LGBTQ-focused, Bonnie's older brother Benton is gay and in a healthy, stable relationship with his boyfriend Matt, a football player. The portrayal of Benton and Matt seems like just what Leviathan was talking about.