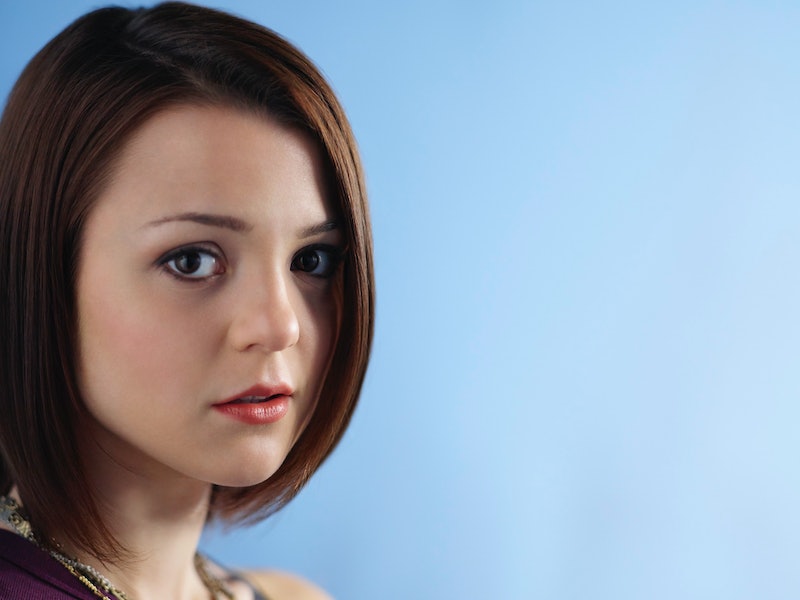 I predicted months ago that MTV's juicy summer drama Finding Carter would become my new television obsession, and it turns out, I was right — I'm hooked on the kidnapping drama. Unfortunately, there's one thing that I still can't get behind when it comes to Finding Carter, and that's the titular character herself. Actress Kathryn Prescott (the much-beloved Emily Fitch from Skins!) is awesome, but Carter herself? She's the absolute worst.

I've speculated before on how Carter's bad attitude, unnecessary rebellions, and overall whiny teenager BS might pay off. Carter clearly hasn't processed her kidnapping and has refused to see her biological parent's side of the story, instead insisting that Elizabeth, her mother, has taken her away from the only "good" parent she ever knew. Carter's reluctance to bond with her mother has made Carter come off as cold and unfeeling (a hard thing to do given that Carter's bio-mom is hardly warm and fuzzy). It's no wonder that fans are having trouble deciding whether Carter is a character they should sympathize with — after all, if she can barely muster up an ounce of sympathy for the parents who thought she was dead for 13 years, why should we care that she was taken away from her "super great" kidnapper?

The first two episodes of Finding Carter (the second episode was aired immediately after the pilot) definitely didn't make fans of the show cry "Team Carter," but last week's episode "Drive" did show that Carter was completely incapable of change. Well, sort of — for every step forward, Carter seems to take at least another step back.

Check out all of the things Carter did in last week's episode to determine if the pros outweigh the cons.

+ Carter goes to the police station to apologize to the police officers she pranked in the previous episode during what I am now calling "Foam Finger-gate."

— Carter has eye sex with the (okay, but like, really, really hot) drug dealer her bio-mom Elizabeth is arresting.

— Carter finds a loophole and brings her (totally sketchy) group of friends over... at exactly 10 p.m.

— Oh, and one of the friends is the sketchy (but again, so beautiful) drug dealer, Crash. (Assuming not his real name?)

+ Crash teaches Carter's 12-year-old brother to roll a joint, and Carter gets pissed. When Elizabeth kicks him out of the house, Carter agrees that he has to leave.

— Of course, because it's Carter and teenage rebellion is kind of her schtick, she doesn't stay on Elizabeth's side for very long. When Elizabeth insists Carter has nothing to do with Crash ever again, Carter grabs Crash's face and starts making out with him... in front of her entire family.

+ Carter stood up for Max when Elizabeth "kicked him out" of the house. Unfortunately, Carter found out later that this was part of Elizabeth's plan to ignite Carter's rebellious spirit so she'd date Max and not Crash. But still: Props for standing up for something actually worth standing up for.

— Carter gets in Crash's car even after learning he's less-than-reliable.

+ Carter gets out of the car when she finds out it's stolen.

+ Carter calls David to come pick her up and admits that she's completely at fault for trusting Crash. Taking responsibility FTW!

So, is Carter still the worst? She's certainly no bucket of sunshine and rainbows, but last episode did end on a positive note, even if it started with Carter being more obnoxious than ever. (Come on, making out with a drug dealer in front of your parents? Who are you, Marissa Cooper?)

Even though I'm not a huge fan of Carter herself, Finding Carter continues to intrigue me. Here's hoping that Carter has a few more pros in future episodes. We found Carter, so now let's have her find a heart.

More like this
'Succession' Season 4 Could Be The Show’s Last
By Kadin Burnett and Gabrielle Bondi
Everything To Know About The Bear Season 2
By Brad Witter
Where Was 'Only Murders In The Building' Filmed? The Arconia Has A Different Name IRL
By Radhika Menon
Winona Ryder’s Impact On The Set Of 'Stranger Things' Goes Beyond Just Her Acting
By Radhika Menon
Get Even More From Bustle — Sign Up For The Newsletter