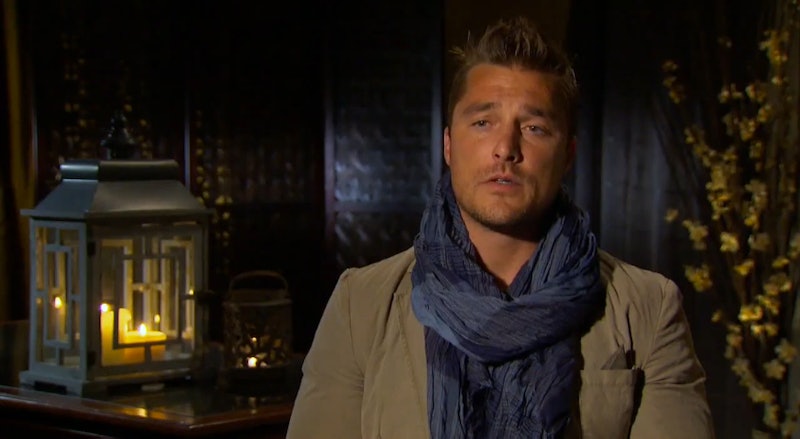 Even though The Bachelorette isn’t a show directly about fashion, I still enjoyed seeing Andi’s fashions as she traveled around the world looking for love. This season, Andi has had some competition for best dressed with the men vying for her heart, but what do you expect when one of the men is a “pantsapreneur”? But it wasn’t JJ O’Brien’s crazy pants that viewers are noticing this season, as much as it is the many scarves the men have been wearing this season. Seriously, what the hell is up with the scarf obsession on The Bachelorette?

If I had to guess what The Bachelorette packing list is, I would assume it looked a little something like this based on the fashions we’ve seen this season:

Okay, maybe 700 scarves is an exaggeration, but in almost every episode this far I think at least one of the guys has had a scarf on. Last week, when the final three went to the Dominican Republic, the scarves were left at home leading me to think the scarf obsession might have been more for utility? Perhaps Brussels is a really drafty city? Regardless, I don’t think there is a scarf left on Earth for the men to wear, but as farmer Chris might say, I don’t want to count my chickens before they hatch, in other words, I wouldn’t be surprised if they all showed up to The Bachelorette: The Men Tell All wearing one.

Here are the top five scarf moments during this season’s Bachelorette:

JJ O’Brien’s pants weren’t the only stars of this episode. After a rough week in Marseille, France with confrontations galore, the group of men and Andi were excited to travel to the beautiful city of Venice, Italy. Upon arrival (by boat... I can’t believe they actually traveled by boat) we were given this beautiful shot of JJ pondering his time on the journey of love with a multicolor scarf that matches his multicolor personality.

Another scarf stunner in Venice was courtesy of Nick, the King of Scarves. Nick and Andi’s insta-date — which started the moment the men disembarked off of their Venetian boat travels — started with the two enjoying the city as two tourists would. Andi, who hasn’t been shy about her chemistry with Nick, had some competition though, as the birds of Venice flocked (pun very much intended) to Nick and his scarf.

From here on out, Belgium should be known as Scarf Week on The Bachelorette. Chris totally gave me scarf envy with his perfect execution of the up-around-the-neck-and-down-the-front scarf. It looks plush, warm (which is always the second reason to wear a scarf, style being the first reason), and not too bulky (the worst). He gets the gold star for Belgium scarves.

While in Belgium, Nick’s ‘strategy’ came under fire as the men became fed up with his attitude. I don’t know if I need to explain that though, I think Marcus’ stare says it all. Props for the contrasting scarf color against the pink sweater. Seriously, could his blue eyes look any better? It doesn’t have the lushness that Chris’ scarf had, instead Marcus’ death stare scarf reads more "I did this for style" than "I did this for — a.k.a. the only reason I wear scarves.

Remember when Nick got Andi’s room number from the front desk of the Belgium hotel and they went on that mini-date around the city at night? Well, if the men didn’t like Nick before that, it sure didn’t help him in BFF status. Nick’s sneaky scarf let him pull off the front desk ruse meticulously, but doubled as a shield when the men questioned his arrogance upon his return to their hotel room post-date with Andi.

Let's hope Chris Harrison asks the guys what the story is with the season of scarves on The Men Tell All. Also, let's all agree that Josh Murray is allowed to wear scarves every damn day if he wears them like this.