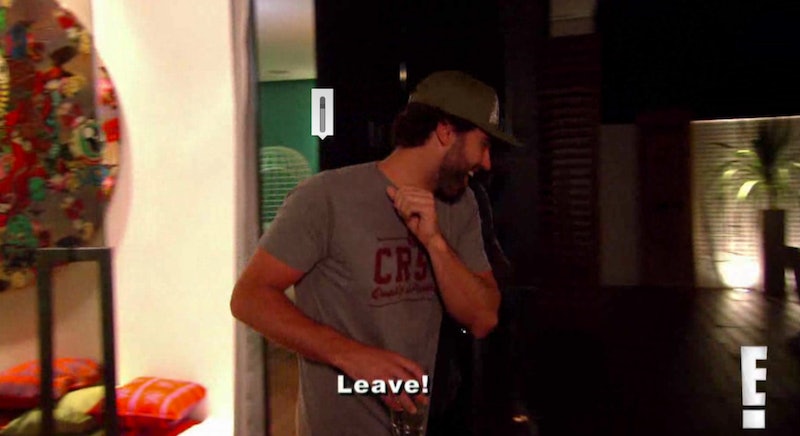 The three-part Kardashian summer EVENT hath begun. For the next few weeks, Keeping Up With the Kardashians will bring its audience along on the family’s trip to Thailand, and though I’d much rather be a part of the vacation IRL, this three-part special will do just fine. And hey, no vaccinations required! The excursion gets off to a rocky start: Kourtney Kardashian and her family back out of the vaycay at the last minute due to ear infections; Rob Kardashian goes MIA the morning of the flight, slides Khloe Kardashian's calls, and ditches the vaycay entirely; Khloe says she won't go on the vaycay without Rob; Kylie Jenner says she'll have an anxiety attack if Khloe doesn't go on the vaycay; Bruce and Kris Jenner fight like rabid raccoons with very different ideas as to what constitutes a great vaycay; and Kim Kardashian decides she'll spend the vaycay taking selfies for Kanye West.

To quote Khloe: “I don’t even know. I’m so over the fucking selfies."

While I watched the resort concierge show the family to their spectacular-is-an-understatement rooms (no seriously, what the fuck was that sponge-like moon floor in Kim's suite?), something hit me:

Brody Jenner fights a random while the family is in Thailand. Brody defends his sister's honor with his fists at a beachside bar. The season promo promised. It PROMISED. Is this the week?! Is this the week I've been waiting for?!?!

It is not the week I've been waiting for, for the fight does not happen this week. I must be patient. But do you know what DOES happen this week? Brody accidentally walks in on Kim while she's in the middle of an impromptu sexy photo shoot. (A sexy photo shoot on a family vaycay? Sure, why not? Ugh, I love Kim.) He tells Brandon and Leah Jenner about what he saw. He is very uncomfortable. Leah asks if Kim in a see-through dress turned him on. (Oh god, you KNOW Brody and Brandon have fielded questions about their super hot stepsisters as long as they've been stepsiblings. Shouldn't he have a canned answer by now?) A frazzled Brody could've dismissed this, but he doesn't. Instead, he jokes that he had “maybe just a half chub.”

Maybe just a half chub.

MAYBE JUST A HALF CHUB.

May the world end long before Brody is no longer a reality television fixture.

Sidebar: Am I the only human who scream-laughed like a maniac who'd just downed one of those mega-sized Pixy Stix when the zip-lining guide asked a sobbing Kim for her name? That threw me for a loop, and I can only imagine what it was like for Kim, aka One Of The Most Famous People On The Planet. How long do you think it's been since someone actually asked Kim what her name is? Yeah, I realize there are plenty of people who don't keep up with the Kardashians, but I'm going to guess it's been years since Kim last encountered a person who didn't know exactly who she is. That normally normal question must strike Kim as a not normal question. Strange, even. Like someone staring at her hands and asking her if she has fingernails.

There is a part of me that hopes that the zip-lining guide totally knew who she was and just wanted to psych her out. Whatever the case may be, I am pleased as punch (or whatever that beverage was that reminded Bruce of Rob) the moment made the cut.

More like this
Howard Stern's Net Worth: Is He The Richest Man In Radio?
By Hugh McIntyre
Kris Jenner Drunkenly Toasts Khloé Kardashian’s 38th Birthday With This Speech
By Grace Wehniainen
RHOA’s Kenya Moore Said Her Friendship With Marlo Hampton Is “Too Far Gone”
By Brad Witter
Fans React To Kelly Holmes’ “Extraordinary” ITV Documentary
By Sam Ramsden
Get Even More From Bustle — Sign Up For The Newsletter