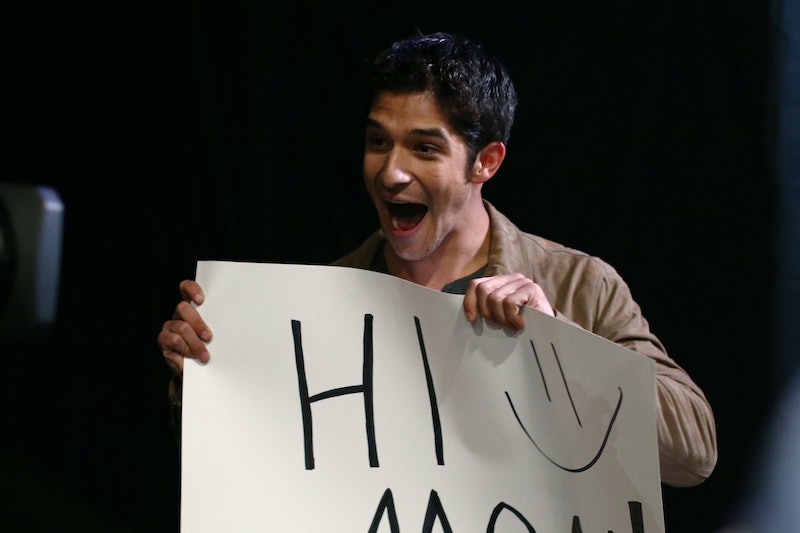 Say what you will about the Grammys and the Oscars, but if you want insight into the cultural zeitgeist, your best bet is to look at who is making an appearance at the Teen Choice Awards. According to reports, Teen Wolf star Tyler Posey will host this year's Teen Choice Awards while stars like Pretty Little Liars Keegan Allen, Lucy Hale, Ian Harding, and Tyler Blackburn are all slotted to make a special appearance. MAGIC! and Rixton are slated to perform live on the show, just in case you haven't heard "Rude" and "Me and My Broken Heart" enough times on the radio. The whole thing is very 2014.

The Teen Choice Awards really are like a time capsule for right-this-minute pop culture — after all, if these awards happened last year, most of us would have went "Rixton who?!" Even Posey as host is surprising — though the Teen Wolf star scored a nomination last year as Choice Summer TV Star, almost all of the TV categories were picked up by ABC Family's mystery drama Pretty Little Liars. Now, Teen Wolf's fandom has grown even stronger — while there's no telling whether the show's fans can truly surpass the highly-devoted PLL fan base, Teen Wolf fans did just prove their loyalty by raising $25,000 for the Sterek Campaign Charity project. (That's the shipper name for Stiles and Derek, for those of you less "in the know.")

It's amazing to see how the lineup for the 2012 Teen Choice Awards was radically different than it is today. Back in 2012, Kevin McHale of Glee co-hosted with Demi Lovato (back when Glee was a thing people still mostly enjoyed) and featured a performance by Carly Rae Jepsen (singing "Call Me Maybe," because obviously). Both Robert Pattinson and Taylor Lautner (haven't heard that name in a while) scored surfboard awards. Jersey Shore's Pauly D took over the DJ booth for the night.

The Teen Choice Awards are truly a time capsule of all the things that were important to us for a hot minute, and while some things are built to last past the moment (Pretty Little Liars forever) the awards show also represents the things that we'll get sick of in oh, 20 minutes or so. (Twilight and Jersey Shore, for example.) But whether the things we see on the Teen Choice Awards are forever or fleeting, it's always a fun time.

More like this
The 'Teen Wolf' Creator Revealed If 'Wolf Pack' Takes Place In The Same Universe
By Grace Wehniainen
Ashton Kutcher Wants Danny Masterson “To Be Found Innocent” In Rape Retrial
By Jake Viswanath
This 'Gossip Girl' Wardrobe Error Has Gone Viral On TikTok
By Alyssa Lapid
All The ’70s Easter Eggs You Missed In 'That ’90s Show'
By Grace Wehniainen
Get Even More From Bustle — Sign Up For The Newsletter
From hair trends to relationship advice, our daily newsletter has everything you need to sound like a person who’s on TikTok, even if you aren’t.